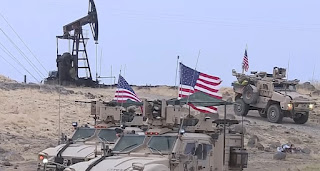 To withdraw, or not to withdraw? That is the question Donald Trump, in his own inimitable way, has answered both ways.

First came the withdrawal. It was real, and had a significant effect. Trump ordered the removal of US troops from Kurdish areas, putting an end to the prospect of an independent Kurdish statelet, split off from Syria. Such a partition was always implausible, given the general balance of forces in the region and the specific refusal of NATO-member Turkey to accept any such thing. (Turkey had already invaded Syria in 2016, and the Obama-Biden administration ordered the Kurds to accept it.) It was also a lynchpin of the longstanding Plan B for dismembering the Syrian state. As I argued in a previous article, agreeing with "the entire spectrum of US-imperialist politics and media," Trump's withdrawal decision "marked ' a major turning point in Syria's long war' and has, indeed, ' upended decades' of imperialist and Zionist plans for the Middle East."

But, as I also noted, Trump is impulsive, shallow, and weak, and "surrounds himself with neocon deep-state actors on whom he depends and who often ignore or actively oppose"his non-interventionist instincts," and who "may yet get him to reverse that [decision] or over-compensate for it."

And thus it came to be. Kinda-sorta.

We quickly saw what Philip Giraldi calls an "all too characteristic Trumpean flip-flop." Under "pressure from congress and the media"--including powerful Republican senators like Mitch McConnell, Marco Rubio, Mitt Romney, and especially Lindsay Graham-"who were bleating over how the departure of U.S. troops was a grave mistake," Trump turned "the greatly ballyhooed 'withdrawal' from Syria" into something "more like a relocation of existing military assets." US troops ended up moving from Kurdish areas to "secure" the oil fields in eastern Syria. As Giraldi says, "the number of American soldiers in Syria may have actually been increased with armor units being transferred from their base in Iraq."

Of course, the notion that the US military presence is there to protect the oil from ISIS, or to seize it for the financial benefit of the US, is a pitch that was crafted for the one-man gullible enough to believe it: Donald Trump. It was crafted by those whom Foreign Policy (FP) reporter Lara Seligman calls the "Iran hawks" who have "repeatedly sought to reverse Trump's Syria withdrawal over nearly two years," and "are still trying to persuade Trump to keep a residual presence in Syria."

Joshua Landis, Director of the Center of Middle East Studies at the University of Oklahoma, speaking to NPR, calls them the "many elements of our foreign policy establishment that want to roll back Iran and want to stay in Syria for the long haul," and who knew that "Throwing the oil wells in front of President Trump was a way " they could reanimate his interest in staying in Syria."

Related Topic(s): Iraq; Israeli Iran Conflict; Israeli Pressure On US; Lebanon; Neocons; Syria; Syria Oil; Syrian Withdrawal; Trump Foreign Policy; Trump Impeachment; (more...) War On Iran, Add Tags  (less...)
Add to My Group(s)
Go To Commenting
The views expressed herein are the sole responsibility of the author and do not necessarily reflect those of this website or its editors.