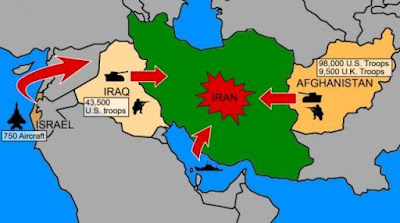 It was a helluva week on the Iran front. It started with attacks on two tankers in the Gulf of Oman on June 13th and ended with Donald Trump ordering, and then calling off, a military attack on Iran on June 20-21. How we got from beginning to end of that chapter in the ongoing US-Iran saga is worth close consideration.

Like everyone else who can say "Gulf of Tonkin," "Remember the Maine," and "Iraqi WMDs," my instinctive reaction to the attacks on two tankers, a month after explosions hit four oil tankers in the UAE port of Fujairah, was: "Oh, come on now!" We know the United States, egged on by Israel and Saudi Arabia, has been itching to launch some kind of military attack on Iran, and we are positively jaded by the formula that's always used to produce a justification for such aggression.

It seemed beyond credibility that Iran would attack a Japanese tanker, the Kokuka Courageous, at the moment the Prime Minister of Japan was sitting down with Ayatollah Khamenei in Tehran. After all, Iran is eager to keep its oil exports flowing, so it would hardly want to so flagrantly insult one of its top oil customers.

Nor did it seem to make sense that Iran would target a Norwegian vessel, Front Altair. That tanker is owned the shipping company, Frontline, which belongs to Norway's richest man (before he moved to Cyprus), John Fredriksen. Fredriksen made his fortune moving Iranian oil during the Iran-Iraq war, where his tankers came under constant fire from Iraq, and were hit by missiles three times. He became known as "the Ayatollah's lifeline." Furthermore, as the Wall Street Journal reports, Fredriksen's Frontline company has continued to help Iran move its oil in a way that evades sanctions. A friendlier resource Iran has not. This is the guy Iran chose to target, in another gratuitous insult?

Then there's the smoky-gun "evidence": a grainy video of somebody doing something on the side of some ship, which looks like it came out of an episode of Ghost Hunters. I encourage everyone to read this Twitter thread, which includes the observations:

I count 10 people on board this vessel.

That also could very well be a magnetic mooring line they are removing, because we have such trash resolution on the video.

Lastly, these sailors clearly are working out of the mine clearance handbook:

"when clearing mines ensure that you have your 10 best friends standing behind you. That way if it blows they can catch you and you won't fall down."

Because they probably weren't clearing mines.

All of this--the history of US false-flags and war-justifying lies, the specifics of the targets hit, and the risibility of the evidence presented--made it very difficult for the Trump administration to assemble a critical mass of domestic or international consent for a military attack on Iran.

Related Topic(s): Iran; Iran Embargo; Iran Nuclear Deal; Iran Versus Israel; John Bolton Warmonger; Sanctions; Trump And Bolton, Add Tags
Add to My Group(s)
Go To Commenting
The views expressed herein are the sole responsibility of the author and do not necessarily reflect those of this website or its editors.