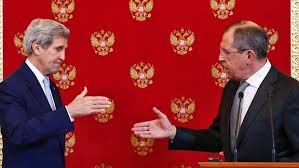 The recapture of Aleppo by the Syrian Arab Army and its allies marks a turning point not only in the conflict in Syria, but also in the dynamic of international conflict. For the first time since the dissolution of the Soviet Union, the rolling imperial engine of regime change via American-led military intervention has been stopped in its tracks. To be sure, it's certainly not out of service, even in Syria, and it will seek and find new paths for devastating disobedient countries, but its assumed endgame for subjugating Syria has been rudely interrupted. And in our historical context, Syria interrupted is imperialism interrupted.

Let's remember where things stood in Syria seventeen months ago. After a four-year campaign, directed by the United States, thousands of jihadis in various groups backed by the US/NATO, the Gulf monarchies, Turkey and Israel, were on the offensive. ISIS occupied Palmyra, Raqqa, and swaths of territory, and was systematically raping, beheading, and torturing Syrian citizens and looting and destroying the country's cultural treasures. Al-Qeada/al-Nusra had triumphantly poured into the eastern part of Aleppo, Syria's largest city (and one of the oldest inhabited cities in the world), were beheading and crucifying their newly-subjugated Syrian captives, and were beginning their siege of the larger and more populous part of that city. Turkey had commenced military operations on Syrian territory against Kurdish forces (who had won significant victories against ISIS), and was enabling the transit of foreign jihadis into Syria and convoys of ISIS oil through its territory. Against these dispersed offensives, the Syrian Arab Army was undermanned and overstretched.

As John Kerry himself later admitted , in a meeting with Syrian opposition, the Obama administration saw the ISIS advance as a positive development: "[W]e know that this was growing, we were watching, we saw that DAESH [ ISIS] was growing in strength, and we thought Assad was threatened. [We] thought, however, we could probably manage that. Assad might then negotiate."(By "negotiate," Kerry meant "capitulate"--negotiate the terms of his abdication.) For the Serious People in Washington, this--the impending takeover of Syria by ISIS and Al-Qaeda jihadis--meant things were going swimmingly. (Al-Nusra was at the time--and still is, less officially--the affiliate of Al-Qaeda in Syria.) As Daniel Lazare pointed out : "After years of hemming and hawing, the Obama administration has finally come clean about its goals in Syria. In the battle to overthrow Bashar al-Assad, it is siding with Al Qaeda"[R]ather than protesting what is in fact a joint U.S.-Al Qaeda assault, the Beltway crowd is either maintaining a discreet silence or boldy hailing Al Nusra's impending victory as ' the best thing that could happen in a Middle East in crisis.'"

You read that right. As one al-Nusra commander said: "We are one part of al-Qaeda"The Americans are on our side."


ISIS? We can manage that.

Related Topic(s): Al-Qaeda; Internationalism; Intervention; Russia; Russia - Syria Treaty; Russian Military Strategy; Syria; Syria Rebels; Syria Revolution; Syrian Arab Army, Add Tags
Add to My Group(s)
Go To Commenting
The views expressed herein are the sole responsibility of the author and do not necessarily reflect those of this website or its editors.

STAY IN THE KNOW
If you've enjoyed this, sign up for our daily or weekly newsletter to get lots of great progressive content.
Series: "Syria"