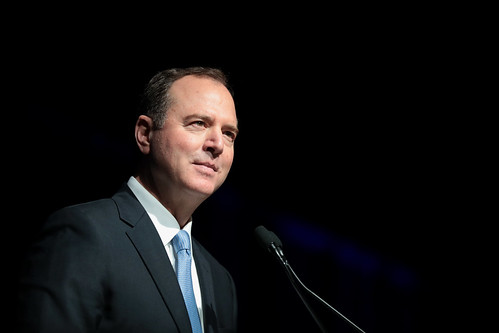 I've had the displeasure to watch some hours of the House Intelligence Committee's impeachment inquiry. It's an excruciating spectacle, alternately boring, confusing, and infuriating.

Where have the Democrats set the high-crime-and-misdemeanor goalpost today? Is it the "Russian collusion" for which Adam Schiff had "direct evidence " even before the Mueller investigation? How about the "10 different episodes of presidential obstruction of justice" for which Jamie Raskin told us "the evidence is overwhelming"? No, really, they got him on "quid pro quo"! Or is it "abuse of power"? Wait, it's "bribery." Final answer. (They focussed-grouped it!). Bombshells all.

I have no interest in parsing the minutiae of the purported case Schiff is now making against Trump. (I'll leave that to Aaron Mate', who does it so well.) I've said before that I think it's political folly. Here, I would like those who are enthralled by the ongoing impeachment frenzy to focus for a moment on one glaring contradiction in the logic of the Democrats' position--a contradiction that reveals that the Democrats are speaking with forked tongue about what they are actually trying to do

Prime Directive A: The Absolute Most Important Thing Ever In The History Of The Universe (or at least The American Republic) Is To Defeat Trump in 2020.

We've heard this incessantly from Democrats since election day 2016. For establishment Democrats, this injunction governs all political discourse and behavior in the party. It has been the bedrock mandate for Democrats going into election 2020, the basis of a hoped-for party discipline in the primary debates. It requires that any "left" candidate (only Bernie and Tulsi could be so characterized, and only Bernie is a real electoral threat) must temper his or her promotion of system-changing social policies like Medicare-for-All or an end to regime-change wars, and refrain from sharply calling out reactionary " nothing will fundamentally change" opponents. The most consequential questions and debates about social policies that affect all Americans must be subordinated to the imperative to win the 2020 presidential election. Don't be divisive. Don't criticize "centrist"--i.e., reactionary and imperialist--Democrats. Vote Blue No Matter Who.

In May, Nancy Pelosi herself defined Democratic strategy--and, it's important to note, her refusal at the time to pursue impeachment--in terms of this injunction, as "focused on pursuing center-left policies she thinks will help her party out in 2020 -- a focus on pragmatic improvements " that emphasizes beating Mr. Trump." And she and her colleagues have continued to enforce that injunction on the Party since.

Related Topic(s): Democrats; Impeachment; Impeachment Hearing; Nancy Pelosi; Trump, Add Tags
Add to My Group(s)
Go To Commenting
The views expressed herein are the sole responsibility of the author and do not necessarily reflect those of this website or its editors.