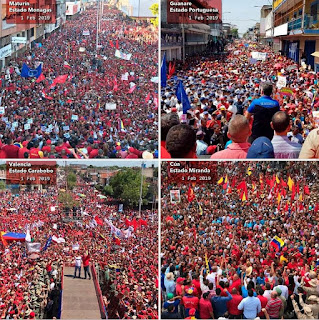 Not on CNN or MSNBC. Four of the huge pro-government rallies held throughout Venezuela on February 1st
(Image by PSUV)   Details   DMCA

The United States government's new offensive against Venezuela is an act of naked imperialism.

I predicted last year that Venezuela would be the first new country hit by the Trump administration's indispensable need to establish its American-exceptionalist, "Presidentialist," bona fides. It is the Goldilocks target. Not too small: It is, in fact, a significant country with world's largest oil reserves, and a proclaimed socialist government that's been a thorn in the gringo boot on Latin America for almost twenty years. Not too big: It's no military match for U.S. & Latin American proxy armed forces, and nobody will start WWIII to defend it. Just right: A decisive win, at little apparent cost. And just the kind of amuse-bouche needed to get the U.S. population's juices flowing for a more costly and difficult attack on the ultimate target-Iran. At least, that's the way they think.

But I couldn't anticipate the anger and frustration I would feel, seeing this crock of sh*t being shoved down the throats of the world, and being swallowed whole by the bipartisan political and media establishment, with nothing more than a few hard gulps from even most U.S. "progressives."

The United States is attempting to seize control of another sovereign nation, Venezuela. Having no speck of standing within Venezuela or in international law, the U.S. is resorting to regime change by edict. The Trump administration has simply proclaimed that the President of Venezuela, Nicola's Maduro, recently re-elected with over 6 million votes (68%), is now replaced by Juan GuaidÃ³, who had not even run for the office and therefore received zero votes (0%), and whom 81% of Venezuelans had never heard of. But, like a good bench-warmer, GuaidÃ³ got the dreamed-for call from the coach-literally, a phone call from the offensive coordinator U.S. Vice President-and the next day swore himself in as President of Venezuela, under the authority granted to him by the government of the United States. All The Right Moves.

Somehow these electoral results add up to the fact that Maduro is a "dictator." Somehow the electoral system that, in 2012, the notorious socialist rag Forbes called "A Model For The World" and Jimmy Carter called: "the best in the world"--the same one that was A-OK in 2015, when it produced an opposition win in the National Assembly elections-was "illegitimate" and a "sham" in 2018.

We know this because the hardline Venezuelan opposition faction said so. That's the faction that refused to participate along with the other sixteen parties in the early election the opposition parties called for, and which asked international institutions not to send observers (a demand request most of those institutions, for some reason surely unrelated to U.S. bribes and threats, obeyed). We know this because the U.S. government, which threatened the government of Venezuela with further sanctions for holding the elections, and threatened the main opposition candidate (Henri FalcÃ³n) with individual sanctions for participating-said so. We know this because a whole bunch of Serious People who didn't set foot in the country said so.

We know the election was a "sham" despite the fact that over 300 international election observers who were actually present in Venezuela found, as the EU delegation said, that the elections were "fraud-proof [and] were conducted fairly." Reasonable, since an outstanding 54% of voting machines were audited against hand-counted paper ballots, in front of representatives of all parties and open access to citizens, with results posted locally. Which is perhaps why "no evidence or concrete reports of fraud have been presented." (Please do judge for yourself here, and here, and here.)

We know this because the U.S. government and its Serious Sycophants are the arbiters of what's "democracy" and what's "dictatorship" and what's good for Venezuela, and if they declare that the guy who won a couple of elections by millions of votes is a "dictator," and the guy who did not even run is the "legitimate" President-well, that's one of those new proclamations that becomes an established fact because all the Right People keep saying it. What it's not, what you can never suggest it may be, is a crock of excuses for the U.S. and its Venezuelan compradors who didn't want to participate in an election that they knew they could not win.

(You might notice the new rule, which we've seen in Palestine, with EU-treaties, and now Venezuela: elections don't count unless you get the result the Serious People want.)

In true Orwellian fashion, these proclaimed facts not only become taken for granted across the political and media spectrum, they also re-write a whole history retroactively. Not only are we to embrace as fact that the same Bolivarian government which a few years go organized the best election process in the world has this year organized a "sham" election, we are to forget that that government ever was, or could have been, anything but a "dictatorship." We were always at war with Oceania, and the entire history of Chavismo and the Bolivarian socialist movement was always unrelieved dictatorship and repression. Hugo Chavez-the guy who won numerous elections, including the one an American president called "the best in the world "-always was, according to Bernie Sanders, a "communist dictator." And Juan GuaidÃ³ is and always was a social democrat.

Thus, U.S. politicians and media relentlessly portray Maduro as some kind of Saddam reincarnated, an implication of dictatorial brutality that is, or should be, too obviously ludicrous. The opposition speaks its mind everywhere in Venezuela. Private and oppositional media control between 74-92% of the audience. The guy who is openly, with the support of a foreign country, usurping the presidency, calling for a coup by the Venezuelan army, and making it clear that he's open to a military attack by the US to overthrow the government and secure his position, is zipping around Venezuela giving interviews and press conferences. If there's one thing Maduro has failed at, it's being a "dictator."

Related Topic(s): Imperialism; John Bolton; Trump And Bolton; Venezuela; Venezuelan Coup, Add Tags
Add to My Group(s)
Go To Commenting
The views expressed herein are the sole responsibility of the author and do not necessarily reflect those of this website or its editors.