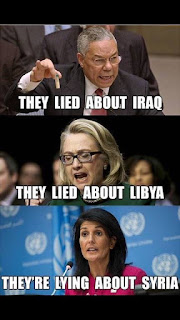 
The United States is at war with Syria. Though few Americans wanted to face it, this has been the case implicitly since the Obama administration began building bases and sending Special Ops, really-not-there, American troops, and it has been the case explicitly since August 3, 2015, when the Obama administration announced that it would "allow airstrikes to defend Syrian rebels trained by the U.S. military from any attackers, even if the enemies hail from forces loyal to Syrian President Bashar al-Assad." With the U.S. Air Force--under Trump, following Obama's declared policy--shooting down a Syrian plane in Syrian airspace, this is now undeniable. The United States is overtly engaged in another aggression against a sovereign country that poses no conceivable, let alone actual or imminent, threat to the nation. This is an act of war.

As an act of war, this is unconstitutional, and would demand a congressional declaration. The claim, touted by Joint Chiefs' Chairman, Gen. Dunford, that the 2001 Authorization for the Use of Military Force (AUMF) against al-Qaeda provides constitutional justification for attacking the Syrian government is patently false and particularly precious. In the Syrian conflict, it's the Syrian government that is the enemy and target of al-Qaeda affiliates; it's the U.S. and its allies who are supporting al Qaeda. The authorization to fight al-Qaeda has been turned into an authorization to help al-Qaeda by attacking and weakening its prime target!

Will President Trump ask for a relevant congressional authorization? Will any Democratic or Republican congresscritter demand it? Is the Pope a Hindu?

Would it make any difference? Why should Trump bother? Obama set the stage when he completely ignored the War Powers Act, the Constitution, Congress, and his own Attorney General and legal advisers, and went right ahead with a war on Libya, under the theory that, if we pretend no American troops are on the ground, it isn't really a war or "hostilities" at all. Which I guess means if the Chinese Air Force starts shooting down American planes in American airspace in defense of Black Lives Matter's assault on the White House, it wouldn't really be engaging in an act of war.

It's impossible to overstate the danger in these executive war-making prerogatives that Obama normalized--with the irresponsible connivance of his progressive groupies, who pretend not to know where this would lead. In 2012, referring to the precedent of Obama's policies, Mitt Romney said: "I don't believe at this stage, therefore, if I'm president that we need to have a war powers approval or special authorization for military force. The president has that capacity now." Following Obama, for Trump, and every Republican and Democratic president, it now goes without saying.

In terms of international law, as an aggressive, unprovoked aggression against a country that makes no threat of attack on the U.S., it is also patently illegal, and all the political and military authorities undertaking it are war criminals, who would be prosecuted as such, if there were an international legal regime that had not already been undermined by the United States.

Syria is now under explicit attack by the armed forces of the U.S., Turkey, and other NATO states. Sixteen countries have combat aircraft buzzing around Syrian airspace under the effective command of the United States, and a number of them have attacked Syria's army.

Americans, and certainly self-identified "progressives," have to be crystal clear about this: American armed forces have no right to be in Syria, have no right to restrict the Syrian government from using any of its airspace, or to prevent it from regaining control of any of its own territory from foreign-backed jihadi armies.

The Syrian state and its allies (Iran and Russia), on the other hand, are engaged in the legitimate self-defense of a sovereign state, and have the right to respond with full military force to any attack on Syrian forces or any attempt by the United States to balkanize or occupy Syrian territory, or to overthrow the Syrian government. Whether and how they do respond will depend on their own military/political calculus, about which they have so far been quite careful and restrained. It would be the height of foolishness, as well as arrogance, for Americans to presume they can bully these actors into submission with an infinite series of discrete aggressions, with no sharp counterattack. Unfortunately, the world has not yet seen the limits of American arrogance.

So please, do not pretend to be shocked, shocked, if Syria and its allies fight back, inflicting American casualties. Don't pose as the morally superior victim when Americans are killed by the people they are attacking. And don't be preaching about how everyone has to support our troops in a criminal, unconstitutional, aggressive attack on a country that has not threatened ours in any way. American soldiers and pilots executing this policy are not heroes, and are not fighting to protect America or advance democracy; they are the international equivalent of home invaders, and as such are legitimate targets with no claim to "self-defense." The only heroic act they could do is refuse their superiors' illegitimate orders to engage in this aggression.

In response to American attacks, the Syrian Army has every right to strike back at the American military apparatus, everywhere. Every casualty of this war, however big it gets, is the ethico-political responsibility of the attacking party -- US. The first responsibility of every American is not to "support our troops," but to stop this war. Right now. Before it gets worse.

It's quite obvious, in fact, that the United States regime is deliberately making targets of its military personnel, in the hopes of provoking a response from Syrian or allied armed forces that will kill some Americans, and be used to gin up popular support for the exactly the kind of major military attack on Syria and/or Russia and/or Iran that the American people would otherwise reject with disgust. Anyone who professes concern for "our troops" should be screaming to stop that.

It's also quite clear now that the War on ISIS is a sham, that ISIS was always just a pretext to get the American military directly involved in attacking the Syrian army and destroying the coherence of the Syrian state. If the U.S. wanted to defeat ISIS, it could do so easily by coordinating their actions with, and not against, the forces who have been most effectively fighting it: the Syrian Arab Army, Russia, Iran, and Hezbollah.

Related Topic(s): Al-Qaeda; Syria; Syrian Arab Army; Syrian Situation; War On Syria, Add Tags
Add to My Group(s)
Go To Commenting
The views expressed herein are the sole responsibility of the author and do not necessarily reflect those of this website or its editors.

STAY IN THE KNOW
If you've enjoyed this, sign up for our daily or weekly newsletter to get lots of great progressive content.
Series: "Syria"