"The conquest of the earth, which mostly means taking it away from those who have a different complexion or slightly flatter noses than ourselves, is not a pretty thing when you look at it too much""-- Joseph Conrad "Heart of Darkness" [h/t William A. Cook]

The Israeli-American (Let's never forget this is a team effort!) slaughter in Gaza is so horrifying that I've been at a loss to find the words to comment on it without letting anger get the better of me. The media coverage of what's happening, dominated by the ridiculous notion that Israel is "defending" itself, is so grotesquely mendacious, hypocritical, and racist (imbued with colonialist ethno-supremacism) that it is hard to know where to begin critiquing it--without, again, becoming enraged.

For the moment, I'll focus on one particular, insistent meme, constantly being promoted by Israel and its apologists, namely that Hamas is using civilians as "human shields." The idea is that for Hamas to place any kind of military personnel anywhere in or near a civilian neighborhood constitutes using all the civilians in that neighborhood as "human shields." Furthermore, it makes of that neighborhood a legitimate "military" target for devastating Israeli attack, absolves Israel from any culpability for the scores of resulting dead, blown-apart civilians including children, and places all moral and legal responsibility for those victims on the Palestinian resistance fighters who dared appear anywhere near civilians.

So, for example, the personal homes of Palestinian political and military leaders, construed as "command and control centers," are legitimate military targets. If a Hamas functionary lives with his family of five children in an apartment building of 8 stories with 4 apartments per floor, it is perfectly legitimate to bomb that building and kill all 32 families--"human shields," after all--in order to destroy that "command and control center."

This "human shields" argument is what allows Israeli officials, as Noura Erakat points out, to "openly admit that they are deliberately and systematically bombing the family homes of suspected militants," killing whole families. It suggests an ethic that supposedly justifies an Israeli offensive which produces 75-80% civilian causalities , 33% of which are children, among the Palestinian population (and somehow renders insignificant the contrasting fact that almost 100% of Israeli casualties from Palestinian resistance operations are military). To hear it in the American media, poor, anguished Israel actually becomes the victim of all these "telegenically dead," deliberately sacrificed, Palestinian "human shields."

American political "leaders" and media pundits universally endorse this pretense of an ethic, or at the least, let it pass unchallenged.

Of course, anyone with an ounce of intellectual or moral honesty would have to accept that such an ethic was universally applicable: Kill by that ethic, die by that ethic.

As Amira Hass points out, "the [Israeli] Defense Ministry is in the heart of Tel Aviv, as is the army's main "war room." [These are real "command and control centers"] And"the military training base at Glilot [is] near the big mall" And the Shin Bet headquarters [is] in Jerusalem, on the edge of a residential neighborhood." If Israel's claimed ethic were anything other than the flimsiest excuse for its presumed ethno-supremacist license to kill, Israel and its supporters would have to accept that Hamas has at least as much right to fire its crude rockets in the general direction of the Israeli Ministry of Defense as Israel does to blow up homes, schools, and hospitals with its precision weapons--civilian casualties be damned. By Israeli logic and ethic, are not the Israeli civilians near these military facilities "human shields"? When they get killed, should we not sympathize with the anguished Hamas rocketeers who were forced to kill the civilians that Israel cleverly placed in dangerous neighborhoods?

[Actually, unless one is comfortable with colonialism, it's arguable that Hamas has every right to its attacks, and it's inarguable that Israel has no right to theirs.]

We all know, of course, that there is no intellectual or moral consistency here, only the ethic of ethno-supremacist, colonialist "exceptionalism." Can you imagine the moral outrage and gnashing of teeth on the part of the oh-so-tough-minded American political and media personalities who accept the Israeli "human shields" argument if anyone tried to apply it to hundreds of dead Jewish children? If this were the scene, day after day, for Israeli Jews: 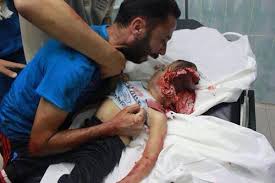 But we need to take a step back to see how Israel is deliberately and dishonestly confusing a specific definition of "human shields" with a more general notion of something like "collateral damage" in a way that tries to justify the viciousness of its current massacre in Gaza.

As Brad Parker, of Defence for Children International Palestine, points out:

the use of civilians as human shields is prohibited under international law and involves forcing civilians to directly assist in military operations or using them to shield a military object or troops from attack. The rhetoric continually voiced by Israeli officials regarding "human shields" amounts to nothing more than generalisations that fall short of the precise calculation required by international humanitarian law when determining whether something is actually a military object.

Israel is using the "human shield" argument in a way that dilutes is specific meaning in international law, and turns it into another catchall bugaboo, used to hinder careful thought and justify the unjustifiable. Israel finds "human shields" everywhere there are civilians in the way the U.S. government now finds "weapons of mass destruction" anywhere there's "an explosive or incendiary charge of more than one-quarter ounce."

It's particularly brazen for Israel to be raising and confusing the "human shields" issue because it is Israel itself which has repeatedly used the specific, prohibited tactic of using children as "human shields" to protect its military forces. According to the U.N. Committee on the Rights of the Child, along with the torture, solitary confinement, and threats of sexual assault toward detained children, Israel is guilty of the "continuous use of Palestinian children as human shields and informants." The report, issued last year, cites14 cases in 3 years.

We're not talking here about some vague notion of endangering children by allowing them to live in a dangerous town. Nor are the accusations limited to namby-pamby UN Committee that no red-blooded American/Zionist would pay any attention to.
We're talking about specific practices, identified and denounced by the High Court of Justice in Israel, "like the 'neighbor procedure,' whereby neighbors of wanted Palestinians are forced to go into the wanted man's house ahead of troops, in case it is booby-trapped." Here's a picture, from The Guardian in 2007, of Sameh Amira, 24, who--along with his15-year-old cousin Amid, and an 11-year-old girl, Jihan Dadush--was forced to act as a human shield to search homes in Nablus during a search for bomb-making labs. They were forced them to enter apartments ahead of the soldiers, and to search the houses, emptying cabinets and cupboards, in order to protect the most-moral IDF boys from getting hurt. 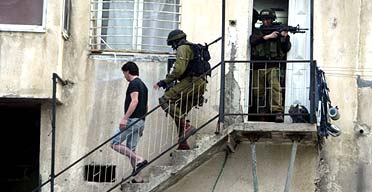 And here's a picture of a 13-year-old Palestinian boy lashed to the front of an Israeli armored vehicle to prevent stone throwers from" What? Damaging the clearcoat?

These are human shields, in the strong and specific sense, and it is Israel that has a history of using them.

And, according to a report in Mondoweiss, there is evidence that Israel is using these explicit human shield tactics in the present conflict. One resident of Khuza, Ayman Abu Toaimah, reports that: "As Israeli invading troops advanced to the village they besieged it and used residents as human shields." Another, Abu Saleem, 56, says: "Israelis claim that Hamas is using us as human shields-- how? This is a lie, we do not see fighters in the streets. It's them, the Israelis who used us as human shields in Khuza'a and Shuja'iyeh. They turned our houses into military posts, terrified residents in the houses." And a third, Abu Ali Qudail, said: "When the ICRC told us that ambulances are waiting us at the entrance of the village from the western side, about 1,000 people rushed to leave their homes, some of which were used as a hideout for Israeli forces."

Here's a good rule of thumb: Every nasty tactic that Israel accuses the Palestinians of using is one that they are actually the masters of. It's called projection, and you'll be understanding the world a lot better if you consider that most of the accusations Israel (as well the United States) makes against its enemies are projections of its own faults and crimes. Do you think for a second that, if there were one piece of evidence as clearly dispositive of Hamas's use of human shields as the pictures above, you would not have seen it all over the news every day?

Corollary question: With all the constant chatter about "human shields," why does none of this factual evidence about Israel's use of the human shield tactic ever enter into the media discourse?

Because American politics and media are in complete collaboration with the colonial savagery that is Zionism, and they do not want to disturb the American public's acquiescence to that. This is a stance that must be refused, with contempt. As Congress approves unanimously and Obama supplies the weapons, no American can think s/he stands in a neutral space, shielded from the nasty effects of the decision s/he is making--whether by resting silently complicit or by speaking up in protest.

Photos: A Gaza funeral for 26 members of one family | +972 Magazine

In Gaza, 11 members of a Palestinian family are killed in a single strike - The Washington Post

Netanyahu's 'Telegenically Dead'; Comment Is Grotesque but Not Original - The Intercept

No, Israel Does Not Have the Right to Self-Defense In International Law Against Occupied Palestinian Territory, By Noura Erakat

Israel showed restraint in Gaza before attacking? You must be kidding / Amira Hass]

What's not a target for Israel? - Opinion - Al Jazeera English

Related Topic(s): Gaza Invasion; Human Shield; Israel Attacks Gaza; Israeli Attacks On Gaza; Israeli_Propaganda; Seige Of Gaza; War On Gaza, Add Tags
Add to My Group(s)
Go To Commenting
The views expressed herein are the sole responsibility of the author and do not necessarily reflect those of this website or its editors.

STAY IN THE KNOW
If you've enjoyed this, sign up for our daily or weekly newsletter to get lots of great progressive content.
Series: "Israel and "Human Shields""

"Just as The Tipping Point provides an explanation for big changes, Rob Kall offers a unified explanation for the magic behind the success of the biggest tech companies, the Arab Spring, Occupy and the social media revolution┬ģ An important, big picture, visionary approach weaving together technology, economics, evolution, science and personal relationships -- even happiness -- to describe a wave of change as significant as the invention of the printing press that is well under way -- a wave that could rescue the planet from the top-down system that afflicts the planet."