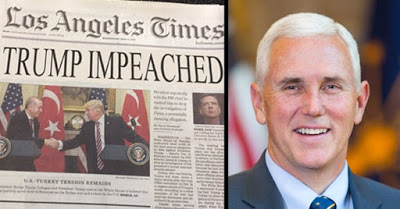 The two-year Mueller investigation of Donald Trump's alleged collusion ("largely synonymous with conspiracy") with Russia is over. Nothingburger.

The 448-page Mueller Report has been published in full, and made into a dramatic hour-and-twenty-minute stage performance adapted by a Pulitzer Prize-winning playwright with a cast of Hollywood stars. Yawn.

Then there was the seven hours of Mueller himself testifying before two committees of Congress and the public. Painful, "very, very painful."

One might expect that the Democratic Party's #Resistance would abandon its attempt to unseat Donald Trump through litigation, in the face of the glaring fact that this whole Russiagate/Mueller Investigation thing has only been of great political benefit, a "massive gift," to Donald Trump. Seeing all the chips flow to your opponent, you gotta know when to fold 'em and play a new hand.

One might think a shrewd and serious #Resistance would perhaps switch to a strategy of frontal political assault that highlights substantive alternatives to reactionary social and foreign policies, where Trump is vulnerable for increasing inequality, social insecurity, and foreign aggression. 'Cause, you know, as Nathan Robinson puts it: "People are upset because they're drowning in debt, their rent is too damn high, they can't afford their health insurance and they are working crappy jobs," not because Konstantin Kilimnik got some polling data. One might think, with Robinson, that "hopefully we can put this pathetic chapter in American politics behind us."

One who thinks this, however, would be underestimating the #Resistance's capacity for self-delusion. As I put it previously, "The Mueller Investigation never happened and will never end." Matt Taibbi chronicles how, "in the space of a single news cycle," Mueller's testimony was turned from a "disaster" by a "struggling," "old and often confused" aging bureaucrat into another heroic victory for the regiments of the #Resistance, led by Mueller, the "Trump Hunter," a man whose "face was a portrait of rare depth, the sort one is more likely to find on a Leonardo da Vinci canvas "[or on] paintings of the Agony in the Garden, showing Jesus' upturned face as he prayed."

Yup, having lost a big political pot with its "Russian collusion" high card, the #Resistance Dems and media are now on full tilt with the "obstruction of justice" hand they say Mueller Agonistes has dealt them. Gotta love those Aces and Eights!

Related Topic(s): Democrats; Impeachment; Progressives; Russiagate; Trump, Add Tags
Add to My Group(s)
Go To Commenting
The views expressed herein are the sole responsibility of the author and do not necessarily reflect those of this website or its editors.