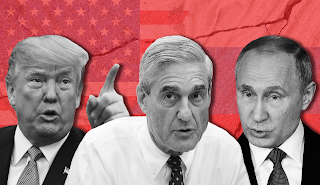 So the Mueller investigation is over. The official "Report on the Investigation into Russian Interference in the 2016 Presidential Election" has been written, and is in the hands of Attorney General William Barr, who has issued a summary of its findings. On the core mandate of the investigation, given to Special Counsel Mueller by Rod Rosenstein as Acting Attorney General in May of 2017--to investigate "any links and/or coordination between the Russian government and individuals associated with the campaign of President Donald Trump"--the takeaway conclusion stated in the Mueller report, as quoted in the Barr summary, is that "[T]he investigation did not establish that members of the Trump Campaign conspired or coordinated with the Russian government in its election interference activities.1"

In the footnote indicated at the end of that sentence, Barr further clarifies the comprehensive meaning of that conclusion, again quoting the Report's own words: "In assessing potential conspiracy charges, the Special Counsel also considered whether members of the Trump campaign 'coordinated' with Russian election interference activities. The Special Counsel defined 'coordination' as an 'agreement--tacit or express--between the Trump Campaign and the Russian government on election interference'."

Barr restates the point of the cited conclusion from the Mueller Report a number of times: "The Special Counsel's investigation did not find that the Trump campaign or anyone associated with it conspired or coordinated with Russia in its efforts to influence the 2016 U.S. presidential election"the Special Counsel did not find that any U.S. person or Trump campaign official or associate conspired or knowingly coordinated with the IRA [Internet Research Agency, the indicted Russian clickbait operation] in its efforts."

This is as clear and forceful a repudiation as one can get of the "collusion" narrative that has been insistently shoved down our throats by the Democratic Party, its McResistance, its allied media, and its allied intelligence and national security agencies and officials. Whatever one wants to say about any other aspect of this investigation--campaign finance violations, obstruction of justice, etc.--they were not the main saga for the past two+ years as spun by the Russiagaters. The core narrative was that Donald Trump was some kind of Russian agent or asset, arguably guilty of treason and taking orders from his handler/blackmailer Vladimir Putin, who conspired with him to steal the 2016 election, and, furthermore, that Saint Mueller and his investigation team of patriotic FBI/CIA agents were going to find the goods that would have the Donald taken out of the White House in handcuffs for that.

Keith Olbermann's spectacular rant in January 2017 defined the core narrative and exemplified the Trump Derangement Syndrome that powered it: an emotional, visceral hatred of Donald Trump wrapped in the fantasy--insisted upon as "elemental, existential fact"--that he was "put in power by Vladimir Putin." A projection and deflection, I would say, of liberals' self-hatred for creating the conditions--eight years of war and wealth transfer capped off by a despised and entitled candidate--that allowed a vapid clown like Trump to be elected. It couldn't be our fault! It must have been Putin who arranged it!

Here's a highlight of Keith's delusional discourse. But, please watch the whole six-minute video below. They may have been a bit calmer, but this is the fundamental lunacy that was exuding from the rhetorical pores of Rachel, Chris, and Co. day after day for two+ years:

The military apparatus of this country is about to be handed over to scum, who are beholden to scum, Russian scum!As things are today January 20th will not be an inauguration but rather the end of the United States as an independent country. Donald John Trump...is not a president; he is a puppet, put in power by Vladimir Putin. Those who ignore these elemental, existential facts--Democrats or Republicans--are traitors to this country. [Emphases in original. Really, watch it.]

This--Trump's secret, treasonous collusion with Putin, and not hush money or campaign finance violations or "obstruction of justice" or his obvious overall sleaziness--was Russiagate.

And it still is. Here's the demonstration in New York last Thursday, convened by the MoveOn/Maddow #Resistance, singing from "the hymnal" about how Trump is a "Russian whore" who is "busy blowing Vladimir":

Related Topic(s): Democrats; Mueller Investigation; Russiagate; Russophobia; Trump Russia Connection, Add Tags
Add to My Group(s)
Go To Commenting
The views expressed herein are the sole responsibility of the author and do not necessarily reflect those of this website or its editors.