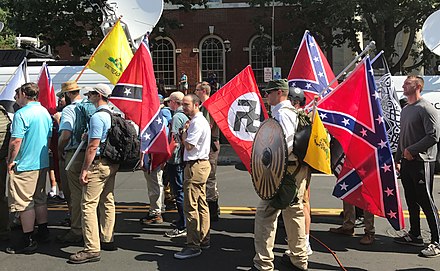 Mark June 11, 2010 as the day that Donald Trump declared the Second Civil War on the United States, and bye-the-bye revealed the foundation of his platform for his 2020 Presidential run. There will be a conventional Republican 2020 Platform as well, filled with such conventional Republican stuff such as de-regulation, reversing Roe v. Wade, reducing/raising tariffs (depending upon Trump's mood at the moment), increasing military spending, "ensuring freedom of choice" in payments for health services, "supporting your police," "America first," "Up with the 2nd (Amendment)," "standing tough on immigration," and so on and so forth.

But the real platform --- and the underlying Republican strategy for securing victory which has nothing to do with any conventional platform --- the drum that Trump will be banging on in rally after rally, will be something else. First, it is well-known that Trump has been gradually withdrawing from compliance the Constitutional Rule of Law that, with the exception of the period during the First Civil War, 1861-65, has governed this nation since its founding in 1789. As documented by me on these pages over time, and by many others, this withdrawal has been underway since he used the services of a foreign power to aid in his election (see the Mueller Report). There are numerous other instances, ranging from the refusal to comply with Congressional subpoenas for information relating to the subject(s) of the Mueller investigation to his refusal to comply with the law and turn over his tax returns to Congress to his arbitrary firings of Inspectors General, and so on and so forth. So Trump, typically in the "Always attack; Never defend" mode, with Barr right at his side on these issues, would also be using "maintaining the power of the Presidency --- for you."

But just yesterday (that is June 11), the central focus of the campaign changed. It is well-known that in 2016 Trump ran on the bedrock, for him, of racism, xenophobia, and religious bigotry. He then continued to underlay his Administration with the same policies, e.g., in terms of dealing with the problem of the undocumented immigrants and asylum seekers. Using the "immigrants" and various other dog whistles --- e.g., Obamacare-bad --- (well, even though it provided health care coverage to many millions of people who otherwise would not have had it, it did have Pres. Obama's name --- you know, the black guy --- on it) he was able to maintain, on the surface, a non-racist image, or at least not an openly racist image. Further he was able to accomplish the Big Three that the combination of his wealthy/corporate Ruling Class supporters and the Religious Right supported him for: massive deregulation, massive tax cuts for the wealthy and the large corporations, and "the judges." Rolling into 2020 he also had "the economy," at least in terms of the Stock Market averages and the apparent employment figures (which covered up the fact that a lot of people were working for barely survival wages, a situation unchanged since 2016).

But then COVID-19 hit, and because Trump's policy-of-denial (well-documented in this space and many others), the disease/death outcome in the U.S., under which we are still struggling, has become one of the worst in the world. In January-February 2020 Trump really believed that talk of its arrival on these shores, creating a tremendous health problem for the U.S. people was a Democratic Party "hoax," designed to weaken Trump as the 2020 election campaign got underway. He was supported in this view on Fox"News," especially Hannity, who, whether he really believed the propaganda or not (and he is nothing if not intelligent) certainly held to that line for weeks despite all the contrary information that had been coming into the White House since the beginning of January.

And then, of course, we have come to the nation-wide Black-Lives-Matter Protests-in-Response-to-the-Murder of George Floyd. Which then spread around the world. And for Trump it's Problem No. 3. It happens that this is one with which he is singularly incapable of dealing in any positive way --- because of his inherent racism. It goes back to the rental discrimination actions undertaken by him and his father in the 1970s, his reaction to "The Central Park Five" mis-carriage-of-justice in the 1980s, right up to the start of his first (trial) Presidential campaign in 2011-12. In that one almost his entire focus was on the racist dog whistle of "birtherism." From these episodes it is obvious that from the depths of his soul Trump is a racist. He doesn't just use racism for political purposes. He really feels it in his bones, just as Adolf Hitler really was an anti-Semite, in his bones. They both used their prejudices for political purposes, but at the same time, they didn't have to make anything up.

But now, as a result of the totally horrible murder of George Floyd, recorded step-by-excruciating step on tape, we have the Black-Lives-Matter movement thrust to the center of the national political agenda. And all of a sudden there is a very broad coalition of peoples demanding change in national race-and-racism policies, just beginning with those that affect policing directly. That is Problem No. 3 with which Trump is totally unable to deal. But this one he cannot manage for reasons that go beyond those that underlie his inability to deal with both Problem No. 1, the Trumpidemic2020©, and Problem No. 2, the oncoming Recession/Depression. The problem for him for those two is simply stupidity, ignorance, a total lack of qualification for being President, and his life-long engagement in the Magical Thinking that has worked so well for him up-to-date, but can't for either of them.

And so, Trump and his people made a big decision today about the future of his campaign and didn't make any secret about that future. After all, what do you do when you are facing a problem and you are running out of options for dealing with it? You go back to what worked for you the first time around, all by itself. And that, of course, was racism. And of course, for Trump, symbolism is at the center of almost everything he does that has any significance. And so today (6-11-20) Trump announces that he is going to hold his first Trump-style rally of the election season. Among other things, no mask-wearing will be permitted (for after all, of course you know mask-wearing is a sign of weakness). But of course, absolutely ludicrously, attendees will have to sign a COVID-19 liability waiver in order to attend.

But more importantly, Trump has made absolutely sure that he is not relying on dog whistles this time. First of all, unless plans change, this Master Racist's rally will be held on June 19, a date known in the African-American and anti-racist communities as "Juneteenth," a holiday celebrating one aspect of African-American emancipation after the end of the First Civil War. Second of all, unless plans change, the rally will be held in Tulsa, OK, the site of what is considered to be the worst post-Civil War massacre of African-Americans, almost 99 years to the day after it occurred. And then Trump, the well-known racist, has the unmitigated gall to tell African-Americans that his appearing in Tulsa on Juneteenth should be seen as a celebration of the day.

Third of all, Trump has least provisionally announced that his acceptance speech for the Republican nomination will be made in Jacksonville, FL, a city with an especially fraught history of racism, racist social policy, and racist violence. And guess what? The date apparently will be almost 60 years to the day after the brutal, KKK, "Ax Handle Massacre" of Aug. 27, 1960. These are not coincidences, matters of happenstance, folks. There are purposeful decisions, taken to do the maximum that they can in mobilizing Trump's racist, gun-carrying followers.

Combine this with, for example, Trump's absolute refusal to consider the renaming of any of the Federal military bases bearing the names of Confederate Generals, who were by definition traitors to their country. And then, there is his refusal to indicate that he will get into negotiations even around the edges about police reform arising from the George Floyd/Black-Lives-Matter Demonstrations. After all, he has stated that 99.9 % of cops are "good cops." Altogether, no dog whistles here.

Trump knows what won for him last time: racism plus Russian interference. And so, this time around it will all come down to racism and what we know the Republicans are already planning, because by both positive actions and lack of action they have told us what it is: massive voter repression/suppression beforehand, interference on election day (those "50,000 poll watchers" looking for nonexistent "voter fraud" who are really voter-intimidators) and then should Trump lose after all that law suit after law suit after law suit.

That's it folks. That's what it has come down to for Trump: racism and voter suppression. If our nation is to be saved from Trumpite fascism (and yes, while some of us were using the term as far back as 2015 and such authorities as Paul Krugman have put the words Trump and fascism in the same column for some time, the term is being applied to him and his movement much more widely now), this has to be recognized very clearly, and a very strong offensive against it, by the Democratic Party and others, has to be prepared and implemented.

For Trump has clearly declared the beginning of the Second Civil War, focused as the first one was, on race and racism, to use as a battering ram in his run for re-election. And so in summary, in just the last week he has told us that since he would be losing on everything else, his primary platform, the one to which he will be absolutely wedded, will have only two planks: racism and "voter fraud," which of course is the stand-in for massive voter suppression and cheating. They know it, and our side has to know it too.

Steven Jonas, MD, MPH, MS is a Professor Emeritus of Preventive Medicine at StonyBrookMedicine (NY) and author/co-author/editor/co-editor of over 35 books. In addition to his position on OpEdNews as a "Trusted Author," he is a Senior Editor, (more...)
Related Topic(s): Depression; Pandemic; Racism; Trump; Trump Against Democracy; Trump Anger; Trump Anxiety; Trump Campaign; Trump Cruelty; Trump Dangerous; (more...) Trump Idiot-in-chief; Trump Presidency; Trump Protesters; Trump Racism; Trump Racist, Add Tags  (less...)
Add to My Group(s)
Go To Commenting
The views expressed herein are the sole responsibility of the author and do not necessarily reflect those of this website or its editors.