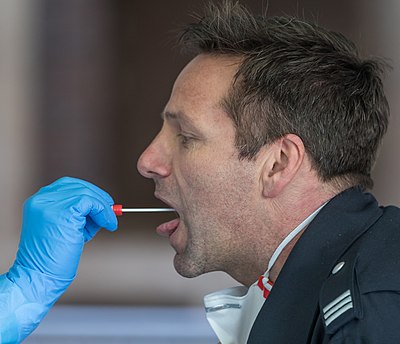 Infektionsschutzzentrum im Rautenstrauch-Joest-Museum. Actually the Germans began wide-spread testing in early February, using a German-developed, easy-to-use-quick-results test. The WHO offered it to Trump. He turned it down, losing about a month on the
(Image by (From Wikimedia) Raimond Spekking, Author: Raimond Spekking)   Details   Source   DMCA

On p. A5 of The New York Times of May 2, 2020, there appears a full-page ad posted by CONCERNEDCITIZENBOBBY.COM (for now simply a website displaying the ad, with no other identifying features). The ad says in part: "After 13 Weeks 98% of Americans Have Not Been Tested. . . We Need a National Testing Program with the Resources and Coordination of the Federal Government. Please Do Your Job, Mr. President." Very impressive. Very correct. But indeed, the President has been "doing his job," as per usual --- for himself. In this case, the "job" is to make sure that there will never be a national testing program, at least for as long as he is in office. Which is what this three-part series has been and is about. And so, we come to the last installment of it.

Let us begin with a review of Trump's "Magic Tricks" which have guided his life and career since childhood (discussed in some detail in the previously referenced column):

2. For decades he has had a standard operating procedure when he faces an adversary of any kind. He learned it from Roy Cohn (who learned it from Joseph McCarthy): "Always attack; Never defend." (Just watch him deal with "Die Luegen Presse" [Hitler-speak] in his daily campaign speeches.)

3. Also learned from Roy Cohn is the mantra: "when you run into a problem, just sue." [On April 29, 2020, Trump actually threatened to sue his own campaign manager, Brad Parscale, because he, Trump, didn't like the negative poll results that Parscale was reporting to him.] You may not win, and it may cost you some money. But a) you might win and b) with the endlessness with which civil litigation can be drawn out in the U.S. legal system, the other side may just get worn out.

4. In the whole of his business life, Trump has never been responsible to anyone else, either above him (except for Dad, of course) or even alongside.

Steven Jonas, MD, MPH, MS is a Professor Emeritus of Preventive Medicine at StonyBrookMedicine (NY) and author/co-author/editor/co-editor of over 35 books. In addition to his position on OpEdNews as a "Trusted Author," he is a Senior Editor, (more...)
Related Topic(s): Blame; Cuomo; Democratic; Magic; National Emergency; Pandemic; Planning; Science; Trump; Trump Anger; (more...) Trump Attacks Democrats; Trump Attacks Media As Enemy Of The People; Trump Blames The Media; Trump Fake News; Trump Madness; Trump Presidency; Truth, Add Tags  (less...)
Add to My Group(s)
Go To Commenting
The views expressed herein are the sole responsibility of the author and do not necessarily reflect those of this website or its editors.