It seems appropriate to publish this column on the second anniversary of the assumption of the Presidency by Donald Trump, a President, it is safe to say, unlike any the U.S. has ever had. Back in the Fall of 2015, as the Presidential primary season was getting into full swing, I wrote a column on him entitled "Hair Trump or Herr Trump." In it, I dealt with the number of fascist tendencies that already seemed to be appearing in Trump's person and politics. (And they were being noted by other observers as well, as noted in that column See here, here, here, here, and here.) As Trump proceeds through his Presidency, I thought that it might be useful, or at least interesting, to go back and take a look at the fascist tendencies he did, and did not, project at the time. And then to see what's is going on now.

In the original, I noted on the similarities that:

1. There's the racism, the xenophobia, and in Trump's case, substituting for Hitler's extreme prejudice against one religious grouping, the Jews, it's another, the Muslims.

2. Trump has the ability to whip up the right audiences into a frenzy. As well, there's the frequent name-calling in re opponents. (And now, in referencing certain opponents like Rep. Adam Schiff, Trump has descended into curse/name-calling.

3. There's the "our nation must be great again" theme, prominently displayed.

4. For Hitler the great national enemy was the Soviet Union. During the campaign, Trump seemed to be openly aiming criticism at Russia. We now we know that for Trump Russia was hardly an adversary, but rather a place to build the then-next Trump Tower (and he did make a radical change in the Repub. Platform on the matter of Ukraine, little remarked upon at the time).

5. Then, as I noted, there were the vague promises of a great future, without telling much about exactly how they planned/plan to get there. There's the ample use of the Big Lie Technique. A characteristic that kept/keeps both men going is that they didn't/don't embarrass. They never had/have to apologize, explain, defend. They were/are the prefect avatars of the Roy Cohn/Lee Atwater consummate principle of politics: "Always attack; never defend." Finally, it is clear that Trump just loves personal power, just like Hitler did. (Actually, at the time no one could have predicted just how much lying Trump would engage in. Hitler [and his Propaganda Minster Josef Goebbels] reserved it for special occasions.)

6. While in 2015 Trump did not have mass following Hitler had, even before the passage of the Enabling Act which made him dictator, now Trump's solid "base" approximates what Hitler had at the time of the last free elections in Germany in 1932: in the 35-40% range.

7. Finally, while in 2015, in comparison with Hitler, Trump did not have a large, well-organized political party behind him, now of course, because of the Rightward Imperative and the primary system, Trump "owns" the Republican Party, at least electorally. Of the Repubs. are shrinking and exactly how well-organized they are no one really knows, but they still are the national right-wing party, and for the most part they are Trump's.

Now as to the differences.

1. Trump does not have a private army. Hitler had the "SA," Die Sturmabteilung, the Storm Troopers/"Brownshirts." (I just learned that they wore the brownshirts because when the thuggish SA gangs were being formed from demobilized soldiers after the end of the First World War, brown military shirts that had been worn by Prussian soldiers in that conflict could be bought really cheaply, as war-surplus.) It was large (up to 3 million mainly part-timers) violent, and active. Trump would likely just love to have something similar, but while there are plenty of armed right-wing "militias" around the country, their level of organization compared with the SA's is something they (and Trump, if he were to be so inclined) can only dream of. 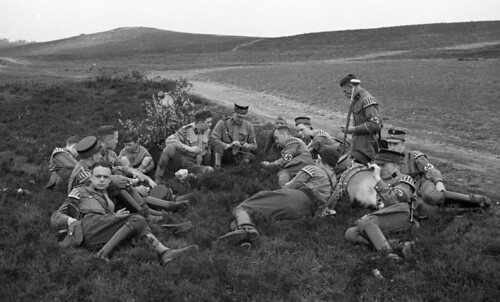 Origins of the SA
(Image by foundin_a_attic)   Details   DMCA

2. Hitler was arguably history's greatest Keynesian political economist, relying not only on heavy military spending to pull Germany out of the Great Depression but on mass infrastructure and social spending (e.g., on strengthening German national health insurance) as well.

3. From close to its beginnings the Nazi Party relied in part on foreign money for its funding. (I have pointed out on a number of occasions that one George Herbert Walker was an early (from 1923) U.S. Nazi funder. In 2015, there was no public knowledge of the foreign connections Trump actually had, and that seemed to be difference between Trump and Hitler. Now our knowledge of the Trump foreign connections, especially to Russia, is growing by leaps and bounds There actually seem to have been foreign campaign contributions through the National Rifle Association but that pales in comparison to the Russian election intervention on Trump's behalf.

5. In the 2015 column I pointed out that in contrast with Hitler, Trump has no firm broad-based belief system when it comes to policy. Even in defined areas like tax cuts for the rich, whether or not he believes the Republican myth that tax cuts for the rich and the large corporations make the economy grow, he has a strong personal interest in the matter, as he does on government regulation. That is, as many observers have noted his style is "transactional," that is focused on the moment on his personal (in terms of either monetary or ego needs) and perceived political needs.

Steven Jonas, MD, MPH, MS is a Professor Emeritus of Preventive Medicine at StonyBrookMedicine (NY) and author/co-author/editor/co-editor of over 35 books. In addition to his position on OpEdNews as a "Trusted Author," he is a Senior Editor, (more...)
Related Topic(s): Fascist; Hitler; Trump And Putin; Trump Attacks Media; Trump Border Wall; Trump Campaign; Trump Con; Trump Crime; Trump Fake News; Trump Foreign Policy; (more...) Trump Illegality; Trump Impeachment; Trump Presidency; Trump Racist; Trump Russia Connection; Trump Travel Ban, Add Tags  (less...)
Add to My Group(s)
Go To Commenting
The views expressed herein are the sole responsibility of the author and do not necessarily reflect those of this website or its editors.