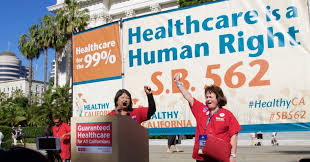 Nothing better illustrates the political bankruptcy of the Democratic Party--for all progressive intents and purposes--than California State Assembly Speaker Anthony Rendon's announcement on Friday afternoon that he was going to put a "hold" on the single-payer health care bill (SB 562) for the state, effectively killing its passage for at least the year.

The Democratic Party finds itself in a bind in California. They hold the governorship and a supermajority in both houses of the legislature, so they can pass any bill they want. SB 562 had passed the Senate 23-14.

There was enormous enthusiasm among California progressive activists, who, with organizations like Campaign for a Healthy California (CHC,) and the National Nurses United (NNU,) and the California Nurses Association (CNA) were working tirelessly, and hopeful of success. After all, Bernie's people were taking over the California party from the bottom since the election. I recall a night of drinking last year with an old friend who has been spearheading that effort, as he rebuffed my skepticism, and insisted that this time there would be a really progressive takeover of the California party, and single-payer would prove it. After all, once enough progressive pressure was been put on the legislators, the bill would be going to super-progressive Democratic Governor, Jerry Brown, who had made advocacy of single-payer a centerpiece of his run for President in 1992, saying: "We treat health care not as a commodity to be played with for profit but rather the right of every American citizen when they're born." Bernie foretold.

Unfortunately, today that Governor is, according to Paul Song, co-chair of the CHC, "doing everything he can to make sure this never gets on his desk." And it won't. Unfortunately, all the Democrats like Rendon, who "claims to be a personal supporter of single-payer," will make sure that their most progressive governor is not put in the embarrassing position of having to reject what he's been ostensibly arguing for for twenty-five years, of demonstrating so blatantly what a fraud his, and his party's, progressive pretensions are.

Thus unfolds the typical Democratic strategy: Make all kinds of progressive noises and cast all kinds of progressive votes, while carefully managing the process so that the legislation the putatively progressives putatively support never gets enacted. They always support the progressive policy personally ; they just have to oppose it politically. Usually, they blame Republican obstructionism, and there certainly is enough of that, and where there is, it provides a convenient way for Democrat legislator to "support" legislation they know will be blocked and wouldn't really enact themselves if they could.

In the California case, the dissembling is obvious. The Republicans can't be blamed. The only thing standing in the way of single-payer in California is the Democratic Party. As it was on the national level in 2009, when Obama and the Democrats could have passed any healthcare bill they wanted, just as they passed the Republican-inspired gift to the for-profit health insurance industry, the ACA--without a single Republican vote. It was true-believing capitalist Democrats like Max Baucus, led by Obama and his sidekick Rahm Emanuel (who called leftists "fucking retarded") who arrested single-payer activists (including doctors) in order to prevent single-payer from even being considered. It was they who strong-armed reluctant Democratic legislators, who had signed an oath not to do so, into passing a bill that leaves28 million Americans without health insurance, and forces the rest into plans whose premiums rise and networks of coverage shrink every year.

In fact, the perfectly reasonable discontent with that plan probably had more to do with helping Trump win than did any actions of bad-old (as opposed to good-new) James Comey. As Marcy Wheeler pointed out, in an analysis that's contested but should certainly not be ignored, Hillary's fatal slide in the polls began before Comey's notorious letter of October 28th, and coincided with the announcement, four days before, of steep Obamacare premium increases. You decide whether you think Anthony Weiner's sexting emails, part three, had more effect on voters than anger over being hit with stiff premium increases (22% average, 25% in 20 states, 60% in some) on increasingly crappy policies: 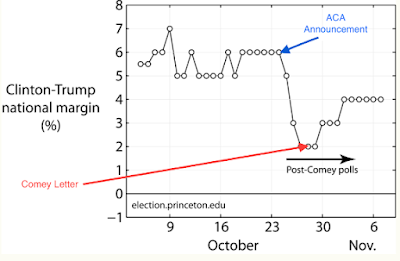 
So the Democrats create the ground for Trump by passing a lousy healthcare law that's sure to piss people off rather quickly, then use the even worse plan that the Republicans come up with to do nothing but trash Trump, while blocking real progressives' attempts to get the only plan that would actually cover all Americans and save money. In Colorado last November, Democratic Governor John Hickenlooper refused to support a single-payer referendum because he "didn't want to disrupt" the "strides [made] under Obamacare." The Democrats' ACA marched the nation straight into the shoals of Trump and the Republicans' ACHA, and now the Democrats are blocking the only plan that solves the problems of both.

As Deborah Burger, Co-President of the California Nurses Association put it, Assembly Speaker Rendon, "Acting in secret in the interests of the profiteering insurance companies late Friday afternoon abandons all those people already threatened by Congress and the Trump administration."

The excuse, of course, from California Democrats and Governor Jerry Brown is that they don't know how they are going to pay for it, especially on the state level. That would be the same Jerry Brown who explained in 1992 exactly how single-payer would cut costs:

You cut out all the private health insurance. You have one single payer either at the national level or through the 50 states. And that one single payer will be the one that negotiates with the doctors, the hospitals, and the other providers. And since you have only one source of income in the whole medical establishment, you can drive down the cost.

Leaving aside the indispensable point that healthcare, like education and clean water, should be considered a non-discretionary expense, one of the main advantages of single-payer is precisely that it's the only plan that can cut costs significantly. Not having single-payer will not mean healthcare will cost less; it will cost more every year, for every person and in the aggregate. It just means the for-profit insurance and pharmaceutical companies won't care. The real problem with single-payer isn't about costs to the people or to the state; it's about profits for those companies.