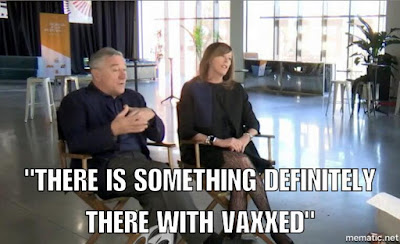 "Ideology, after all, is more influential than laws.".[N]o one"would dream of making legislation to force people to read certain books and prevent them from reading others."[1]

The treatment of the movie Vaxxed: From Cover-Up to Catastrophe is an astounding example of ideological discipline performed by the American cultural elite.

As everybody knows by now, Robert DeNiro selected Vaxxed f or his Tribeca Film Festival. Because he and Grace Hightower have a child with autism, he thought it was important that the issues raised in the film be shown to the public.

Vaxxed presents a personal admission and documentary evidence from Dr. William Thompson, a senior scientist and the lead author of the Center for Disease Control (CDC) study that purported to disprove a link between the MMR vaccine and autism. His evidence indicates that the panel actually found a link--and specifically a 300% increase in risk among African-American boys--and contrived to hide it. The panel's effort to manipulate the data and destroy evidence in order to bury the link extended an inquiry that was meant to take six months into four years.

Thompson says that he, his co-authors, and the CDC, "omitted statistically significant information"; that "my supervisors have broken laws"; that they destroyed evidence in a way he "assumed " was illegal and would violate both FOIA [Freedom of Information Act] and DOJ [Department of Justice] requests"; that he has " stopped lying," and has "great shame now when I meet families of kids with autism because I have been part of the problem".I was complicit, and I went along with this, we did not report significant findings." He also describes the atmosphere that reigned in the CDC thusly: "The federal government is hostile to anyone who says anything negative about any industry. " [2]

That is the crux of the movie. It makes the case that this participant's stunning statement-against-interest evidence of fraud should be seriously investigated. You'll be excused if you had no idea this is what the film is about, or if you thought--i.e., if the media coverage of it led you to believe--it was about something else entirely, about making some "anti-vaccination" argument. There is nothing in the film that is "anti-vaccination." Unless criticizing the side-effects (now acknowledged but once completely ignored) of Lipitor makes one "anti-drug." Believe me, there are some voices out there that reject the efficacy and theory of vaccines in general. Neither Vaxxed nor anybody in it is one of them. In fact, the film explicitly supports vaccination, even as it urges more serious attention to the safety of one specific vaccine. But you'd have to see the movie to know that. (If you want a good idea of what the film is like beyond the trailer, take a look at this segment from Thom Hartmann's show.)