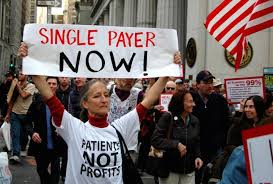 It's great that more than a third of Democratic senators have signed on to co-sponsor Bernie Sanders's Medicare-for-All bill. It's a potentially strong bill that's been welcomed by single-payer activist organizations like Physicians for a National Health Program (PNHP) and National Nurses United (NNU), and it represents a victory for the tireless work of single-payer activists and the popular pressure they stoked. It is also, we must recognize, only possible because of Bernie's insistent promotion of healthcare as a right, in a campaign that widened the field of American political discourse.

Above all, it is a result of continuing disgust with American for-profit health insurance system. It marks the exasperation with Obamacare's half-assed attempt to patch up that system, and the rejection of the even crueler Republican schemes.

At the very least, this bill puts single-payer "on the table" of legislative action and public discussion. The "public discussion" part is perhaps the most important. People will now hear about single-payer, and its advocates will not be completely shut out of media coverage from Fox to PBS, as they are now. Even the Democratic Party will have to talk about it.

But please, please, do not be fooled. It does not mean that most, or any, of those co-sponsoring Democratic senators actually support single-payer. Most of those Democrats have signed on because they felt politically forced to, because they knew they could not face their constituents if they didn't. But many of them do not support single-payer, have no intention of actually working to make it happen, and will, in fact, do their best to undermine and prevent it.

In Homer's Odyssey, both Helen of Troy and King Priam's daughter, Cassandra, tried to warn the king that the elegant Horse, which was presented by the Greeks as an emblem of surrender, was actually an engine of attack that would destroy the city if allowed in. Call me Cassandra.

The New York Times article of September 15th, "Buried Inside Bernie Sanders's Bill: A Fallback Plan," makes the danger clear. Duplicitous, Trojan-horse Democrats like Al Franken and Kirsten Gillibrand are jumping into this bill to hollow it out from within, and divert the tide of single-payer into another disappointing dead-end.