Imprisoned without charges for 14 years in Guanta'namo, Mohamedou Slahi is a symbol of humans' impulse to abuse power and their capacity for redemption. 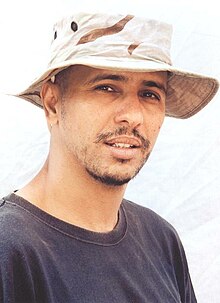 Mohamedou Slahi is an extraordinary person with a harrowing past and a remarkable, still-unfolding story. The interview I conducted with him on Saturday, which can be viewed below, is one I sincerely hope you will watch. He has much to say that the world should hear, and, with a new War on Terror likely to be launched in the U.S., his story is particularly timely now.

Known as the author of the best-selling Guanta'namo Diary a memoir he wrote during his 14 years in captivity in the U.S. prison camp at Guanta'namo he is now the primary character of a new Hollywood feature film about his life, The Mauritanian. The first eight years of Slahi's imprisonment included multiple forms of abuse in four different countries and separation from everything he knew, but it afforded no charges, trials, or opportunities to refute or even learn of the accusations against him.

The film stars Jodie Foster, Benedict Cumberbatch and Shailene Woodley, while Slahi is played by the French-Algerian actor Tahar Rahim. Foster last week won a Golden Globe award for her role as Nancy Hollander, Slahi's lawyer who worked for years, for free, to secure his right simply to have a court evaluate the evidence which the U.S. Government believed justified his due-process-free, indefinite imprisonment. Cumberbatch plays Slahi's military prosecutor whose friend died on 9/11 when the American Airlines passenger jet he was piloting was hijacked and flown into the South Tower of the World Trade Center.

Slahi's story is fascinating unto itself but, with a second War on Terror looming, bears particular relevance now. No matter your views on the post-9/11 War on Terror ranging from "it was necessary to take the gloves off and dispense with all limits in order to win this war against an unprecedented evil and existential threat" to "the U.S. gravely overreacted and mirrored the worst abuses of what it claimed it was fighting" to anything in between it cannot be disputed that limitless power was placed in the hands of the U.S. Government to imprison, to monitor, to surveil, to kidnap and to kill anyone it wanted, anywhere in the world, with no checks. And like most authorities vested in the state in the name of some emergency, these powers were said to be temporary but, almost 20 years later, show no signs of going anywhere. They are now embedded in the woodwork of U.S. political life.

Related Topic(s): Abuse Of Power; Bush; Evidence; Government; Guantánamo; Mohamedou Slahi; Obama; Terror Alert Distractions; Terrorism Islamic; Torture, Add Tags
Add to My Group(s)
Go To Commenting
The views expressed herein are the sole responsibility of the author and do not necessarily reflect those of this website or its editors.