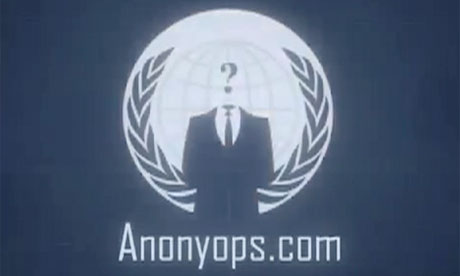 From a video posted by the Anonymous hacking collective urging the US public to stop the Cyber Intelligence Sharing and Protection act (Cispa) in the Senate Photograph: YouTube/TheAnonMessage

Whatever one thinks of WikiLeaks, it is an indisputable fact that the group has never been charged by any government with any crime, let alone convicted of one. Despite that crucial fact, WikiLeaks has been crippled by a staggering array of extra-judicial punishment imposed either directly by the US and allied governments or with their clear acquiescence.

In December 2010, after WikiLeaks began publishing US diplomatic cables, it was hit with cyber-attacks so massive that the group was "forced to change its web address after the company providing its domain name cut off service." After public demands and private pressure from US Senate Homeland Security Chairman Joe Lieberman, Amazon then cut off all hosting services to WikiLeaks. Sophisticated cyber-attacks shortly thereafter forced the group entirely off all US website services when its California-based internet hosting provider, Everydns, terminated service, "saying it did so to prevent its other 500,000 customers of being affected by the intense cyber-attacks targeted at WikiLeaks."

Meanwhile, Chairman Lieberman's public pressure, by design, also led to the destruction of WikiLeaks' ability to collect funds from supporters. Master Card and Visa both announced they would refuse to process payments to the group, as did America's largest financial institution, Bank of America. Paypal not only did the same but froze all funds already in WikiLeaks' accounts (almost two years later, a court in Iceland ruled that a Visa payment processor violated contract law by cutting of those services). On several occasions in both 2011 and 2012, WikiLeaks was prevented from remaining online by cyber-attacks.

Over the past two years, then, this group -- convicted of no crime but engaged in path-breaking journalism that produced more scoops than all other media outlets combined and received numerous journalism awards -- has been effectively prevented from functioning, receiving funds, or even maintaining a presence on US internet servers. While it's unproven what direct role the US government played in these actions, it is unquestionably clear that a top US Senator successfully pressured private corporations to cut off its finances, and more important, neither the US nor its allies have taken any steps to discover and apprehend the perpetrators of the cyber-attacks that repeatedly targeted WikiLeaks, nor did it even investigate those attacks.

Related Topic(s): Internet Cybercrimes; Internet Political Use; Internet Regulation; Internet Shutdown Or Censorship; Wikileaks, Add Tags
Add to My Group(s)
Go To Commenting
The views expressed herein are the sole responsibility of the author and do not necessarily reflect those of this website or its editors.