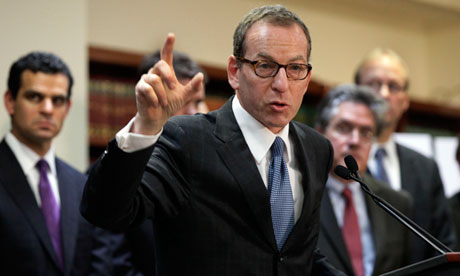 The US is the world's largest prison state, imprisoning more of its citizens than any nation on earth, both in absolute numbers and proportionally. It imprisons people for longer periods of time, more mercilessly, and for more trivial transgressions than any nation in the west. This sprawling penal state has been constructed over decades, by both political parties, and it punishes the poor and racial minorities at overwhelmingly disproportionate rates.

But not everyone is subjected to that system of penal harshness. It all changes radically when the nation's most powerful actors are caught breaking the law. With few exceptions, they are gifted not merely with leniency, but full-scale immunity from criminal punishment. Thus have the most egregious crimes of the last decade been fully shielded from prosecution when committed by those with the greatest political and economic power: the construction of a worldwide torture regime, spying on Americans' communications without the warrants required by criminal law by government agencies and the telecom industry, an aggressive war launched on false pretenses, and massive, systemic financial fraud in the banking and credit industry that triggered the 2008 financial crisis.

This two-tiered justice system was the subject of my last book, "With Liberty and Justice for Some," and what was most striking to me as I traced the recent history of this phenomenon is how explicit it has become. Obviously, those with money and power always enjoyed substantial advantages in the US justice system, but lip service was at least always paid to the core precept of the rule of law: that -- regardless of power, position and prestige -- all stand equal before the blindness of Lady Justice.

It really is the case that this principle is now not only routinely violated, as was always true, but explicitly repudiated, right out in the open. It is commonplace to hear US elites unblinkingly insisting that those who become sufficiently important and influential are -- and should be -- immunized from the system of criminal punishment to which everyone else is subjected.

Related Topic(s): Banking; Financial; Immunity; Justice Denied, Add Tags
Add to My Group(s)
Go To Commenting
The views expressed herein are the sole responsibility of the author and do not necessarily reflect those of this website or its editors.