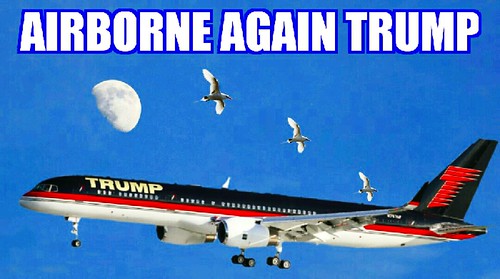 OMG. Once out of the Oval, he is going to have fly in his own plane, that is if he can still afford it.
(Image by IoSonoUnaFotoCamera)   Details   DMCA

Here are some thoughts on the 2020 U.S. elections, not necessarily in order of importance.

1. In my view, Trump cannot win re-election, that is legitimately win by garnering the largest number of votes in the Electoral College. Unless all of the polls are way, and I mean WAY, off, and IF all the votes are counted, Biden will win. BUT Trump could remain as President past 12:01PM, on Jan. 20, 2021, IF all the votes are not counted and the Supreme Court certifies that they do not have to be, as they did in Bush v. Gore, (Florida) 2020. For more on that, see the last item in this list. (Hint. I don't think that that will happen.)

2. Many observers have noted that this is one of the most important elections in U.S. history. Among the contenders are those of 1860, 1864, 1932, and 1940. In my view, this is THE most important election in U.S. history, for two reasons. A) If Trump does remain as President and the Republicans retain the Senate majority, as what I have deemed the "Accidental Fascist" he will install a version of fascism. That of course would bring immense suffering to the U.S. and its people. But beyond that, it would bring a wider tragedy. See 3.

3. Trump himself and many of his closest advisors are Climate Change Deniers. In my view, the worst feature of a Trump 2nd term would be the end of any possibility of controlling the Global Warming that has been over-taking the world for the last 40 years or so (and of course actually began with the beginning of the coal-fired Industrial Revolution in the 18th century). This is because the U.S. would not re-join the "Paris Accords" (which, although not nearly as strong as they could be are at least a step in the right direction) and the governments of other major Global-Warming-Contributors would not feel bound to do anything much about it either. It would mean the World-Wide Triumph of "The Planet-Killer International Fossil Fuel Industry."

4. Trump is not a liar. By definition, a liar is someone who tells a falsehood, knowing it to be a falsehood. When Trump makes a false statement, he does not know it to be false or he just does not think it to be false. Each time, he actually thinks his statements are true. That is how come over time he can make two completely contradictory statements but at the time he is making them regard them each as true. An example of that is the statements about the oncoming pandemic he made to Bob Woodward privately while at the same time he was making statements, in chorus with Sean Hannity, about the "Democrat epidemic-hoax." To repeat, any time he makes a statement about anything that is either factual or "factual" he is absolutely convinced that it is true, or at least a statement of fact as the Trumpites understand facts (which of course are often of the Kelly Ann Conway "alternate facts" type). And so, arguing with True Trumpers about lies and truth is a waste of time.

Steven Jonas, MD, MPH, MS is a Professor Emeritus of Preventive Medicine at StonyBrookMedicine (NY) and author/co-author/editor/co-editor of over 35 books. In addition to his position on OpEdNews as a "Trusted Author," he is a Senior Editor, (more...)
Related Topic(s): Cheating; Fascist; Pardon; Racism; Trump; Trump Against Climate Change; Trump Against Democracy; Trump And Barr; Trump Anxiety; Trump Apologists; (more...) Trump Campaign; Trump Con; Trump Coronavirus Response; Trump Cult; Trump Liar In Chief; Trump Racist; Trump The Fascist, Add Tags  (less...)
Add to My Group(s)
Go To Commenting
The views expressed herein are the sole responsibility of the author and do not necessarily reflect those of this website or its editors.