Republicans almost never run for election on substantive issues (except when they use them for sloganeering, like Trump did in the last election), as in: improving the health care system, really dealing with infrastructure building/rebuilding, dealing positively with global warming, achieving substantive gains in foreign policy, improving the overall standard of living for all U.S., and so on and so forth. That is because for the most part they cannot possibly deliver positives on such issues because their true policies almost always make things worse, not better. Instead they invariably run on process: that is focusing on labels and means to ends without ever substantively specifying the ends, or sloganeering, again without specifying any programs to deal with the issues with which they are supposedly concerned. The only exceptions to this rule are such "anti-" issues as eliminating abortion and gay rights, or the fanciful, xenophobic "build the wall and Mexico will pay for it," on which they are substantively very specific. 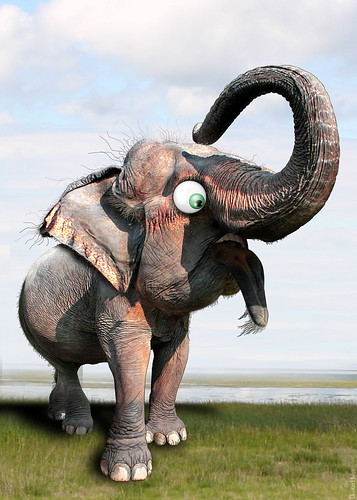 Ever wonder why the elephant is the Repub. symbol? Me too.
(Image by DonkeyHotey)   Details   DMCA

The upcoming Presidential election will be no different. Whether or not Trump is the nominee (and for one reason or another, e.g., see below) is very likely that they will be running (openly and in certain cases covertly) on what I call "The Six R's: Racism, Rage, Red-baiting, Religiosity, Repression, Russian (interference), and The Two C's: Cheating and Conspiracy Theories." Most of this list are pretty straightforward. "Religiosity" here means using religion politically, as in the case of criminalizing certain behaviors on certain religious grounds , and in the case of demonizing certain religions, or non-religions as the case may be, in terms of Islamophobia or broadsides on "secularism" by the (can you believe it?) Attorney General of the United States as the cause of all of the nation's problems. (As a life-long and outspoken secularist I take that one personally). There are likely to be no substantive programmatic offerings, because even those that Trump waved at in 2016 election, like "infrastructure" and "bringing jobs back to America," he and the Trumpublicans© have done nothing but make things worse.

To get an idea of how they are in fact going to approach the election, consider the text of fund-raising email I received from one of their organizations (and yes, I am on several such mailing lists, so that I can keep up with them). This one came from "Trump/Pence: Keep America Great" (10/8/19):

"Steven, Democrats are trying to undo the 2016 Election regardless of FACTS.

They can't accept the fact that the American people chose President Trump, so they've launched an IMPEACHMENT WITCH HUNT to try to take him down. Democrats know that NONE of their SOCIALIST candidates can beat President Trump in 2020. That's why they launched this desperate political stunt.

Trump and his best bud (except Putin, reputed to be the richest man in the world, ain't no communist).
(Image by Marvin Moose)   Details   DMCA

"Nancy Pelosi and Adam Schiff aren't listening to the American people. They're more worried about pandering to their liberal mega-donors and the unhinged left-wing MOB.
They're relying on the same FAKE POLLS that said we were going to lose in 2016 to justify their crazy stance on impeachment. That's why we want to hear directly from YOU."

Right in these couple of short paragraphs are examples of Rage --- what the Democrats are doing to the poor, benighted President, a victim donchaknow --- and Red-baiting. And by the way, they will red-bait any Democratic candidate, from Elizabeth Warren to Joe Biden, regardless of whether or not, like Sen. Warren does, they openly declare they are a "capitalist" or not. Racism was of course at the center of the Trump campaign in 2016, and there is no reason to believe that this time around, especially if he is the candidate, things will be any different. It is not a coincidence, that the man is still running against President Barack Obama, even though he was not the Democratic candidate in 2016 and he is barred by the Constitution from running again. (Of course, the chances that Trump has ever read the Constitution are slim indeed --- and if he ever started to do so the chances are even slimmer that he got all the way to the Amendments.)

As for religiosity, the Barr speech blaming everything that is wrong with country on the "secularists" is a clear indication of the role that it will play, as is his track-record in appointing the Supreme Court "Justices" who believe in religious authoritarianism when it comes to such matters as abortion rights. (It happens that Barr is likely a member of the far-right, semi-secret Catholic organization Opus Dei, of which Antonin Scalia was likely a member and Clarence Thomas likely is.) "Repression of the vote?" Well that has been going on since the American Legislative Exchange Council took aim at the state legislatures in 2007. On one particular point, voter photo ID's (actually a good idea in the abstract), the Repubs. revealed their true aims in that regard, when over-and-over again they have made it harder to obtain such a document, rather than easier.

As for Russian interference, Mitch McConnell is doing his damnedest to make sure that there will be no federal funds made available for fighting such an initiative. Why? First and foremost because he knows that without it Trump and the Trumpublicans© stand absolutely no chance of winning and Trump would be dragging down many Repubs. with him. Then, of course they will cheat , as in the last Georgia gubernatorial election in which the Repub. Candidate for Governor just happened to be the Secretary of State, who did everything he could to cut down on the black vote (and still won only by the tiniest of margins).

As for conspiracy theories, just watch Hannity for a night or two.

And finally, the third "C," the old reliable (no, not Tommy Heinrich) for the Repub./Trump propaganda machine, the Clintons. HRC has just added to the Clinton mess with the charges she has hurled against Tulsi Gabbard and Jill Stein (click here). But even without this latest side-show, the Trumpublicans(C) will use them, now and again, as if they each were each the Democratic candidate in 2020.

Of course, there are two ways that Trump could lose, whatever the real vote might be. One is the health issues which put a 74 year-old man (which he will be on Election Day, 2020) who appears to be overweight, who apparently eats what can be called an unbalanced diet, who apparently gets no exercise, and who responds with rage at the slightest challenge, at risk of a variety of physical and mental ailments. The other would be if his hair-piece would fall off in public. And that rig can only be a hair-piece, at least in part. Since image is so important to Trump and his followers (a much better word for Trump voters than "base"), that happening would probably do more to sink his standing further even than any further scandals.

And we will leave it there.

Steven Jonas, MD, MPH, MS is a Professor Emeritus of Preventive Medicine at StonyBrookMedicine (NY) and author/co-author/editor/co-editor of over 35 books. In addition to his position on OpEdNews as a "Trusted Author," he is a Senior Editor, (more...)
Related Topic(s): Abortion; Catholic; Cheating; Conspiracy; Demonizing; Election; Impeachment; Islamophobia; Racism; Rage; (more...) Religion; Repression; Republican; Rights; Secularism; Trump; William Barr, Add Tags  (less...)
Add to My Group(s)
Go To Commenting
The views expressed herein are the sole responsibility of the author and do not necessarily reflect those of this website or its editors.