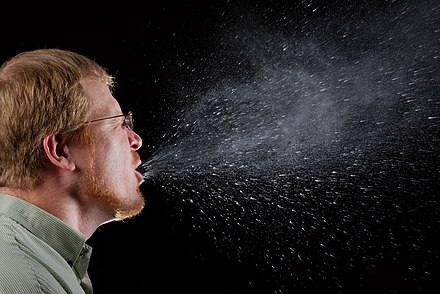 Why everyone should be wearing one (a mask, that is).
(Image by (From Wikimedia) James Gathany, Author: James Gathany)   Details   Source   DMCA

"Trump and His 'Warriors' "

In his visit to a mask-making facility in Arizona on May 5, at which he did not wear a mask despite signs saying that they were required, Five/Bone-spur/Deferments Trump --- never a warrior himself --- famously said:

"I'm viewing our great citizens of this country, to a certain extent, and to a large extent, as warriors. They're warriors," Mr. Trump told reporters, adding: "We can't keep our country closed. We have to open our country."

So, Trump viewed the U.S. people as [his] soldiers to be "sent into battle" against COVID-19. And obviously, with --- as of this writing --- the Tulsa rally, being commonly called a "super-spreader" still being on, he still regards them --- at least those who still count themselves as his followers --- as such. Of course not among his "warriors" are the hundreds of Tulsa-area health professionals who have signed a letter to the Tulsa Mayor pleading with him to (somehow) prevent the event from taking place. The letter notes that health professionals from around the state, hardly a hotbed of liberalism especially in its medical sector, have joined in so urging. Nevertheless, cancellation is not likely in the forecast. One can imagine what ego-gratification-starved Trump's reaction to that would be.

One hardly knows where to start on this one. First of all, as I have shown in my three previous columns on Trump's "Magical Thinking," having not the foggiest idea of what a virus is, what the illness is that this one causes, and how it spreads (from person-to-person through the air). Nor does he have the foggiest understanding of how its spread can be controlled. Since that happens through the air, mask-wearing and social distancing, not really complicated concepts, have worked well in many other advanced capitalist countries in diminishing the spread and resulting infection. Trump does not seem to be able to comprehend those facts. (And if he had done early on, he would have been the hero of pandemic control and on a glide-path to re-election.)

Further, as is now well-known ---mass testing/contact-tracing/isolation, can bring down the spread as well. Trump cannot seem to comprehend that either. Of course, since, as John Bolton has told us, Trump thought that Finland was part of Russia (it isn't, even though over the centuries many a Russian ruler would have liked it to have been) and didn't know that the UK has nuclear weapons, one should not be too surprised at his failure to know the basic facts about a straightforward infectious disease.

Trump is a man who has had a lifetime of many enemies --- some real, some imagined. But they have all been human. Of course, this enemy isn't human. But it is quite obvious that --- based on his failure to adopt the relatively simple measures that in many other countries have been used to control the spread of this very easily transmissible disease --- Trump --- this ignorant, poorly educated, and not very bright man --- simply doesn't understand that. He has obviously anthropomorphized COVID-19. And thus, U.S. citizens --- not the nation's top-drawer medical and public health sectors (the latter being top-drawer when properly funded and staffed, which is not the case now) --- can "go into battle against it." And somehow, they can "win," which for Trump means "opening up the country." Which of course, if it is done too soon, as it has been in an increasing number of Republican-led states, leads directly to more spread, more cases and more deaths.

So, Trump simply does not, and cannot, understand how the simple act of wearing a mask could vastly reduce the case- and death-rates in the U.S. He thinks doing so would make him "look funny," instead of making him look like someone who understands the disease and takes his Presidential responsibilities for leading the nation seriously. (Pence of course does understand. His failure to wear a mask, most likely because he wants to do everything he can to prevent --- not the spread of the disease --- but his replacement on the ticket by Nikki Haley, can be seen as criminal. And yes, this is the Mike Pence who, as the Chair of the COVID-19 Task Force of all people told us in April, that things would have died down by Memorial Day.) And so, with his anthropomorphizing, Trump goes onward "into battle."

Second of all, in this mythical "battle" he is ready to send who knows how many U.S. involuntarily to their deaths. (This from a man who skipped the draft for the War on Viet Nam.)

Third of all, since the virus is a virus not a person, losing people on your side to death does not mean that the population of viruses is in any way diminished. Thus, he has absolutely no understanding that victory over the virus is not to be won by more people getting sick and dying but by fewer people doing so.

Fourth of all, he has no understanding that the only way that victory can be won, without either an effective, safe, treatment or an effective, safe, vaccine, neither of which, despite the Trumpites' most wishful thinking, appears to be on the horizon right now, is by adhering to that set of policies set forth in the Administration's own re-opening guidelines. Of course, the Trumpites are for the most part ignoring them.

Fifth of all, and truly the most outrageous, why does Trump "want the economy to come back" regardless of how many people die in the process? Because, as he indirectly and his minions directly have let us know, he thinks that that is his only pathway to re-election (other than wide-spread cheating of many types and the promotion of racism, which of course the Trumpublicans© are going to be implementing on a grand scale).

He does not distinguish between this battle and a conventional war in which one's armies are facing opposing armies, both of which are comprised of people. Trump just doesn't understand that his "warriors," who he is ready to send to their deaths, will be dying alright; but there will be no "troops" dying on the other side. Again, this is magical thinking. Let me say, that I am hardly the only one to use the term to describe what goes one in Trump's brain. One hears it more-and-more from a variety of sources. Consider this in the lead story in the New York Times of May 6, 2020: "Any notion that the coronavirus threat is fading away appears to be magical thinking, at odds with what the latest numbers show."

And indeed, what has happened? Under Trumpublican© pressure, more states "opened up." And now, predictably, new disease-deaths spikes are appearing in them. But these numbers appear to be having little, if any, impact on Trump. He has his "warriors." And they are fighting the "enemy" (which, of course, includes the Democrats, the "Democrat" Governors, the Chinese, and Die Luegen Presse, for openers).

Trump tells us that there have been a million requests for tickets to the Tulsa rally. That is quite an army. Fortunately for Trump's Warriors the BOK Center can hold only about 20,000 people. One can look ahead only with sadness in contemplating how many of then will totally unnecessarily get infected, how many will get sick and perhaps die, how many family members and friends of theirs will be affected, on so on and so forth. But of course, for Trump, there is nothing to worry about. After all, there are all those signed liability-waivers to protect him, not his being so much, but rather what is at least equally important to him --- his wallet.

Note: Some of the text of this column is drawn from a previously published one: "Nikki Haley, Trump, Let the Govs. do It, and the Constitution, Part 2," URL: click here

Steven Jonas, MD, MPH, MS is a Professor Emeritus of Preventive Medicine at StonyBrookMedicine (NY) and author/co-author/editor/co-editor of over 35 books. In addition to his position on OpEdNews as a "Trusted Author," he is a Senior Editor, (more...)
Related Topic(s): Donald Trump Supporters; Illness; Pandemic; Trump; Trump And Bolton; Trump Attacks Media As Enemy Of The People; Trump Draft Dodger; Trump Liar; Trump Moron; Trump Racist; (more...) Trump Rally; Tulsa Oklahoma; Tulsa Rally, Add Tags  (less...)
Add to My Group(s)
Go To Commenting
The views expressed herein are the sole responsibility of the author and do not necessarily reflect those of this website or its editors.