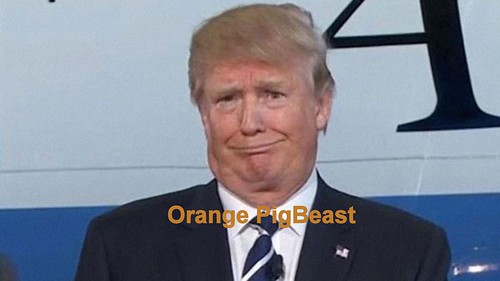 What? Fascist? Who, me? I don't even know what the word means.
(Image by Eleventh Earl)   Details   DMCA

Donald Trump has clearly become a fascist ---during his occupation of the Office of the President. He has always been a racist, but fascism, as a system of government, is something new to him. He has come across it, accidentally, since he became President, through the merger of the office of the Presidency and his personality.

As a system of government, fascism may be defined as:

"Under fascism, there is a single, all powerful executive branch of government exerting all the elements of State Power, in service of a capitalist ruling class that controls for the most part the basic economic functions of production, distribution, finance, and exchange that keep the society going. In the structure of the government there is no separation of governmental powers. Thus, there are no de facto independent judicial or legislative branches of government, at any level. There is no independent media. There is a single national ideology, based on some combination of racism, misogyny, religious bigotry, authoritarianism, ultra-nationalism, homophobia, and xenophobia. There is a state propaganda machine using the big and little lie techniques. There may be a full-blown dictatorship, a charismatic leader, engagement in foreign wars, and the use of the mob/private armies/the police/various intelligence services/and when necessary the military to enforce the State control of the ruler, the ruling Party, and the ruling class."

All-powerful governments have existed since the invention of monarchies and their equivalent in the mists of the past. But fascism is a creature of the 20th century, that is a unitary government with the powers as defined above, controlling State Power in the interests of a capitalist ruling class, that is not an all-powerful monarchy (see Louis XIV of France, "L'etat c'est moi"). In fact, while there have been many military dictatorships, there have only been four fully formed capitalist/industrial states that can be given the label "fascist:" Hungary under Miklos Horthy, 1919-1944, Italy under Benito Mussolini, 1922-1945, Germany under Adolf Hitler, 1933-1945, and Spain under Francisco Franco, 1939-1975. (Some would consider Japan, 1931-45 to qualify as well, but it never had an unchallenged single leader.)

There were several different paths to power for each of the above dictators. Horthy and Mussolini were appointed as chiefs of state, with all powers, by a monarch. Hitler actually became dictator through, at least at the beginning, the democratic process as it existed in the German Weimar Republic. Franco came to power as the result of a civil war in which he was strongly backed by the German and Italian fascists and the Spanish Catholic Church. Victorious in that war, he overthrew a republican government. In each of these cases, the rulers who established a fascist state as described above had a pretty good idea of what they wanted to accomplish on their way to power, and certainly did after they got it. And each, certainly once they had taken power, had the full support of their respective ruling classes.

Trump is different, which is why I have termed him the "Accidental Fascist." Trump has always run his companies in a dictatorial manner. But other than for his racism, he was a Democrat, or at least supported Democrats like the Clintons, and certain Democratic-supported causes, like freedom of choice in the outcome of pregnancy. Picking the Republican Party as a much more likely road for him to get to the Presidency (which he apparently thought might be fun to do as a new challenge), rather than the Party he had always supported, he came to the Presidency as a result of a variety of political factors. Among them were: multiple Republican primary challengers who could never get behind a single opponent to him for the nomination; very active intervention in the Presidential election on his behalf by "The Russians;" a weak Democratic Party candidate; and an FBI Director who had been an enemy of that candidate for a couple of decades. Thus, Trump became President.

But except for his racism and his xenophobia, he did not at the beginning have a fascist agenda, again in the sense of fascism as it is defined above, to create and then take over as dictator a unitary state apparatus. But because of his personality --- plus his remarkable lack of knowledge about how the U.S. government has traditionally functioned --- plus the unwavering support of the Congressional and State Republican Parties on behalf of the very well-known central elements of his "agenda" which was actually firmly set only after Steve Bannon came over to his campaign from that of the most Right-wing Republican, Ted Cruz. That was the "Big Three" of cutting taxes for the wealthy and the large corporations, the Bannonite "deconstruction of the Administrative State," and the delivery of the Federal judiciary into the hands of Right-wing Republicanism. But for Trump himself, it was/is the use of the Six Magic Tricks that have guided him through life since he was a young adult. It is through their repeated usage that he has inexorably moved in the direction of establishing a fascist government, according to the definition above, in the United States.

That is, not because he has any particular theory of authoritarian government, but because: a) he has an authoritarian personality; b) is driven by his narcissism and sociopathy; c) has had this perpetual internal struggle with his perpetual pattern of losing in business as well as his popular vote loss in the 2016 election, which he knows very well; d) he has to continually meet his life-long feelings of inadequacy stemming from his relationship with is father (as Mary Trump tells us); e) he has gotten away with so much bad behavior over the course of his life so why shouldn't he be able to continue to do so. Thus he readily came to the concept of the "unitary executive,"centered on the Presidency, a la Bill Barr (click here), with potentially some very scary outcomes. For as long as the Republicans control at least one House of the Congress there is not any effective governmental obstacle to his mode of governing (if one can call it that); and finally, while in the current election campaign it has been clearly shown that major elements of the ruling class would like him to be gone, the far-Right "Koch-brothers" wing definitely wants him to stay right where he is.

But given U.S. constitutional government underlain by the Madisonian principle of the Separation of Powers, how could this be? Well, the U.S. Constitution is a fascinating document. It does lay down many rules for governance in writing. But much of what we refer to as "Constitutional Government," since the founding of the Republic has also been covered/created by "norms," that is "accepted practices" that, for example, Presidents are expected to follow. Those would include, for example, responding fully to Congressional inquiries under their "oversight" powers, fully divesting oneself of any ownership and/or control of one's properties, and, on a more mundane level, not using Air Force One for campaign trips. Trump has stormed right over these barricades and many, many others. And since virtually no one in his own Party has chosen to oppose him in any perceptible way, there is no reason to think that he would behave any differently in a second term.

And he may very well be able to get to it, not by actually winning, but as is well-known, by cheating. Presently, he is behind in all the key polls. But Trump has been a cheat all of his life, he has a Party behind him that will engage in what can be called "legal cheating," like the "one collection-point-per-county" for paper ballots in Texas (which sort of thing is already being backed up by the thoroughly politicized Republican Supreme Court), and of course he is already yelling and screaming about an election being "rigged" against him. So he could get a second term, even without "winning" on paper.

And then watch out. Again, driven by Trump's personality, not by any theory of government that is his, the U.S. will be firmly on the Fascist Road. He actually barely knows what government is beyond the tip of his Sharpie and certainly has no understanding of the Constitution except for Article II, Section 2 the way he (and Steve Miller and Bill Barr [although he will be gone soon enough --- not quite slavish-enough-to-Trump] and Steve Bannon) reads it, this nation will be off for the fascist races.

Steven Jonas, MD, MPH, MS is a Professor Emeritus of Preventive Medicine at StonyBrookMedicine (NY) and author/co-author/editor/co-editor of over 35 books. In addition to his position on OpEdNews as a "Trusted Author," he is a Senior Editor, (more...)
Related Topic(s): Class; Democracy; Fascism; Fascist; Father; Government; Hitler; Loser; Monarchy; Mussolini; (more...) Presidency; Racism; Trump, Add Tags  (less...)
Add to My Group(s)
Go To Commenting
The views expressed herein are the sole responsibility of the author and do not necessarily reflect those of this website or its editors.