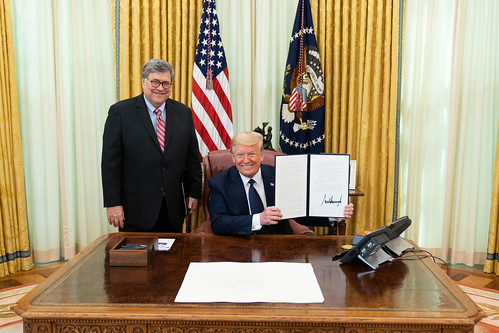 President Trump Signs an Executive Order on Preventing Online Censorship (of QAnon, and US/Nazi propaganda). Oh are they happy!
(Image by The White House)   Details   DMCA

I have written on this subject on a number of occasions. Trump, as his niece and numbers of others have told us, is not very bright, is poorly educated, very limited emotionally, and very mean and nasty. As I said myself in a column back in 2018:

"Trump has a particular way of acting, very well known to everyone, that all started in the way he was brought up, particularly by his father (and I am not about to say here anything that any objective observer doesn't already know). He is a bully. He is poorly educated and doesn't care that he is. He is highly opinionated, without too much dependence on fact for his opinions. He is a racist from his youth. He is a faker/liar from the beginning; e.g., indeed he went to the Wharton School (likely with a paid-for entry-form) but there is no evidence (to my knowledge) that he received its graduate degree. And so on and so forth."

(Actually, as it turned out, he apparently had his SAT's taken him for him by a hired hand, and he only attended a couple of Wharton classes while at Penn.)

But as history's greatest con man he has made it all the way to the U.S. Presidency. And so, how did he do it? As detailed in the columns referenced just above, I came to the conclusion that he did it with what I called his remarkable "Box of Magic Tricks," developed over the course of his younger life. There are six of them:

2. For decades he has had a standard operating procedure to use when he faces an adversary of any kind. He learned it from Roy Cohn (who learned it from Joseph McCarthy): "Always attack; Never defend." (For example, just watch him deal with "Die Luegen Presse" [Hitler-speak] in his daily campaign speeches.)

3. Also learned from Roy Cohn is the mantra: "when you run into a problem, just sue." [One example? Last April 29, 2020, Trump actually threatened to sue his own campaign manager, Brad Parscale, because he, Trump, didn't like the negative poll results that Parscale was reporting to him.] You may not win, and it may cost you some money. But a) you might win, and b) with the endlessness with which civil litigation can be drawn out in the U.S. legal system, the other side may just get worn out.

4. In the whole of his business life, Trump has never been responsible to anyone else, either above him (except for Dad, of course) or even alongside.

5. Trump has lived his life surrounded by enemies (real or imagined --- if he doesn't have them in reality, he makes them up), whether in business, in his personal life, in his banking and financial life, certainly in politics, and not just at this time. In dealing with them, his supposed "Art of the Deal" has never been about deal-making, but always about attempted opponent-crushing. Negotiation in the usual sense of the term is just not his thing.

6. Finally, Trump is history's greatest con man (as noted above).

It is well-known that when the COVID-19 pandemic (which I call the "Trumpidemic2020©") first appeared, Trump first down-played it, then claimed that he had prevented its entry into the U.S. from China by a travel-ban (which proved to be sieve-like), then claimed it would magically disappear --- over an ongoing series of differing deadlines --- and so on and so forth. But back in February when with Hannity etc. he was claiming that talk of an impending epidemic was all a combo "Democratic/'Fake News' " plot to deny him re-election, it turns out, as recorded on the "Woodward tapes," that privately he knew, or seemed to know, the true nature of the impending calamity.

Actually, at the same time he and Hannity were pooh-pooing the whole thing publicly, he and certain aides were telling certain financiers about the true nature of what was coming. A common reaction among them was apparently "sell short." (One wonders if Hannity --- and perhaps others at Fox"News", like its owner ---knew of this.)

Steven Jonas, MD, MPH, MS is a Professor Emeritus of Preventive Medicine at StonyBrookMedicine (NY) and author/co-author/editor/co-editor of over 35 books. In addition to his position on OpEdNews as a "Trusted Author," he is a Senior Editor, (more...)
Related Topic(s): Chaos; Cows; Health; Health; Magic; Obama; Trump; Trump Against Democracy; Trump And Barr; Trump Anxiety; (more...) Trump Attacks Democrats; Trump Attacks Obama; Trump Campaign; Trump Coronavirus Response; Trump Dangerous; Trump Fake News; Trump The Fascist, Add Tags  (less...)
Add to My Group(s)
Go To Commenting
The views expressed herein are the sole responsibility of the author and do not necessarily reflect those of this website or its editors.