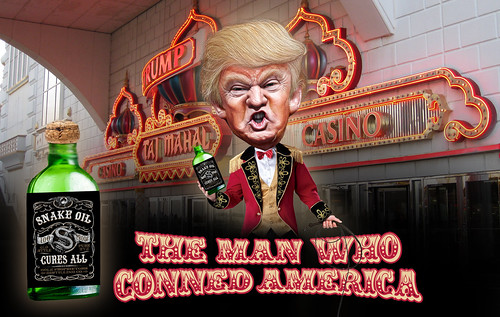 And so, the Republican National Convention is over, and in a number of the important senses of the term, the Trumpublicans© have gone full fascist. What do I mean by that, you might ask? After all, I have been using the term "Trumpublican©" for the last couple of years, often in a sort of jocular way. But now it can be used in all seriousness, as I pointed out in my OpEdNews column of last week , "Der Fuerherprinzip, the Republican Party, and Leader Trump." As I said in that column:

"The major defining construct, politically, for any party is the Platform that is revealed every four years at the Presidential Convention: 'This is What We Stand For.' . . . Any Party's Platform's countless details are hammered out over countless hours by representatives of the various factions of the Party. . . . It's the Common Ground for the members. But for the Republican Party, 2020, that is no longer the case. Very publicly the Party announced that there would be no platform this year. No political party has ever done that. . . . [B]ut it does have an Agenda [which] did not appear as any kind of Republican Party document. It was sent out in a Trump- Pence fundraiser on August 24, 2020, with no mention of the Republican Party, under the headline: 'BREAKING: PRESIDENT TRUMP ANNOUNCES SECOND-TERM AGENDA.' "

The Leader has set the Agenda for the Party. The Leader, indeed, has taken over the Party. As I said in the title of that column, above, "Der Fuerher Prinzip," The Leadership Principle --- through which Adolf Hitler unilaterally ruled first the Nazi Party and then the German nation, which characterized every fascist nation of the 20th century with the exception of the Empire of Japan --- has overtaken the Republican Party. As in the following definition of "fascism" which I have been using for some time now (and I should note that many users of the term do not define it, but I am a stickler for definitions):

"Under fascism, there is a single, all powerful executive branch of government, in service of a capitalist ruling class that controls for the most part the functions of production, distribution, finance, and exchange. In the structure of the government there is no separation of powers. Thus, there are no de facto independent judicial or legislative branches of government, at any level. There is no independent media. There is a single national ideology, based on some combination of racism, misogyny, religious bigotry, authoritarianism, ultra-nationalism, homophobia, and xenophobia. There is a state propaganda machine using the big and little lie techniques. There may be a full-blown dictatorship, a charismatic leader, engagement in foreign wars, and the use of the mob/private armies/the police/various intelligence services/and when necessary the military to enforce the control of the ruler, the ruling Party, and the ruling class."

As many of you know, I have been writing on Trump and fascism for quite some time, and before that I was writing on Trump and racism, which is often a fascist precursor. I recently re-published a series of those columns on BuzzFlash.com. Some of those were first published on OpEdNews, while others were first published elsewhere. I am assembling the list, with their links, here.

First was an Introduction to the series: "Donald J. Trump: On the Road from Racism to Fascism, 2011-2020." Second came "Race is the Trump Card" originally published in 2011. It begins with a brief history of the Doctrine of White Supremacy which has infected this nation since that doctrine was first developed in the 17th century set of English colonies to justify the property-ownership of human beings of African origin, a system otherwise known as "slavery." The column then goes on to show how in his Presidential-run-try-out year, Donald Trump tested and developed the theme of "birtherism" as a metaphor for the racism that a) is in his soul from childhood and b) would form the issue-foundation for that eventual run.

Third in the series is "Hair Trump or Herr Trump?" This column was originally published on October 2, 2015, as Trump was becoming a serious (in the political sense) candidate for the Republican nomination. First, the similarities were highlighted: the racism, the xenophobia, and in Trump's case, substituting for Hitler's extreme prejudice against one religious grouping, the Jews, it's another, the Muslims. There was the speaking style (although Hitler's was apparently well-practiced, while Trump's apparently isn't), and with it the ability to whip up the right audiences into a frenzy. There was the frequent name-calling in re opponents. And there was the constant theme "our nation must be great again." As for the differences, for example Trump had no mass party at that time, he had no independent, large armed force, (Hitler had the private Sturmabteilung, the SA, the "Brown Shirts" [which of course could well come into existence in a 2nd Trump Administration]), and at that time seemed to have no firm belief system (although now his thoroughly imbedded ideological racism is becoming more apparent by the day). Also, he did not yet have major funding from any sector of the ruling class, which Hitler had from the beginning.

Fourth in the series came "Donald Trump: Turning the Corner Towards Fascism (But First Let's Define It)" (originally published on June 21, 2016). In that column, written as Trump was closing on in the Republican nomination, I considered several definitions of the term (of course including mine). I also noted that "Since I wrote my book on the future rise of fascism in the United States, The 15% Solution: How the Republican Religious Right Took Control of the U.S., 1981-2022 (originally published in 1996 under a slightly different title, The 15% Solution: A Political History of American Fascism, 2002-2022), I have always been careful to carefully define the term. In fact, in my book, there is a 10-page Appendix (II) devoted to the subject." I concluded that Trump was closing in on justifiably being defined as a fascist (by definition).

Fifth in the series was "Trumpite Fascism: How the Nation Could Get There and a Brief Glimpse of What Would Be Waiting for It" (originally published on June 4, 2019). This column (very) briefly reviewed the political history of how Hitler came to power, in part because the progressive forces in Germany did not unite together to oppose the eventuality. It then went on to describe some of the major outcomes of a projected Trump/fascist second term: the full takeover of the Supreme Court, the illegalization of abortion rights, the crushing of the independent media, the gradual elimination of any kind of support for the payment for health services, the continued crushing what is left the trade union movement, the continued destruction of public education, and so on and so forth.

Sixth and last in the series was further on the topic, "What Might a Second Trump Term Look Like? It Will Not be Fun, Folks" (published on October 12, 2019). This one continued on, in some more detail, from the fifth, above. And of course, to this list can now be added my column from last week on OpEdNews referred to at the beginning of this column, "Der Fuerherprinzip, the Republican Party, and Leader Trump." And added to that can be the characterization of how Trump is dealing with the increasing demands for racial justice while at the same time dealing with his policy, if one can call it that, for dealing with what I call the Trumpidemic2020© which is only making the economic crisis created by those policies even worse. And further added to that are his plans for attempting to steal the election, beginning of course with the severe damage he and his "Postmaster General" (major Trump contributor) are causing to the U.S. Postal Service.

Certainly, an increasing number of authorities are warning of Trumpite fascism, or "authoritarianism" or "autocracy" or dictatorship. A current column on OpEdNews by Jeff Cohen does precisely that. This series, (in my view at any rate, since they are my articles after all) demonstrates Trump's inexorable movement in this direction to the point where he and he alone (remember "I alone can fix it" from the 2016 campaign?) is running, not as the candidate of his Party but as "The Man Himself."

Let me conclude that numbers of my friends on the Left who are supporting third-party candidates call me a "fear-monger." To that charge I plead "yes," absolutely. Along with an increasing number of other observers, including many prominent leaders of the Left in this country, I want to monger as much fear about Trump and what a second Trump term as President would look like as I possibly can. And urge one-and-all to vote for Biden-Harris. If they make it, we can then begin campaigning for all the reforms and new programs that we would all like to see.

Steven Jonas, MD, MPH, MS is a Professor Emeritus of Preventive Medicine at StonyBrookMedicine (NY) and author/co-author/editor/co-editor of over 35 books. In addition to his position on OpEdNews as a "Trusted Author," he is a Senior Editor, (more...)
Related Topic(s): Fascism; Hitler; OpEdNews; Republican; Trump; Trump Against Democracy; Trump Attack On Postal Service; Trump Attacks Joe Biden; Trump Campaign; Trump Liar In Chief; (more...) Trump Presidency; Trump Racism; Trump Racist; Trumpism, Add Tags  (less...)
Add to My Group(s)
Go To Commenting
The views expressed herein are the sole responsibility of the author and do not necessarily reflect those of this website or its editors.