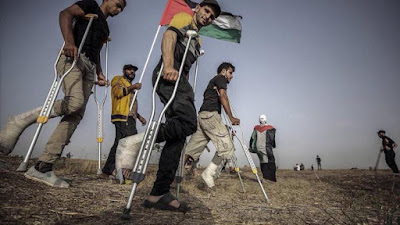 The Great March of Return is a startling, powerful expression of Palestinian identity and resistance. Thousands of Palestinians have come out, bravely and unapologetically, to say: "We refuse to remain invisible. We reject any attempt to assign us to the discard pile of history. We will exercise our fundamental right to go home." They have done this unarmed, in the face of Israel's use of deadly armed force against targets (children, press, medics) deliberately chosen to demonstrate the Jewish state's unapologetic determination to force them back into submissive exile by any means necessary. By doing this repeatedly over the last few weeks, these incredibly brave men, women, and children have done more than decades of essays and books to strip the aura of virtue from Zionism that's befogged Western liberals' eyes for 70 years.

What the Israelis have done over the past few weeks--killing at least 112 and wounding over 13,000 people (332 with life-threatening injuries and 27 requiring amputation)--is a historical crime that stands alongside the Sharpeville Massacre (69 killed), Bloody Sunday (14 killed), and the Birmingham Fire Hoses and Police-Dog Repression as a defining moment in an ongoing struggle for justice and freedom. Like those events, this month's slaughter may become a turning point for what John Pilger correctly calls "the longest occupation and resistance in modern times"--the continuing, unfinished subjugation of the Palestinian people, which, like apartheid and Jim Crow, requires constant armed repression and at least occasional episodes of extermination.

The American government, political parties, and media, which support and make possible this crime, are disgraceful, criminal accomplices. American politicians, media, and people, who feel all aglow about professing their back-in-the-day support (actual, for some; retrospectively-imagined, for most) of the Civil-Rights movement in the American South and the anti-apartheid struggle in South Africa but continue to ignore the Palestinian struggle for justice against Zionism, because saying peep one about it might cost them some discomfort, are disgraceful, cowardly hypocrites.

You know, the millions of ant-racist #Resistors who are waiting for a quorum of Natalie Portmans and cool elite, preferably Jewish, personalities to make criticism of Israel acceptable before finding the courage to express the solidarity with the Palestinian people they've always had in their hearts. Back in the day, they'd be waiting for Elvis to denounce Jim Crow before deciding that it's the right time to side with MLK, Malcolm, and Fred Hampton against Bull Connor, George Wallace, and William F. Buckley.

The bankruptcy of purportedly anti-racist and humanitarian liberal-Zionist ideology and ideological institutions reached an apogee with the eruption of various apologia for Israel in the wake of this crime, not-so-subtly embedded in mealy-mouthed "regret the tragic loss of life" bleats across the mediascape. All the usual rhetorical subjects were rounded up and thrown into ideological battle: "Israel has every right to defend its borders" (NYT Editorial Board); the "misogynists and homophobes of Hamas" orchestrated the whole thing (Bret Stephens); the protestors are either Hamas "terrorists" or Hamas-manipulated robots, to be considered "nominal civilians" (WaPo). And, of course, the recurring pièce de re'sistance: Human Shields!

Somewhere in his or her discourse, virtually every American pundit is dutifully echoing the Israeli talking point laid down by Benjamin Netanyahu during the Israeli attack on Gaza in 2014: that Hamas uses the "telegenically dead" to further "their cause." The whole March of Return action is "reckless endangerment, bottomlessly cynical" (Stephens). Women and children were "dispatched" to "lead the charges" although they had been "amply forewarned"of the mortal risk." It's a "politics of human sacrifice" (Jonathan S. Tobin and Tom Friedman), staged by Hamas, "the terrorist group that controls [Gazans'] lives," to "get people killed on camera." (Matt Friedman, NYT Op-Ed). The White House, via spokesman, Raj Shah, adopts this line as its official response: "The responsibility for these tragic deaths rests squarely with Hamas," which "intentionally and cynically provoke[ed] this response" in "a gruesome" propaganda attempt."

Shmuel Rosner takes this "human shields" trope to its ultimate "no apologies" conclusion in his notorious op-ed in the NYT, "Israel Needs to Protect Its Borders. By Whatever Means Necessary." Feeling "no need to engage in inge'nue mourning," Rosner forthrightly asserts that "Guarding the border [or whatever it is] was more important than avoiding killing." They want human sacrifice, we'll give 'em human sacrifice!

He acknowledges that Gazans "marched because they are desperate and frustrated. Because living in Gaza is not much better than living in hell," and that "the people of Gaza " deserve sympathy and pity." But the Palestinians were seeking "to violate [Israel's] territorial integrity," so "Israel had no choice" but to "draw a line that cannot be crossed," and kill people trying to leave that hell. It was "the only way to ultimately persuade the Palestinians to abandon the futile battle for things they cannot get ("return," control of Jerusalem, the elimination of Israel)." The alternative is "more demonstrations -- and therefore more bloodshed, mostly Palestinian."

Though he acknowledges that "the interests of Palestinians are [not] at the top of the list of my priorities," Shmuel nonetheless feels comfortable speaking on their behalf. He sincerely "believe[s] Israel's current policy toward Gaza ultimately benefits not only Israel but also the Palestinians." Following the wisdom of "the Jewish sages" (featuring Nick Lowe?) he opines: "Those who are kind to the cruel end up being cruel to the kind."

Related Topic(s): Gaza; Gaza Massacre; Great March Of Return; Jews For Gaza; Nakba; Seige Of Gaza; Zionism, Add Tags
Add to My Group(s)
Go To Commenting
The views expressed herein are the sole responsibility of the author and do not necessarily reflect those of this website or its editors.

STAY IN THE KNOW
If you've enjoyed this, sign up for our daily or weekly newsletter to get lots of great progressive content.
Series: "Israel and "Human Shields""