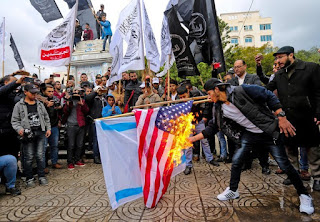 
It's a clumsy, all-too-obvious unmasking of decades of bipartisan U.S. policy whose contempt for Palestinians has been cloaked with a smile and a handshake.


As such, it's an embarrassment for the Zionist political and media elite that prefers to operate behind smiles and handshakes, and not flaunt their power.


It's an embarrassment to liberal Zionists and "peace process" promoters everywhere--in the American political parties and media, in European conservative and social democrat governments, and in Jewish Zionist organizations. For fifty years, they have laser-focused attention on the post-'67 "occupation," and done all that they can [nothing concrete], in solidarity with the Israeli Jewish peace movement [dwindling to insignificance in an increasingly fascistic political culture], to end the occupation [ minimize its cost to the Jewish state, 'cause "no concessions, no withdrawals, no Palestinian state" is already proclaimed Israeli policy].


It's an embarrassment to the Arab monarchs and the Palestinian Authority functionaries, who for decades have collaborated in the task of subduing Palestinian rage as Israel went about its colonizing project, holding out the promise that the good American Daddy and his kinder, gentler Israeli Jewish progeny would one day reward the Palestinians for their good behavior.


It's an embarrassment to those liberals who want to portray Donald Trump as a uniquely evil interloper imposed on American politics by a foreign power, rather than understand him as the product of an American political culture that they helped to create while obtusely refusing to recognize what they were doing.


The only parties who are not embarrassed are the "hard"--that is, intellectually honest and consistent--Zionists in Israel and the United States (many liberal Democrats included) and Donald Trump himself, who is immune to embarrassment.


All this embarrassment provides a fine example of the positive repercussions of the "Trump-effect" that I discussed in a previous essay, which is steadily eroding the thin remaining patina of America's "soft power" in the world, an essential support of the Euro-American imperialist alliance.


After all, Israel's relentless Judaization of East Jerusalem, consistent with its long-held declaration of sovereignty over the entire city, was proceeding swimmingly, with only the feeblest occasional murmurs of protest, accompanied by massive countervailing deliveries of arms and money, from the peace-process-loving governments of Europe and America. Trump's gratuitous, self-aggrandizing gesture, by unmasking that as the de facto acceptance of annexation that it is, only brings unwanted attention to the whole rotten game, and to the hypocrisy of those governments especially.


Good riddance to the pretense! As Noura Erakat says: "Trump has removed the emperor's clothes to reveal the farce of the peace process"[He] has finally ended the United States' double-speak and should have ended any faith that the US will deliver Palestinian independence or that Israel is interested in giving up its territorial holdings captured in war." And Rashid Khalidi: "Trump may have inadvertently cleared the air. He may have smashed a rotten status quo of US 'peace processing' that has served only to entrench and legitimize Israel's military occupation and colonization of Palestinian land for a quarter-century."


In other words, Trump has suddenly and single-handedly destroyed American's pose as the "honest broker" in the Middle east and the Solomonic arbiter of world affairs in general, in a way that forces the European and Palestinian political leaders to make an explicit break from what is now declared American policy. For now, of course, that break is rhetorical, but should it remain so--if European and Palestinian leaders do not work a political strategy independent of, and in opposition to, the United States--there will be no denying their capitulation and servility.


Indeed, Europe, in the person of the German Foreign Minister Sigmar Gabriel, has already laid down the markers for itself: "Germany can no longer simply react to U.S. policy but must establish its own position...even after Trump leaves the White House, relations with the U.S. will never be the same." Even after Trump leaves the White House. This is a recognition that the American regime--not just Trump, but precisely what he is the culmination of--is not a trustworthy and reliable partner for the management of global capitalist stability. This is what Trump is wreaking. And it's a very good thing.