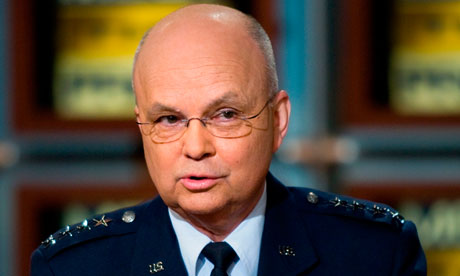 In 2006, the New York Times won the Pulitzer Prize for having revealed that the NSA was eavesdropping on Americans without warrants. The reason that was a scandal was because it was illegal under a 30-year-old law that made it a felony, punishable by up to 5 years in prison for each offense, to eavesdrop on Americans without those warrants. Although both the Bush and Obama DOJs ultimately prevented final adjudication by raising claims of secrecy and standing, and the "Look Forward, Not Backward (for powerful elites)" Obama DOJ refused to prosecute the responsible officials, all three federal judges to rule on the substance found domestic spying to be unconstitutional and in violation of the statute.

The person who secretly implemented that illegal domestic spying program was retired Gen. Michael Hayden, then Bush's NSA director. That's the very same Michael Hayden who is now frequently presented by US television outlets as the authority and expert on the current NSA controversy -- all without ever mentioning the central role he played in overseeing that illegal warrantless eavesdropping program.

As Marcy Wheeler noted: "the 2009 Draft NSA IG Report that Snowden leaked [and the Guardian published] provided new details about how Hayden made the final decision to continue the illegal wiretapping program even after DOJ's top lawyers judged it illegal in 2004. Edward Snowden leaked new details of Michael Hayden's crime." The Twitter commentator sysprog3 put it this way:

But inviting Hayden to do exactly that is what establishment media outlets do continually. Just yesterday, Face the Nation featured Hayden as the premiere guest to speak authoritatively about how trustworthy the NSA is, how safe it keeps us, and how wise President Obama is for insisting that all of its programs continue. As usual, no mention was made of the role he played in secretly implementing an illegal warrantless spying program aimed directly at the American people. As most establishment media figures do when quivering in the presence of national security state officials, the supremely sycophantic TV host Bob Schieffer treated Hayden like a visiting dignitary in his living room and avoided a single hard question.

Related Topic(s): CIA Director Michael Hayden; Edward Snowden; Media Bias; Media Complicity; NSA; National Security Strategy; Schieffer-Bob; Spying, Add Tags
Add to My Group(s)
Go To Commenting
The views expressed herein are the sole responsibility of the author and do not necessarily reflect those of this website or its editors.