Bernie Sanders at Medicare for All Rally in L.A.
(Image by Henry Samson)   Details   DMCA

Bernie received frequent enthusiastic applause from crowds attending his Los Angeles area events July 25 through 26, but most of his supporters in the Southland had no idea Bernie had come to town.

In Los Angeles, Hollywood and Santa Monica, crowds hung on every world as Bernie spoke in support of Medicare for All, criminal justice reform, decriminalization of drugs, obtaining pharmaceuticals from Canada, women's rights, immigration reform, and housing and health car as human rights. Attendees strongly voiced their support for his opposition to the government's stealing our tax dollars for war and income inequality. On issue after issue, the crowds went wild.

Nina Turner preceded him at all events. In Santa Monica, Bernie's wife introduced him. Jane Sanders is clearly the most popular First Lady contender America has had.

The seats were full by the time Bernie arrived but not without help from the attendees. It seems someone in the campaign failed to let the public know about the events, except in ads found in places that most of his supporters wouldn't have seen. Most Southland Bernicrats did not learn about the events until after it was too late to attend. Many heard about the events a day or two before or on the same day of the event. Volunteers had one or two days' notice. The press had over a week's notice.

Major network reporters were at the events, looking at partially empty venues when the time to start the show came and was delayed. But Bernie's popularity won out. Audience members started texting their friends and by the time Bernie walked out on stage, the seats were filled. Well not quite all. At an evening fundraiser at the Montalban Theater in Hollywood, would-be small donors were turned away, being told the house was full when the balcony was completely empty (except for a handful of people) and roped off. Later, after a lot of would-be donors left, people were told that more seats were made available and additional people were allowed into the balcony. The number of would-be donors turned away would have more than filled the entire theater, balcony included.

Little Tokyo's Aratani Theater (the venue for the 2 P.M. event on Medicare for All) was hidden from the nearby streets. There were no signs along the streets notifying Angelinos there was a Sanders event taking place. People walking down the nearby streets had no idea Bernie was in town. At the time the event was scheduled to start, a third of the downstairs was empty and the entire balcony was empty. Attendees present took to their phones and by the time Bernie spoke, the downstairs and balcony areas were full.

At the scheduled starting time for the Santa Monica High School event, large sections of the amphitheater were empty. The MSM (mainstream media), which has been strongly anti-Bernie was well aware of the empty seats. The event was delayed and the warm-ups were extended until, thanks again to texting by audience members, the place was filled. Notice the area around the Bernie letters at the starting time. Later that section was so filled that it was difficult to see the Bernie letters when he came out to speak. Bernie came out to a full cheering and excited audience that frequently broke into chants for Bernie. Just about every political position he discussed grew thunderous applause and excited the crowd.

After each of the events, people on the streets said they would have liked to have seen Bernie if only they had known he was in town. However, the theater event sign showed Bernie would be doing an event there. Otherwise no signs along the street hinted that the popular Presidential candidate was nearby.

So what happened? Back in March, tens of thousands rushed to Los Angeles to see Bernie in a much better advertised event. His popularity has only increased. In the meantime, he has appointed Los Angeles's Susie Shannon to be his California Political Director. Quite a number of the Sanders supporters blamed Shannon and some even accused her of deliberate sabotage. A couple said she had a long history of doing this to organizations she had worked with. These reports were unverified but she was the subject of considerable finger-pointing. The team member who turned people away at the Montalban was referred to as Melissa but it is unknown whether she was told to do this or if she was acting on her own. Whoever or whatever was responsible, Bernie's staff needs to inform the public of his future events so that people will show up without the audience self-help. To win the nomination, momentum is important and supporters need to know there is an event if they are to attend an event. The MSM doesn't need any more ammunition caused by improperly planned events that make Bernie look less popular than he is.

As a closing note, many audience members were calling for a joint Sanders/Gabbard ticket. Tulsi and Bernie are considered the two people's candidates of the 2020 election. Most of their supporters have contributed to both contenders in order to get their message out and guarantee that one of them is nominated for President in 2020. 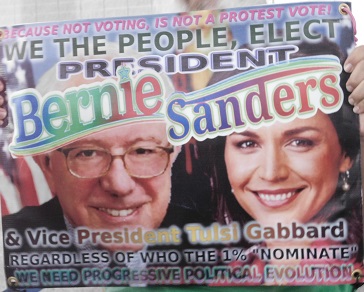