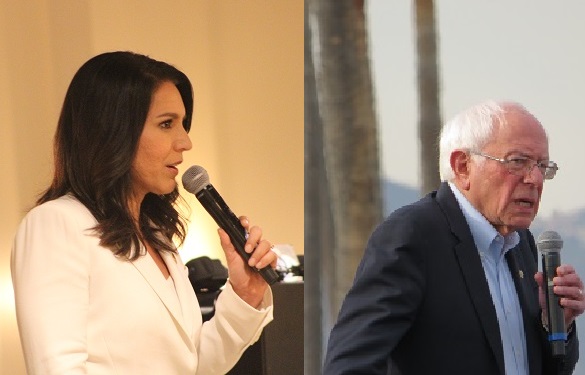 Bernie Sanders is on the road to winning California in March, thanks in large part to Tulsi Gabbard. In the July Democratic debate, Tulsi called out Kamala Harris for her misuse of her office to persecute innocent inmates, drug users and minorities while Kamala was San Francisco's District Attorney and California's Attorney General. Following the July confrontation, Kamala plummeted in the polls. Unable to regenerate support, Kamala finally dropped out of the race. Prior to the July debate, many expected Kamala to win her state of California.

The beneficiary of Tulsi's take-down of Kamala has been Bernie Sanders, resulting in much of Kamala's support going to Bernie Sanders. At the December 21, 2019 rally in Venice, Reggie Jones-Sawyer a very influential Democratic leader and Assemblymen in California spoke of how, after his candidate Kamala Harris dropped out of the race, he started feeling the Bern and was now endorsing Bernie Sanders. Reggie had been anything but a Bernie supporter prior to Kamala's fall from grace in July. In 2016, he backed Hillary Clinton over Bernie. Before being elected to the Assembly, Reggie was an elected official in the California Democratic Party and his opinion carries a lot of weight with California's party members, especially super-delegates. Reggie is not alone in switching to Bernie. In California, the fallout from Kamala's demise has also resulted in a strong upswing in support for Bernie Sanders in the polls.

In Venice, Bernie spoke to a crowd of over 14,000. On stage, Tim Robbins, Cornel West and Congresswoman Alexandria Ocasio-Cortez spoke on behalf of Bernie. Bernie was accompanied onto stage by his wife Jane. Anyone seeing the crowd that arrived for the rally could not doubt that Bernie Sanders is the frontrunner in California.

It wasn't just Bernie who was popular. Tulsi hats could be seen in the audience and many in the crowd said they were hoping for a joint ticket of Bernie and Tulsi. Some who came to watch Bernie said that Tulsi is still their number one choice while Bernie is their second choice. Several of the volunteers said they were personally supporting both Tulsi and Bernie. After Reggie's speech, a number of a people and one staff person said they felt Bernie owes Tulsi for taking down Kamala and that he needs Tulsi back in the debates to finish off the rest of his opponents. The last debate had an historically low viewership. Niko House of the MCSC Network did a show about the low ratings the last debate received. Tulsi announced she was boycotting the debate before the closing of the polling period. Though she has more than enough donors and has scored in 5th place in most large polls with low margins of error, CNN was caught omitting her name from its final poll. Niko did a show with pictures and graphs of that CNN poll and discussing polling irregularities. Most people interviewed in the audience said they did not watch the last debate. 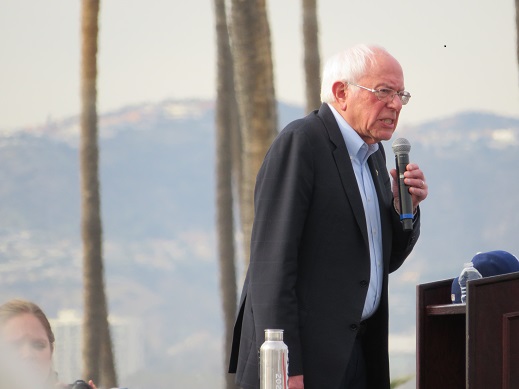 Bernie's rallies in the Los Angeles area could use a public relations professional managing the events. Handicapped people were forced to wait in long lines to have their belongings searched. The porta-potties looked as if they hadn't been cleaned in a month and apparently didn't have any flushing mechanisms. There were signs of number 2 all over the floor of one of the disabled bathrooms. Even volunteers were encouraging people to complain about the facilities. The person in charge of the press gave special privileges and locations to news sites that have reported less than favorably about Bernie. This is standard operating procedure for the handling of the press at most Bernie events. One newswoman fell and may have been injured on the stands. Fortunately for her, reporters came to her assistance as no staff members were seen assisting her. This is in contrast to the woman who, thanks to the Bernie staff, received immediate assistance upon collapsing in Rancho Mirage. Upon leaving the rally, people were trapped and blocked from exiting to their vehicles as they had to wait for V.I.P.'s to leave through an exit that cut off the crowd from the parking lots and the nearby street and sidewalk. A couple of people said that they needed to get across the blocked path to their kids but were told that protocol trumped their needs. The blocking of the exit may have been a potential public safety hazard. Those are some issues that the Bernie campaign should handle before the next Los Angeles area rally. Bernie rallies in other West Coast Counties seem to be better organized.

The Democratic Establishment attempts to suppress both Bernie Sander and Tulsi Gabbard have failed and both may be unstoppable forces that the Establishment will have to live with. In 2016, it was Tulsi Gabbard who gave a gigantic boost to Bernie's campaign by stepping down from the DNC to back Bernie. Now, by taking down his biggest opponent in California, Tulsi may have handed the 2020 nomination to Bernie Sanders.