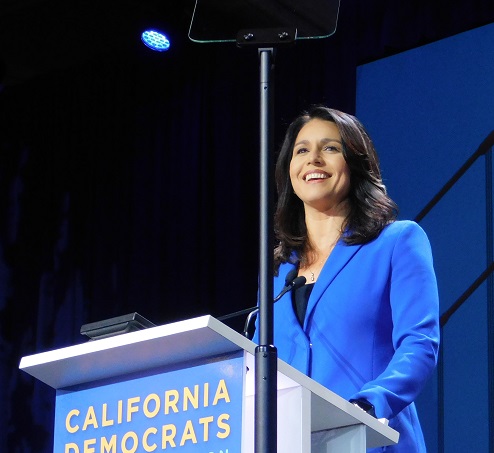 On the first day of the floor speeches (second day of the California Democratic Convention), Tulsi got the largest and most frequent applauses of the various candidates appearing. (Bernie isn't speaking on the convention floor until the final day.)

But election rigging was already in the air. The CDP's sound mixer turned down the volume in the rear half of the hall for Tulsi's speech while having a much higher volume for the speeches before and after Tulsi's. She was sandwiched between pro-Wall Street establishment candidates more to the liking of the CDP. Because of the sound-mixing, the audio on the stage sounded normal during Tulsi's speech while delegates in the back were straining to hear. Add to this, the chattering of a group of non-delegates connected to other candidates, in the back of the hall only during Tulsi's speech and it appears that there was an attempt to deprive a large percentage of the delegates of he opportunity to hear Tulsi. The CDP did this same sound trick last year with another candidate they did not want the audience to hear. Unfortunately, this is very commonly done at the conventions.

One observation regarding the other speakers on Saturday was that most were reading from three teleprompters. There was a teleprompter on each side of the podium and another on the podium. Tulsi split from the trend and spoke from the heart without needing the teleprompter crunch others seemed addicted to using. 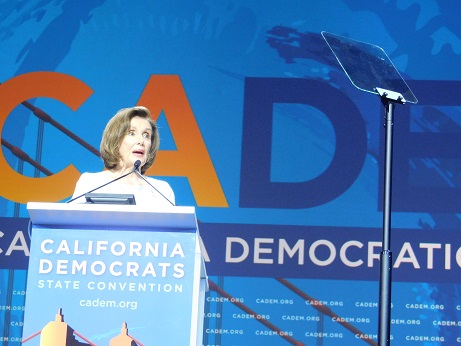 Tulsi, a Major who served two tours in Iraq, knows the human cost of war and wants to end all regime change wars and sanctions that are killing so many. She feels the money could be better used to provide college for all, health care for all and to end homelessness in America. (In a previous event, Tulsi stated that housing was a human right.) Tulsi is the one candidate standing against fossil fuels. She is the force behind the Off Act, which, if enacted, will take America off fossil fuels and nuclear power. (America is still recovering from radioactive fallout from Fukushima that has damaged America's food and water supply.) Tulsi has a 100% record on LBGTQ matters and spoke against bigotry and discrimination. On issue after issue, Tulsi received thunderous applause. The crowd, regularly shouted, "Tulsi, Tulsi," as if she were a rock star.

When Tulsi arrived at the Convention, she was greeted by the largest team of supporters of the candidates to date. Even people who are uncertain about backing her are mostly admitting that Tulsi is the best on the issues. Even Cornel West has admitted she is the best on foreign policy and needs to be on the ticket. The general feeling is that Tulsi and Bernie will be running mates in 2020. She conferred with him before entering the race.

Though there were no floor speeches on Friday, Bernie Sanders spoke at numerous caucuses, receiving a standing ovation at each. Some of the caucuses closed their doors due to being over-filled after Bernie arrived. Jane was at the Environmental and Asian American Caucuses.

A large crowd followed Bernie from caucus to caucus Friday night with some of the supporters joking about how following him around was like stalking him. Bernie received a "Thank you" from a member of the California Attorneys for Criminal Justice for his support for felon prisoner voting rights. It is felt supporting prisoner voting rights will end mistreatment of prisoners and mass incarceration.

Ro Khanna (Bernie's campaign co-chair) introduced Bernie at the Asian Pacific Caucus. One person was heard discussing Venezuela with Ro. Ro agreed with the delegate that Nicolas Maduro was not a dictator and that he was fairly elected. Ro also agreed that Juan Guaido had never been elected. Some wondered why Ro will not say this publicly.

Aside from the rigging of the volume on the speeches, there were other major complaints. Some of the delegates complained that there was a great deal of discrimination against disabled people. At Friday's Chairman Reception, people with service dogs were told they couldn't have their service dogs with them. Disabled individuals who were among the reporters up front, were removed from their seats and threatened with removal of credentials. Disabled reporters were told that they were not even allowed to sit in an empty chair designated for disabled people up front or they would lose their credentials. Those chairs were later filled with non-disabled people. A couple of these disabled reporters were also delegates. One of the disabled people developed some serious health consequences as a result of the treatment. All this goes with the party's policy of talking the talk but not walking the walk. There were only 2633 delegates at the convention (according to the official count), fewer than in previous years. But there were enough for a quorum to start the convention. Oddly, over 3100 voted in Rusty Hicks's victory for Chairman.

One candidate is walking the walk. That candidate with the courage to stand up to the establishment is Tulsi Gabbard, who stated very clearly that the problem was not just the Republicans but also the Democrats who represented corporations over people. Most delegates who were questioned said Tulsi was best. There was some concern about her minimalization. But with all the rigging and all the minimalization, Tulsi is proving to be a rising star that the establishment can't keep down.

Henry has been a professor of political science and legal ethics and an advisor to many successful candidates for public office. He is currently working on a book about the inequality crisis in America.
Related Topic(s): Bernie Sanders 2016 Presidential Candidate; Democratic Primary; Gabbard-Tulsi; Gabbard-Tulsi; Gabbard-Tulsi, Add Tags
Add to My Group(s)
Go To Commenting
The views expressed herein are the sole responsibility of the author and do not necessarily reflect those of this website or its editors.