Bermie Sanders swept through San Diego and Los Angeles Counties on August 5yh and 6th speaking at town halls on Immigration and housing and a rally at Long Beach City College. Unlike his last Southern California sweep, the publicity went out this time and his events were packed.

On Sunday (August 4th), Tulsi Gabbard made a surprise visit to Venice, California. On Sunday, very few people received even last minute notice that she was in the area but somehow a large crowd of supporters managed to rush to her location to the point there was a massive overflow onto the streets. The campaign kept her unscheduled appearance relatively quiet but word got out and people who learned about her presence in the area dropped what they were doing to see her. Tulsi has been so popular following her take-down of Kamala Harris and Tim Ryan that she doesn't even need to publicize her location for crowds to seek her out and show up.

No other candidate has the draw among California audiences that Bernie and Tulsi have. 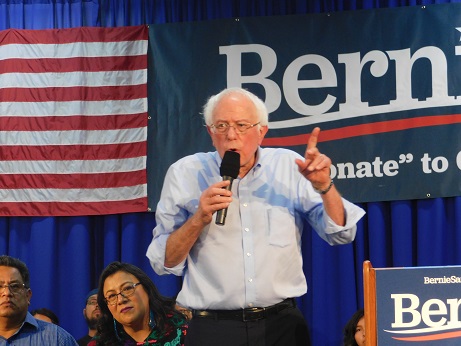 The most moving of Bernie's events was his Immigration Town Hall in Vista where Bernie showed his compassion for immigrants, the homeless and those in need of health care. After introducing local leaders concerned about the mistreatment of immigrants, Bernie took a number of questions about a variety of important issues, such as the fears immigrant children have that their parents might be rounded up and not come home at night and about people who are covered by insurance that will not pay for necessary medical care for their children. Some participants spoke of critical conditions not covered by their current insurance and of denials of care. A husband and wife in one family were working full time and could not afford a place to live. Bernie listened to touching story after touching story and the crowd really got that he cared. 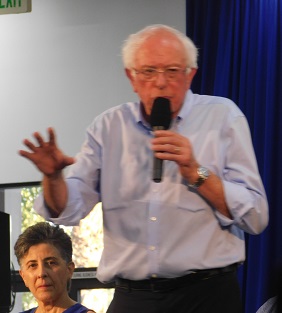 The most enthusiastic audience was at the Long Beach City College evening rally. The crowd went wild over each point Bernie made. He spoke about health care, immigration, housing, criminal justice and education. His positions resonated with the crowd each time.

While Bernie was impressive and those who saw him were thrilled at his performance, internal sabotage seemed to be in the air. Media, particularly independent media, was instrumental in educating and exciting the public about Bernie. At the Housing Town Hall, his least attend event (about 400 people) dis-invitations were sent out to various members of the press who didn't get their contradictory confirmations that they were invited to attend the town hall until just before it was to start. Those dissed before being approved too late to attend included reporters for a legal journal whose journalists include attorneys who have been working to assist the homeless. Big Faux Pas. Some members of the media were very upset about the handling of this event and questioned whether it involved some kind of internal sabotage that Bernie should be made aware of. Some reporters actually said they would be reluctant to change future plans to attend Bernie events until media relations were fixed.

Reporters from the Indymedia also noted that they were given much poorer filming locations at Bernie events than at events for other candidates. All the front slots go to the corporate media. In other words, the media that has been attacking Bernie while building up other candidates are treated superior to the media supporting Bernie. At Vista, the only designated slots for the press single-elevation riser were for the top 1% anti-Bernie corporate press. A number of Indymedia people got a little footage and then left. A photo of the riser shows minimal media present. In 2016, after reportedly posting porn on the Bernie's Facebook pages, Correct the Record was given prime video locations at his events. This led some to ask if whoever is in charge of the press for the campaign is really backing Bernie. When you add this to the fact that someone who seemed to be in a position of authority at Bernie's booth at the May/June California Democratic Convention was pushing Elizabeth Warren over Bernie, Bernie may have some house-cleaning to do.

In contrast, Tulsi's campaign has been very supportive of the Indymedia. She knows they are on her side and so does her staff. When she toured Los Angeles's homeless community it was to discover how bad the situation was and her campaign didn't reach out to the corporate media for photos ops. The next day she put together volunteers to pick up trash in MacArthur Park in Los Angeles but it was the Indymedia that covered this event. In fact, many members of the Indymedia assisted with the clean-up. Many of Tulsi's supporters have been Berniecrats and wish his campaign would be more grass roots this time.

Bernie's volunteers are generally very nice and polite but often the official staff has been rude to the guests, such as where they turned small donors away in Hollywood when the balcony was pretty much empty. In Vista, plastic sealed water bottles were taken away from disabled people who needed the water for their health in the sweltering heat that had most participants fanning themselves at points. Women were often patted down by male security guards. In Long Beach, a seemingly untrained dog was used to check the bags of women at one gate. At least at Long Beach, they used wands on the participants, instead of the pat downs.

Tulsi and Bernie are the closest to each other in ideology of the candidates who have been on stage. Mike Gravel, who is also a progressive, made the debate requirement for July but was denied admission in violation of the DNC rules. Tulsi has won both of her debates. Bernie did well in his first debate and came out swinging to be the clear winner of his second debate. The corporate media hates both, smearing both candidates with lies and untruths. The corporate media is run by the defense industry and Wall Street. Bernie and Tulsi are seen as their biggest threats. The corporate media is especially afraid of Tulsi as she has taken down two of their favored candidates and been the top searched candidate following her debates. The MSM doesn't know how to stop public support for Bernie and Tulsi. The public has an answer. It wants to see a joint ticket of these two candidates in November, 2019.

Henry has been a professor of political science and legal ethics and an advisor to many successful candidates for public office. He is currently working on a book about the inequality crisis in America.
Related Topic(s): Bernie Sanders; Bernie Sanders 2020 Presidential Candidate; Debate; Events; Homeless; Housing; Immigration; Media; Presidential Candidate Tulsi Gabbard; Presidential Election 2020; (more...) Tulsi Gabbard, Add Tags  (less...)
Add to My Group(s)
Go To Commenting
The views expressed herein are the sole responsibility of the author and do not necessarily reflect those of this website or its editors.