Amidst a heavily armed police presence, California Democrats attended their endorsement convention the weekend of November 15-17, 2019, in Long Beach. Never before had there been such a strong and visible police presence at a California Democratic Convention. There were metal detectors and lists of over 50 categories of prohibited items. Upon entering the Convention Center, a couple of delegates remarked that it appeared they were in a war zone and public enemy number one. 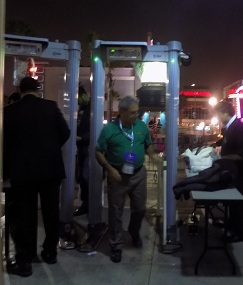 In a sell-out to Univision, delegates and other media were treated as second class citizens, for the Presidential Forum. The CDP gave all rights to its own forum to the Univision corporation. Delegates were told they would be locked in the arena an hour before the event and would have to stay until it ended. Only those with silver tickets (celebrities and people given tickets by celebrities) were allowed to sit in the front sections of arena. Delegates who previously had been sitting in the front section were considered second class viewers and had to find new seats behind. Handicapped people were turned away from the handicapped seating. All press, except those who were delegates, were forced to watch from a special viewing room. 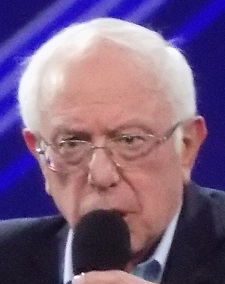 In the midst of finding that the CDP cared less about their interests than corporate interests, the delegates made their voice heard loud and clear for Bernie Sanders. Bernie was the last of the eight candidates who spoke at the Forum. It was not just that the crowd went wild when he came onto the stage. He gave the answers that everyone had been waiting for. Univision host Jorge Ramos was heavily booed when he asked Bernie if he was going too far to the left to win the general election. Bernie told Jorge, he didn't think so and that the issues they were talking about were supported by the vast majority of people. The final question involved Bolivia. This is where Bernie proved he had the guts to stand up against the Establishment. When Ramos echoed right wing attacks on Evo Morales, Bernie said he didn't agree.

"I think Morales did a very good job of ending poverty, in giving the indigenous people a voice they never had before."

And Bernie called the take-over a military coup more than once. His final statement that drove the crowd into an uproarious supportive frenzy of cheers was as follows:

"But at the end of the day, it was the military that intervened in that process and asked him to leave. When the military intervenes, Jorge in my view, that's called a coup."

His comments regarding Bolivia convinced many undecided delegates to jump on board his campaign. Exiting the events, some of the delegates said they could not recall anything said but Bernie's last lines about Bolivia. No other candidate received anywhere near close to the support received by Bernie at the Convention.

After the Forum, Bernie spoke at several caucuses, including the California Young Democrats, the Progressive Caucus and the African-American Caucus. His wife Jane accompanied him to the caucuses. He was followed from caucus to caucus by crowds of supporters.

Boycotting the California Democratic Convention were Joe Biden, Elizabeth Warren and Tulsi Gabbard. Though Tulsi knew she was welcome to speak in at least the morning session of the convention as early as May and was later invited to speak at the Forum, her campaign said she had a prior engagement to be in Seattle. However, they acknowledged that the prior engagement was much more recently planned. Some of her supporters said that she was snubbing the Democratic leadership that had initially refused to put her in the Presidential Forum though offering her a solo spot to speak to speak in the Saturday morning session, usually the most attended session. To many of her supporters, a non-prior prior engagement or snubbing the leadership (whichever it was) was an insufficient excuse as there were 5000 delegates and guests that she was also snubbing in not attending. In Tulsi's defense, close to half the delegates also boycotted the primary session on Saturday morning session, altogether and whole sections of the seating made the convention look like a ghost town. Some suggested Tulsi's campaign was being internally sabotaged by her events coordinator. Tulsi had already lost her most active county captain, a Los Angeles volunteer who had put up the best website for her campaign. Several Los Angeles supporters commented that appreciation for volunteers was not one of the campaign's strong suits. Yet, Tulsi is the one candidate who is rising in the polls, recently polling 9% in a national poll. She will be in the November debates and is close to qualifying for the December debate. Joe Biden also skipped the May Convention. Elizabeth Warren's campaign just said their candidate was busy campaigning. Normally CDP Conventions only happen once a year but this was an exception to that.

On the final day, the platform committee came down on the side of racism, in incorrectly ruling the opposition against the amendment put forth by Jewish Voice for Peace (JVP) had more votes and the Resolutions Committee forced through support for pre-crime lockups of innocent people pending trial..

To those on the floor, the appearance was that the JVP platform amendment had clearly won with more votes than the opposition. The amendment called for "a solution of the Israeli-Palestinian conflict negotiated by the parties that guarantees equality, security and democracy for all, no matter what the final settlement regarding states and borders." It also called for the state Democrats to "oppose any unilateral annexation of territory and support the right of all those who were forced to leave from their homes to return to their homelands and receive compensation for their losses."

The chairing of the fight over the amendment was turned over to Colby King. The gist of the arguments against the amendment was that, because six million Jews were killed almost 80 years ago in the Holocaust, it would destroy Israel to allow a platform amendment calling for equality, security and democracy for all. If this makes sense to you, please explain how. To most present, this appeared to be a fair and neutral amendment. Among those opposing a free Palestine was California State Senator State Weiner, who is part of the CDP Pro-Likud group Democracy for Israel. From the raising of lanyards, it appeared that the retention of the Amendment passed. However King called it the other way. King refused to recognize calls for division, meaning a hand-counting of the delegates on each side of the issue. This violation of the official party rules is standard operating procedure when the chairman knows the vote will go against his position. Many of those wearing lanyards on the floor were guests of the Democracy for Israel group as opposed to actual delegates. It is difficult to tell which side has won a close vote unless official delegate ID cards are hand-counted after delegates go to their section of the floor. Instead of following the rules, the microphones were cut to drown out the calls for a hand-counting of votes. As a result of the incorrect calling of the vote the right of Gaza killed more innocent Palestinian children, a common occurrence. The Democratic leadership has a long history of supporting the targeting of children in Palestine.

The Resolutions Standing Committee violated its own rules as it pushed through support for a referendum that would allow detention without release of people from low income or minority areas under the Minority Report risk assessment precog provisions of SB10. The Resolutions Chairwoman refused to tell the delegates the truth about what was being voted on or that the ACLU and the California criminal defense bar (California Attorneys for Criminal Justice) had opposed SB10 because of the pre-crime incarceration provisions. Several criminal defense attorney delegates tried to pull the issue from the Resolutions consent calendar but, in violation of the rules, the microphones set up for pulling items from the calendar were muted and the Resolutions chairwoman refused to recognize any delegates trying to pull anything for discussion. In the large auditorium, individual voices couldn't be heard by the bulk of the crowd when the microphones are muted.

The Long Beach Police Force has one of the worst records of shooting unarmed civilians in America In one year, they shot 42 unarmed civilians, including Donte Lamont Jordon. Donte Jordon was walking home to pay his rent in preparation for his planned marriage to the mother of his little girl when police saw that there was a Black man walking down Anaheim Boulevard. Somewhere in Long Beach some other Black man had reportedly committed some kind of crime. The police stopped their cars, jumped out and repeatedly fired assault weapons at Donte Jordon, who fell face down on the painted left turn marking on the pavement of the side street where he lived. So many police bullets had been sprayed that they created holes in the building across the street. Hitting Donte nine times wasn't enough. After Donte was lying, bleeding face down on the turn arrow, the police plugged him twice more in the back to be sure he was dead. A few delegates commented that the armed police presence made them feel more unsafe.

This was the first convention Rusty Hicks chaired. To some, it was the most racist and the most disrespectful to the delegates in the party's history. The reasons for the removal of the previous chairman have been disputed by many delegates who felt it was a power play to overturn a fair election. Regardless of that, the Democratic Party is not known for fair party elections as was seen in 2016 when most Americans feel the DNC stole the nomination from Bernie Sanders. More than a few delegates expressed the belief that the nomination would be fraudulent again this year, guaranteeing the re-election of Donald Trump.

Henry has been a professor of political science and legal ethics and an advisor to many successful candidates for public office. He is currently working on a book about the inequality crisis in America.
Related Topic(s): Bernie Or Bust; Bernie Sanders 2016 Presidential Candidate; Bernie Sanders Foreign Policy; Bernie Sanders Presidential Campaign; Bolivia; Evo Morales; Free Palestine; Military Coups; Military Training School Of The Americas; Police Shooting; (more...) Police Violence, Add Tags  (less...)
Add to My Group(s)
Go To Commenting
The views expressed herein are the sole responsibility of the author and do not necessarily reflect those of this website or its editors.