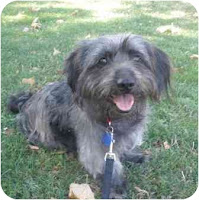 (Image by Unknown Owner)   Details   DMCA
On our daily jaunts we bob and weave to avoid interacting with others. In the event that the timing is off or traffic is too high Mylo goes crazy -- hurling himself against the leash, barking and carrying on. Honey protects the home front in the event anybody has the temerity to saunter past the property they'll hear her howling and yapping. One interpretation of this behavior is that they are protective pups. Another proves the axiom true: pets emulate their owners. (To be in compliance with the February 19, 2001 West Hollywood law: "companions emulate their guardians.")


Right above my doorbell is a small (yet tasteful) homemade sign: "No Solicitation. Yes, that means you." Living a few houses off of a major urban street and a few blocks from a large high school in a neighborhood of family homes the volume of door-to-door merchants is amazingly high. 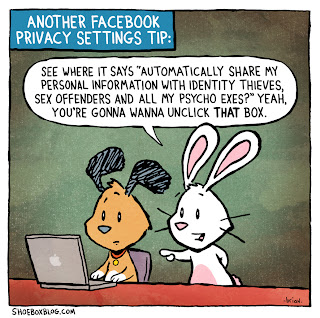 (Image by Unknown Owner)   Details   DMCA
As somebody who cherishes real-world privacy it's ironic how much I give away online. For convenience, for discounts and for efficiency I have many digital relationships that compromise my privacy. Facebook, the world's largest social media network has access to huge amounts of information on me (even though I have the permissions set very strong). I knowingly waive some of my privacy for the benefits that the service provides. Just this week I reconnected with a dear friend that I haven't been in touch with in over thirty years. Facebook targets me with ads related to things in my profile and postings that align to my interests on the right side of the screen. I don't have to interact with them and often don't. The result is that I have reestablished many relationships, created new ones and gotten a lot of value by allowing Facebook access to some private information.
Every Saturday morning I toddle off to the grocery and use their "rewards" card. I save about 30% each week -- about $20. In exchange the store knows what I buy and they send me coupons to try other brands. It's another example where the value I receive outweighs the loss of personal privacy. In each instance it's my choice what to reveal.
For the past week I have been getting email after email saying that my privacy has been breached. Wells Fargo, Chase, Ralph's, CitiBank, Marriott, Best Buy and Capital One have all written me with their regret that there was a "system breach" and some of my personal information was released to a hacker. Fear not, the correspondences say, we care about you and "we take your privacy very seriously." So seriously that more than 50 blue-chip companies outsource my personal data to one company, Epsilon. They were hacked. 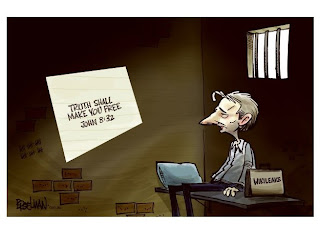 (Image by Unknown Owner)   Details   DMCA
Private Bradley Manning is the 23-year old Army private who has been in military lockup since he was arrested in May 2010 for allegedly downloading a huge volume of secret U.S. military and diplomatic documents to Wikileaks, which became headline news worldwide. The release of information arguably accelerated regime changes in the Middle East and has had some embarrassment for the Administration. Manning is being held in a Marine brig in what the American Civil Liberties Union calls "prolonged isolated confinement and forced idleness." Every day he reportedly spends 23 hours in a 6-by-12-foot cell, and is allowed to exercise -- shackled -- for one hour in another windowless room. He is often stripped and forced to stand naked outside his cell to be inspected, has his sleep interrupted frequently, is periodically deprived of his reading glasses, and generally is subjected to treatment meant to "degrade, humiliate, and traumatize . --. --."
Last month State Department spokesman P.J. Crowley denounced the conditions of Bradley Manning's detention as "ridiculous, counterproductive and stupid," forcing President Obama to address those comments in a Press Conference and defend the treatment of Manning. A few days later Crowley "abruptly resigned under pressure from White House officials."
One day after his Inauguration President Barack Obama said: "Transparency and the rule of law will be the touchstones of this Presidency." Last week the President received an award for making the government more open. In homage to irony the ceremony was held in secret. 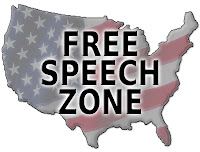 (Image by Unknown Owner)   Details   DMCA
A key element of a free society is the open exchange of ideas. In any organization, whether it is a business, a non-profit organization or a government agency -- it is an ongoing exercise to communicate and keep all of the stakeholders engaged in the dialogue. As a business strategist and consultant I've seen too many organizations succumb to the ease of making "executive decisions" without doing the hard work of constant communication. Virtually every time there is a decision without buy-in there are tremendous consequences that take far more effort to resolve than if the issues were openly discussed, even argued. Agreement isn't the goal of transparency, understanding is. In a free society that's the job of the media -- to foster openness.
In the United States we rely on the media to expose, enlighten and educate us on issues. Newspapers once held the baton of investigative journalism to keep the people informed. Then came 60 Minutes. Today Anderson Cooper is "keeping them honest." An evolution of transparency is Wikileaks which releases massive amounts of raw data for the public to evaluate on its own.
It is incredibly dispiriting to see Private Manning treated worse than Aldrich Ames (the convicted CIA analyst who compromised more CIA assets than had any Soviet mole in American history). There hasn't been a trial. He is accused. In America he's supposed to have a presumption of innocence. His treatment is shameful and fundamentally violates American values. The relative silence from the media and the public gives tacit approval to pre-punishment against Manning and anybody else the Government thinks has done something. That growling you hear is me now emulating the dogs.
For more blogs by Craig Coogan visit:  www.craigcoogan.blogspot.com
To learn more about the author visit:  www.craigcoogan.com

Craig Coogan is a strategist, entrepreneur and commentator who examines issues with his unique perspective.
Related Topic(s): America; Digital; Journalism; Media; Newspapers; People; Privacy; Privacy; Privacy; Transparency; (more...) Wikileaks; Wikileaks; Wikileaks, Add Tags  (less...)
Add to My Group(s)
Go To Commenting
The views expressed herein are the sole responsibility of the author and do not necessarily reflect those of this website or its editors.