Click Here to Remove All Ads
Anniversaries are opportunities to celebrate, remember and plan. Two major milestones just passed: the 30th Anniversary of the first case of AIDS reported by the CDC (June 5) and the 40th Anniversary of President Nixon declaring the War on Drugs. Each marker reflects the times they occurred in and are a benchmark for where society is today. There are lessons worth repeating in their evolutions.
The first days, months and years of AIDS were marked by fear and uncertainty. Doctors and scientists couldn't immediately state how people contracted it, how it spread -- but could only confirm that it had a 100% mortality rate. President Reagan didn't utter the acronym during his entire tenure in office. Many media outlets ran the wildest of speculation, allowing panic to spread. People were ostracized. Contracting AIDS was the equivalent of being a leper. Some even wanted to move everybody with AIDS to an island.
The LGBT community in the U.S. was hardest hit. Virtually an entire generation died. Traditional resources were scarce, compassion and understanding even more so. What happened? The community rallied. Millions of women and men "came out" allowing for the decriminalization of homosexuality in the U.S. and giving voice to a people that previously barely spoke.
The LGBT community built an infrastructure that didn't previously exist. Organizations sprang up to provide buddy support, medical services, transportation, food -- everything and even more. The community funded research institutes to find a vaccine. Where stumbling blocks existed, activists knocked them down -- whether it was to reduce the approval time for drugs or get legislation passed to protect patients from discrimination.
15 years into the epidemic the "cocktail" drug therapy first emerged. This discovery changed HIV/AIDS from being a death sentence to a disease that could be managed, albeit with difficulty. Despite this progress, approx. 25 million people have died in the past 30 years. Today 5,000 people will die. Same tomorrow. And the next day. Over 33 million people are living with HIV/AIDS which has become the fourth leading cause of death in the world.  There is still much research and scientific discovery to be done to better understand, manage and eradicate this disease but the drugs have saved another generation.
Drugs of a different sort is what President Nixon wanted to eradicate. On June 17, 1971 he declared a "War on Drugs" which was likely a response to the perceived pervasiveness of the 1960's. It began the Noble Experiment version 2.0. The original Noble Experiment was Prohibition of alcohol from 1919-1933 when crime increased 24%. Immediately after the repeal of Prohibition, gangsterism went into a swift decline. All of the major gangs disappeared within 18 months and the murder rate dropped every single year for more than a decade.
Law Enforcement Against Prohibition (LEAP) released a 40th anniversary report this month on the current Drug War. The report documents over a million people arrested, more than a trillion dollars spent and rampant gangsterism in the U.S. and abroad. Drug use is at record highs. It's been an abject failure. 40,000 law enforcement professionals support LEAP. It is not a fringe group. Drug enforcement is their expertise.  They say the reason for crime epidemic is not because of drug use but because of the drug laws - most of which were introduced by the Reagan administration in the 1980's. 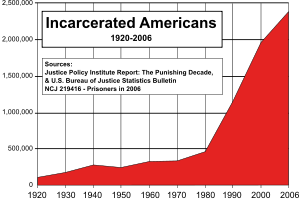 (Image by Unknown Owner)   Details   DMCA
The U.S. incarcerates more people than any other country in the world. The rate has grown exponentially because of the drug laws. Over 50% of all Federal prisoners are in jail due to a drug offense. Certainly if somebody commits a violent crime -- theft, mugging, homicide, etc. -- they should be punished"and they are and that is tracked separately. The question is whether people should be put in prison on the taxpayers dime because of behavior.
People should not do drugs. They alter the mind, they affect the body. (The same can be said of sugar!) What would happen if Americans were allowed to make their own decisions about drugs? Anarchy would run rampant and overnight we'd be a nation of whacked-out junkies! Well, not likely...and not more so than we already are.
In 2001 Portugal decriminalized drug use. After just 5 years rates of lifetime use of any illegal drug fell from 14.1% to 10.6%. Deaths related to heroin and similar drugs were cut by more than half. The number of people on drug regimens for addiction rose to 14,877 from 6,040 after decriminalization. Money saved on enforcement allowed for increased funding of drug-free treatment and crime rates fell.
How much more proof do we need? We have our own experience with Prohibition and current data from Europe that shows that drug laws are the problem. No matter -- what has failed in the past will continue: it's political reality.
Philosopher George Santayana famously wrote: "Those who cannot remember the past are condemned to repeat it." Reflecting on these anniversaries the past informs us that legislating behavior doesn't work. Community will respond to care for its own against all odds. When free to choose people say no to drugs, crime goes down and society benefits. That's something worth repeating.
For more blogs:  www.craigcoogan.blogspot.com
For more about author:  www.CraigCoogan.com
Follow on Twitter:  @craigbcoogan

Craig Coogan is a strategist, entrepreneur and commentator who examines issues with his unique perspective.
Related Topic(s): Aids; Community; Crime; Discrimination; Drugs; Failure; Funding; LEAP; LGBT; Law; (more...) Panic; Prisoners, Add Tags  (less...)
Add to My Group(s)
Go To Commenting
The views expressed herein are the sole responsibility of the author and do not necessarily reflect those of this website or its editors.