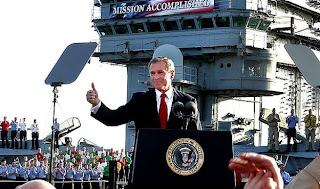 (Image by Unknown Owner)   Details   DMCA
May 1 is a day full of history.  It is a holiday in socialist countries in honor of labor and labor organizations. Law Day, U.S.A. and Loyalty Day are celebrated in the U.S. as a way to counterbalance the communist celebrations. On May 1, 2003 President George W. Bush (43) gave his infamous "Mission Accomplished" speech. May 1, 2011 Pope John Paul II was beatified and President Barack Obama announced the U.S. assassination of Osama bin Laden.
On television there's impromptu crowds gathering, dancing and singing, chants of superiority and celebrations of victory. That was the scene in many Middle Eastern countries on September 11, 2001 after the news reported that two planes had crashed into the World Trade Center killing thousands. It was repugnant. The aversion I felt then is equaled today watching many cheer the murder of Osama bin Laden.
There's little doubt that the world is better off with the mastermind of Al-Quada dead. The network of radicals he led has called for a global Jihad and they are believed to have been behind terrorist attacks that have killed thousands of innocent people. His death will likely be more symbolic to the world than effective at actually curbing the organization's efforts -- and may actually incite a response continuing the cycle of violence. Good riddance.
On February 11, 2008 Candidate Obama said: "We are going to have...a Justice Department that believes in Justice. And, you will elect a president who has taught the Constitution, and believes in the Constitution and will obey the Constitution of the United States of America." 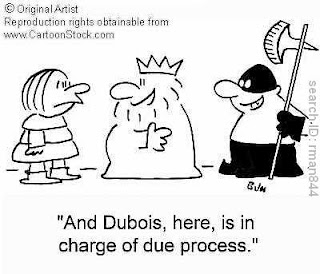 (Image by Unknown Owner)   Details   DMCA
Due  Process has been around since the Magna Carta, is the backbone of the U.S. Constitution  and is the distinguishing factor in Democracy over any other form of governance. Due process holds the government subservient to the law protecting individual persons from the state. Article 3, Section 3 covers treason: it has to be proved with witnesses before any punishment imposed. In every single instance the founders intended for due process to be the predominate right of all. Nowhere do the founders grant the right of any one person to unilaterally kill another without consequence. Even in the time of war. (The U.S. is not actually at War based on the requirement by the Constitution for Congress to declare it, but even if we give a pass to that pesky detail, the current military actions are against Iraq, Afghanistan and Libya, not Al-Quada and certainly not an individual.)
During World War II, the last War that Congress actually declared, millions of innocents were slaughtered by the Nazis. The Nuremberg Trials of 1945-46 showed the world (via military tribunals) that Americans put the rule of law over revenge. Other venomous leaders and despots have been tried in International Courts and Tribunals. For generations the rule of law defined civilized society.
What does it matter? If Osama bin Laden had been captured rather than killed he would have (in nearly all likelihood) been found guilty. American taxpayers would have had to foot the bill for the trial where vitriolic anti-American rhetoric would have been espoused opening deep wounds. Any punishment would be an additional cost and distraction -- certainly a Navy Seal operation was more efficient. Politically it may well prove to be a game changer in domestic politics and even in the 2012 election. It has given patriotic Americans something to cheer -- like a sporting match.

The cornerstone of our Republic has been a justice system of due process, the right to a trial of peers along with the right of appeal. This system is essential for the most vile crimes and criminals.
President Obama said "justice has been done." There is no morality or justice in killing -- no matter who does it. Americans fist pump the air reveling in the ultimate gotcha: Osama bin Laden is dead. The irony is that once again he has the better gotcha: the Nobel Peace Prize winning President violates the morality and legal principles that are at the core of American ideals and identity.
For the 2011 National Law Day President Obama proclaimed:

At the core of our Nation's values is our faith in the ideals of equality and justice under law. It is a belief embedded in our most cherished documents. " Each Law Day, we uphold our commitment to the rule of law and celebrate its protection of the freedoms we enjoy.
On this Law Day, I encourage all Americans to celebrate and reflect upon our centuries of adherence to the rule of law. In so doing, we help ensure future generations will inherit and promote the ideals that help move our Nation forward.

For more about the author:  www.craigcoogan.com

Craig Coogan is a strategist, entrepreneur and commentator who examines issues with his unique perspective.
Related Topic(s): Assassination; Congress; Freedoms; Government; Law; Murder; Politics, Add Tags
Add to My Group(s)
Go To Commenting
The views expressed herein are the sole responsibility of the author and do not necessarily reflect those of this website or its editors.