(Image by Unknown Owner)   Details   DMCA
week there are several significant religious observances and celebrations. Jewish people celebrate Passover which commemorates the freeing of ancient Israelites from slavery. Christians are on the Holy Week journey which includes Jesus' Last Supper, Death and Resurrection (Maundy Thursday, Good Friday and Easter.) 78.50% of Americans identify as Christian, 1.7% as Jewish and 16.1% are non-believers. Combined 86.9% of Americans believe in a God.
Conflicts over one person's interpretation of one's Holy Book (be it The Bible, The Torah, The Qur'an or any other) have sourced innumerable wars throughout history. Disagreement over what each Holy Book says account for both interfaith and intrafaith warring. In many parts of the world one sectarian faction fights another. In the U.S. the battles are less militaristic, but perhaps more damaging. Holy Book interpretations are used in discussions of rights for gays, women even workers. 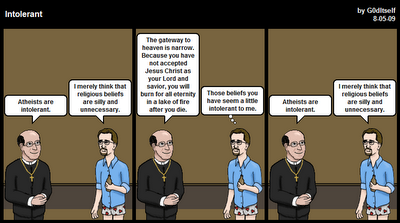 (Image by Unknown Owner)   Details   DMCA
It seems that religion is considered by many to be a synonym for morality. It's not. Morality is personal character traits that conform to a particular set of principles. Religion is a set of beliefs. Religion informs morality but isn't a substitute for it.
The damage done using religion as a weapon in the U.S. doesn't leave a carcass as in other parts of the world, but instead creates a fissure through society. God should be a unifying principle, not a tool of division. One's belief (or non-belief) in a God is perhaps the single most intimate personal things that we have.  It also distinguishes us as a species. It encompasses our philosophies and our actions on the very essence of living and dying. Personal spiritual development can benefit from guidance from a priest or rabbi or other leader but isn't dependent on it. It is the utmost of arrogance (and no small dose of hypocrisy) for anybody to think that one person has the "answer" to any religious issue let alone the hutzpah to try to impose it on another.
Every religion has an element of evangelism associated with it. Mormons come knocking on the door. Hare Krishnas still gather at some airports. Others offer bingo. Each denomination shares their faith in different ways -- nearly universally with non-threatening invitations. In its purest form evangelism relays information about a particular set of beliefs to others who do not hold those beliefs. 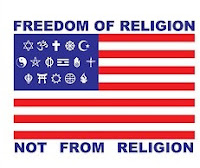 (Image by Unknown Owner)   Details   DMCA
The ability to believe and practice religion was sacrosanct to the Founders -- so much so that it is the first part of the First Amendment: "Congress shall make no law respecting an establishment of religion, or prohibiting the free exercise thereof"" It clearly states that religion is expected to be part of American society -- "of religion" not "from religion."
Even with the understanding that religion is an essential part of the human condition, the framers also put in the Constitution (Article 6, Section 3): "No religious test shall ever be required as a qualification to any office or public trust under the United States." How quaint those old idealists were!
Looking over the past thirty years -- the religion of our President's reflects how they govern.


President Bush (41) is Episcopalian which is a genial, welcoming, "let's-all-get-along-and-find-something-in-common-while-smiling-and-having-coffee-so-that there-is-no-conflict" denomination. Operation Desert Storm was in response to Iraq's invasion of Kuwait. One of the largest and most diverse group countries came together (in a very Episcopalian way) to form an effective, if limited in scope, coalition.
President Clinton is a Baptist which subscribes to a theology of salvation through faith. In personal matters Bill Clinton would repeat behavior so long as he received absolution, salvation and redemption from his wife, the public and his preacher. His pattern: sin and request forgiveness rather than change.
President Bush (43) was raised Episcopalian, became a Methodist in 1995 and was "born-again' after talking and studying with Billy Graham. 9/11 occurred as if it was an apocalyptic event the Evangelists warn of. This defined the "good versus evil" approach to foreign and domestic policy for much of his administration.
President Obama was a longtime member of the United Church of Christ and has defined himself as a Christian repeatedly. During the 2008 campaign there was much fodder about Pastor Jeremiah Wright's sermons that resulted in the Obama's resigning from that Church. Despite this according to a Pew Research poll released this week  12% of Americans still believe that Obama is a Muslim. 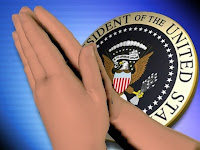 (Image by Unknown Owner)   Details   DMCA
Even if Obama was a Muslim, would it matter? Based on our constitution: no. Based on my informal analysis of Presidential actions based on personal religion, it matters a great deal. The U.S. response to Al-Queda would have been substantially different had President Bush (43) been more Episcopalian than Evangelist. The discomfort and relative ignorance that most Americans have about the Muslim faith is important in why some are vested in identifying Obama as a Muslim. Success politically is based on a leader's ability to relate and connect with the electorate. Nobody was better in 2008 than Barack Obama. The more that people are convinced that Obama is not like them (including his faith), the more likely the electorate is to look for somebody whom they can better relate to and that counts come November 2012.
The patriarchy that founded the United States set an idealized aspiration that our private beliefs remain private. Who we are as people and as leaders is defined, in part, by our beliefs and those beliefs must, therefore, be part of the discourse. Discussion is one thing, imposition another.  I prefer my evangelism to be based on my actions. If people like what they see/hear with me, get to know me and you'll learn that my religion is part of who I am and maybe you'll choose to explore what works for me on your own. I don't impose my beliefs on others. I prefer this model versus the judgment of others as they promulgate their own morality on others. Can I get an Amen?
For more blogs:  www.craigcoogan.blogspot.com
For more about the author:  www.craigcoogan.com

Craig Coogan is a strategist, entrepreneur and commentator who examines issues with his unique perspective.
Related Topic(s): Arrogance; Belief; God; Obama; People; People; Religion; Satire, Add Tags
Add to My Group(s)
Go To Commenting
The views expressed herein are the sole responsibility of the author and do not necessarily reflect those of this website or its editors.