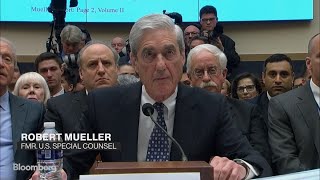 Mueller-eve, Truthseekers, what will we learn tomorrow? Virtually every news outlet characterizes Robert Mueller as a "reluctant" witness. Indeed, Mueller stressed the point in his brief 5/29 press conference that his report was his testimony, and he would not comment on any hypotheticals or decisions that weren't explicit in the report were he called to testify. We can't help but wonder why?

Why is he reluctant to speak more fully on an investigation that he came out of retirement to oversee, protected fiercely from press scrutiny and leaks, and devoted years to untangling? Unlike Ken Starr's circus show, the Mueller investigation was fruitful. So far there have been 34 indictments and counting, seven guilty pleas, five criminals sent to prison, plus three Russian businesses charged with hacking, conspiracy, and financial crimes.

But while Ken Starr gleefully took the stage to salivate over every sordid detail of Bill Clinton's extramarital kanoodling with an intern, Mueller appears willfully mute on these vastly more critical offenses to our Constitution.

Mueller seems to take the foreign assault seriously on 5/29. He concluded that "Russian intelligence officers who were part of the Russian military launched a concerted attack on our political system... they used sophisticated cyber techniques to hack into computers and networks used by the Clinton campaign. They stole private information, and then released that information through fake online identities and through the organization WikiLeaks. The releases were designed and timed to interfere with our election and to damage a presidential candidate."

And he knows the organized Russian efforts against America occurred with the knowledge and assistance of the Trump Crime Family and it's peripherals, many of whom were subsequently indicted and sent to prison. Following that our "elected" President did everything he could to obstruct the investigation into this attack.

He embraced Putin, disparaged American FBI agents who protect our country and citizens, and hurled insults at those who expressed alarm that our nation was attacked. The only possible reason an allegedly America-loving, patriotic President would work to end an investigation into a foreign attack on our country is if he had a hand in it. Even Trump knows he's complicit. As the report states, upon hearing from then AG Sessions that Mueller had been appointed, his first reaction was to slump in his chair and say "Oh my God. This is terrible. This is the end of my Presidency. I'm fucked."

Turns out, not so much. Just like the p*ssy-grabbing comments -- he is getting a pass from the GOP. If anything, they love him even more after the report than before. Doesn't matter that he picks the dictator Putin over our own Intelligence community. They are all wearing the MAGA hats now.

Imagine how bizarre it would've been if Dubya had called the 9/11 attacks a "hoax," defended Osama bin Laden and said he trusted him more than American intelligence officers, and met with al Qaeda leaders off the record. Wouldn't Republicans be a bit puzzled by that behavior? Today's GOP toadies don't seem to care that our President is in bed with the enemy. Why? They care more about protecting this insane, idiotic, racist con man than securing our democracy against certain future attacks or punishing the criminals who seek to destroy our nation.

One after another these alleged public servants have contorted themselves into human pretzels to protect The p*ssy-grabbing Don. William Barr ended his retirement to swoop in and save his ass from the full-force of the report's conclusions. Even as Trump's dangerous racist rhetoric and atrocious policies reach a new low, these so-called patriots stand by his side. They nod in tacit agreement as Trump vilifies Gold Star families, calls Mexicans rapists and murderers, bemoans shithole countries, attacks their respected and terminally ill colleague John McCain, elevates Kim Jong Crazy to Respected Leader status, shuts down the government for an imaginary "emergency," praises Putin, forgives the Saudi dismemberment of a US journalist, cages children, separates migrant families from their babies, and calls four elected Congresswomen "anti-Semites" who love al Qaeda and hate America.

Lindsay Graham went from being his harshest critic to his best BFF in the blink of an eye. Ted Cruz wanted Trump's head on a platter for the attacks on his father and wife, and now sings Trump's praises. Presumed moderate Supreme Court Justice Kennedy retired so Trump could appoint the would-be rapist Kavanaugh. Rubio, Ryan, Romney, Christie, Guiliani, Mulvaney, McCarthy, Haley, Jordan and many other "Never Trumpers" now cuddle him like their favorite teddy bear and Evangelicals treat him like the Messiah. And to a person they pretend the Russian attack didn't happen, isn't ongoing, and shouldn't be a concern in 2020.

Yet again...why? Are they ALL compromised by Russia? Is that possible?

Mueller certainly understood the gravity of the foreign attack and took pains to stress that point in his only public remarks to date: "I will close by reiterating the central allegation of our indictments -- that there were multiple, systematic efforts to interfere in our election. That allegation deserves the attention of every American." Given this statement, you would conclude that he would be very, very interested in making sure the American people had as much information as possible to guard against future hostile actions by Russia and anyone working in the United States to assist Russia, wouldn't you?

So -- why the reluctance to speak publicly before Congress? Why did it require a subpoena to compel his testimony and why did he ask AG Barr for "instructions" about what he could say so he could have cover to refuse to answer specific congressional questions about details in his own report? Why would he be "reluctant" to speak about the person who is the biggest internal threat to our nation, the un-indicted criminal Individual-1?

Kathy never expected a career in radio as a talk show producer. Born and raised in Atlanta, Georgia, Kathy was completing her nursing degree when in 2001 - in an emergency - she was asked to fill in as the producer of Mike's program. Within a few (more...)
Related Topic(s): Congress; Impeachment; Mueller Investigation; Robert Mueller; Wikileaks, Add Tags
Add to My Group(s)
Go To Commenting
The views expressed herein are the sole responsibility of the author and do not necessarily reflect those of this website or its editors.