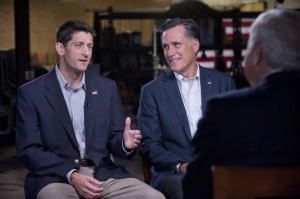 Mittens and Paulie, sitting on the "60 Minutes" set, like dark-haired, dogmatic doppelgangers separated by a generation and a dozen or so IQ points. Ready with their ultra-conservative agenda to oppress women, minorities, and aging baby boomers everywhere in their quest to return white-bread male-dominance to the White House.

They share more than a hairdo and penchant for blue blazers and checkered shirts (no tie, please); they have an equally fanatical vision of America that involves ending many of the hard-won civil rights and equalities that we fought for over the last American century; particularly where it concerns how and when women should be permitted to employ their reproductive organs.

What message was Willard sending with his selection of blue-eyed House Budget Committee Chairman Paul Ryan as "the next President of the United States[sic]?" Democracy Now has this posted about Ryan's record on women's rights:

"Ryan [a staunch Roman Catholic] opposes abortion in all situations, including cases of rape and incest, and opposes abortion in cases that endanger an expectant mother's health. [He endorses the] so-called "Personhood Amendment," which supports defining a fertilized egg as a human being. Ryan was a co-sponsor of the Sanctity of Human Life Act, which even the conservative state of Mississippi rejected last November, and is favor of de-funding Planned Parenthood."

And The Daily Beast adds this:

"Ryan vehemently opposed the Obama administration's mandate that religious-affiliated institutions provide insurance coverage for birth control, calling it a violation of 'our first amendment rights to religious freedom and conscience.' Also like Romney, Ryan has opposed federally funded family planning services, voting in 1999 to deny birth-control coverage to federal employees. During the primaries, Romney advocated eliminating Title X funding, a Nixon-era program that covers birth control and cancer screenings. Ryan has voted repeatedly against funding international family-planning programs. Ryan was a co-sponsor of the federal Sanctity of Human Life Act, a bill that declared that life begins with fertilization. The bill states that a fertilized egg should 'have all the legal and constitutional attributes and privileges of personhood.'  If it had passed, the bill also would have outlawed certain types of birth control and in vitro fertilization.

Meghan Rhoad, researcher for Human Rights Watch, said "The misnamed Protect Life Act is about allowing women to die if they need an emergency abortion. It is a vicious attack on women's rights and on the most basic right to life."    Infertile couples who look to in vitro for a much-wanted baby? Screw 'em. Forget that fancy cancer-screening, ladies.  Who needs mammograms and pap smears? The Pill? That's just abortion-in-a-bottle. The HPV vaccine to prevent cervical cancer? Fughetabout it. And if you're raped, become pregnant -- with complications -- and will die if you carry the baby to term? Get ready for your Last Rites because Ryan is on record for just letting you die.

Even Ayn Rand would wince at that one.

But Ryan doesn't reserve his disdain for women, Ryan's proposed "reforms" include a heartless crackdown on immigrants, a blueprint for dismantling Medicaid, and he has made a mantra out of repealing Obama's Affordable Care Act.

He's not exactly winning the Latino vote by voting against the DREAM Act -- a path to citizenship for the children of illegal immigrants, which was a considerable Obama victory in 2010. "I understand the points that DREAM Act supporters have raised," he says, but adds that "it would be a serious mistake to pursue piecemeal reforms like the DREAM Act without first putting in place these fundamental components of immigration reform."

He also voted in favor of the medieval "Sensenbrenner bill" in 2005, which would have turned undocumented workers into felons. Oh, and if you aided an undocumented worker, you were a felon, too, and subject to serious prison time. Even if you were that person's pastor or priest. This marries nicely with Romney's infamous "self-deportation" plan of making America so inhospitable to immigrants they'd just leave. Poof! Disappear.

With the Doublespeak Twins' stances on women and immigrants, Lady Liberty might as well lower her torch, snap on a chastity belt and paddle to the nearest kitchen.

Ryan is unflappable on Medicare. His bulls-eye to blast was carefully detailed in his Orwellian-titled "Prosperity for America Plan," released this Spring. Medicare, while not officially "ended," would be turned over to the states to manage on their own -- or dispose of entirely. In place of our current taxpayer-supported federally-funded safety net, seniors would pick an insurance plan of their choosing (this is the wonderful "choice" part of the double-R plan) then the government would deposit periodic small stipends (aka vouchers) directly into their chosen plan to "supplement" the out-of-pocket expenses they were expected to pay out of their personal (but mandated) health savings accounts. There is no limit of out-of-pocket costs incurred by seniors, and the plan doesn't allow for any payment for prescription drugs.

Now somebody grab the nearest Teabaggers and ask them how they like the idea of government forcing them to take their own money and deposit it into government-controlled bank accounts? They'd march out in their tin-soldier uniforms with soggy teabags-a-flying if Obama suggested something like that, and you know it. Lots of older Americans had this already, on both sides of the aisle. And guess what? They vote.

Oh boy, do they know how to vote. The threat that Obama was going to meddle with Medicare drove them to the polls in 2010 and ushered in the new Republican majority that allowed ol' Blue Eyes to become Budget Committee Chairman in the House. Funny how the circle closes, isn't it?

Trying to smother the smoldering tinder before it ignites into a raging inferno, the alliterative RR team turned on the charm during their CBS interview and claimed that the Democrats were putting a bad spin on their Medicare proposals. They don't want to end or dismantle Medicare, they just want to give people a choice ... Like the choice of whether to buy their blood pressure medicine or pay their light bills.

Momma, you didn't raise your boy right. He's got no respect for his elders, or those in society who don't look just like him.

Kathy never expected a career in radio as a talk show producer. Born and raised in Atlanta, Georgia, Kathy was completing her nursing degree when in 2001 - in an emergency - she was asked to fill in as the producer of Mike's program. Within a few (more...)
Related Topic(s): Abortion; Health; Medicare; Republican; Rights; Romney-ryan; Women, Add Tags
Add to My Group(s)
Go To Commenting
The views expressed herein are the sole responsibility of the author and do not necessarily reflect those of this website or its editors.