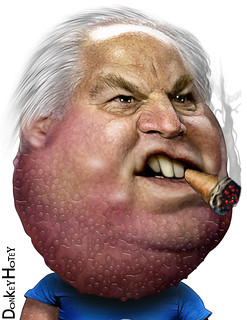 Rush Limbaugh - Caricature
(Image by DonkeyHotey)   Details   DMCA
th those words, Pope Francis ended his powerful address this morning. He arrived at the White House in typical humble fashion, riding in a Fiat with the window down. Earlier he was greeted exuberantly by crowds of mostly young people when he left his temporary residence this morning. Even the most jaded pundits were a little awestruck.

But that didn't stop el Rushbo from using the historic visit to drag down the Democrats and President Obama. Rush stretched the limits of credibility by pointing out the hypocrisy at embracing this Pope because of his liberal stances on capitalism and environmental protection while despising the Bible. This is from the transcript at Rush's website...

"Here you have the avowed leader of the American Democrat Party, and maybe the worldwide left, which has made its bones in part on its utter despisal of religion. Liberalism exists as a counter to religion, particularly Christianity, not just Catholicism, but Christianity in general.

"The American left abhors these aspects of organized religion. They don't want anything that they engage in, no matter what it is, ever proclaimed as wrong or immoral, and the things that they advocate are I think, in part, not because they really believe them, but because they're so excited about the in-your-face nature of, for example, gay marriage.

"I think the thing they really love about gay marriage is how they get to ram it down the throats of the Christians. That's what I think, how they just get to smack 'em upside the head, gay marriage, supporting LGBT, normalizing this and that. I think it's a direct assault on organized religion.

"And yet, given all of that, who are they embracing this week? They're embracing a man known as the vicar of you Christ, who, as far as anybody else knows or is concerned, believes in all of this stuff they despise. I mean, these are the people that make sure every possible abortion takes place. These are the people that make sure that if a woman is walking anywhere near an abortion clinic and she's pregnant and there's an adoption center right next door, they got people out making sure she does not go to the adoption center."

Hey Rush, you want some irony? This Pope would even embrace and forgive you.

Kathy never expected a career in radio as a talk show producer. Born and raised in Atlanta, Georgia, Kathy was completing her nursing degree when in 2001 - in an emergency - she was asked to fill in as the producer of Mike's program. Within a few (more...)
Related Topic(s): Religion; Rush Limbaugh, Add Tags
Add to My Group(s)
Go To Commenting
The views expressed herein are the sole responsibility of the author and do not necessarily reflect those of this website or its editors.