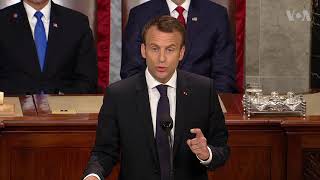 How refreshing to watch a literate, intelligent, healthy, articulate world leader take the stage. I'm so jealous of France right now, they have Macron and we have The Don. Not fair.

That was a heck of a subtle smackdown of the US President by the French President, as Politico reports:

"'We can choose isolationism, withdrawal and nationalism. This is an option. It can be tempting to us as a temporary remedy to our fears,' Macron said, while barely mentioning the voluble president's name. 'But closing the door to the world will not stop the evolution of the world. It will not douse but inflame the fears of our citizens.'

"Speaking in English, the 40-year-old Macron hailed two of Obama's signature achievements -- the Paris climate change agreement and the Iran nuclear deal -- and urged the U.S. to rejoin the former and preserve the latter. He also urged against trade barriers and called for reinvigorated American leadership in what he called a '21st century world order.'

Acting out of "extreme nationalism," Macron said, will only serve to weaken international institutions such as the United Nations and NATO and erode their "mandate and stabilizing influence" around the globe.

"He also warned against incendiary political rhetoric, seeming to echo a frequent criticism of Trump. 'You can play with fears and angers for a time, but they do not construct anything. Anger only freezes and weakens us,' Macron said.

"And he lamented threat to democracy of 'the ever-growing virus of fake news, which exposes our people to irrational fear and imaginary risks.'

"Macron conceded that the Iran nuclear deal is flawed -- but argued that it has kept a lid on Iran's nuclear program and warned against abandoning it.

"And he said he was sure that the U.S. would one day rejoin the landmark international climate-change agreement reached in Paris in 2015, a deal that Trump has abandoned.

"'I believe in building a better future for our children, which requires offering them a planet that is still habitable in 25 years,' Macron said. 'Because what is the meaning of our life, really, if we work and live destroying the planet while sacrificing the future of our children?'

"'I believe that against ignorance we have education. Against inequalities, development. Against cynicism, trust and good faith. Against fanaticism, culture. Against disease and epidemics, medicine. Against the threats on the planet, science,' he said. At one point, he stressed: 'Let us face it: There is no Planet B.'"

Kathy never expected a career in radio as a talk show producer. Born and raised in Atlanta, Georgia, Kathy was completing her nursing degree when in 2001 - in an emergency - she was asked to fill in as the producer of Mike's program. Within a few (more...)
Related Topic(s): Congress; French President Macron; Rhetoric, Add Tags
Add to My Group(s)
Go To Commenting
The views expressed herein are the sole responsibility of the author and do not necessarily reflect those of this website or its editors.