At the end of August (2017) I published a column that focused primarily on the four-way Presidential election of 1860, while presenting it as a forerunner of what may well be seen in the U.S. election of 2020. This was about two weeks after Steve Bannon had been "fired" from the White House staff. I put "fired" in quotes because at the time I saw this as the beginning of a set-up for things to come. (No less a reactionary than Robert Kagan seems to agree with me.) I suggested at the time that as things got tighter and tighter for Trump in the various investigations that, waiting as long as he could, but surely before the trap or traps was/were sprung, after granting pardons far and wide, including to himself, he would resign from the Presidency. (Trump likely has one or more spies within each of the bodies investigating him, and thus has a very good idea of how far along they are.) He would then immediately set up a new Far-Right party, with himself as, let us say, The Leader, and Bannon as his Consigliere AND Underboss.

Trump's Party would be to the Right even of the present pretty-far-Right Republican Party, the product of the next stage of the Right-Wing Imperative which has governed Republican politics since the 1960s. As of this date (Oct. 12, 2017 --- interestingly enough, the real Columbus Day), one cannot be certain that this is what will happen. BUT, very briefly here, consider the following. Bannon backed a far-rightist (even in the Repub. sense) in the Alabama Repub. Senate primary, seemingly against Trump's candidate of choice. But in his speeches Bannon was sure to say that "Judge" Moore was really the Trumpite (although Bannon did not use that term) in the race. Trump allowed that Moore would be OK with him too.

And now, separating themselves from the Bannon/Trumpites, the Republican "establishment" in the Senate is beginning to turn against Trump: see Bob Corker and Ben Sasse. (Ironically it happens that Corker was elected to the Senate for the first time in Tennessee very likely because at the last minute he ran an openly racist ad against his Democratic opponent, Harold Ford, Jr. Until that time, Ford had been ahead. The DLC-Democrat Ford declined to challenge Corker's racism, lost the election, and in recent years has spent a lot of time on MSNBC's "Morning Joe.")

Bannon has now declared that he will be running primary opponents (or trying to at least) against every sitting Repub. Senator, other than Ted Cruz. Why not Cruz? Because Bannon (and Kelly Anne Conway) was an integral part of Cruz' staff before he dropped out of the race for the Repub. nomination. When he came over to Trump he brought Cruz' Mercer Money with him. And it is Mercer money which is now at the center of Bannon's new initiative. So what is happening, very quickly? Might not Bannon's prediction that Trump would have only a 30% chance of finishing his term, rather than resigning being removed from office under the provisions of the 25th Amendment, play into all of this, with Trump resigning under pressure first?

In my view, it is the formation of a new Far-Right party, of which Trump would become The Leader, of course after he resigns the Presidency, which must be of great concern. (And of course the premier announcement of the formation of the new party would be made by Trump on the Sean Hannity show.) This Party, while not at the beginning openly fascist, will certainly ride on the wings of authoritarianism. Trump's close affinity for authoritarianism is currently symbolized by his call for an end to freedom of the press. (Historically , in many countries the drive to the establishment of an authoritarian regime began with attacks on the press and the independent judiciary.) Trump will be presenting himself to his hardcore racist, xenophobic, homophobic, Islamophobic, and possibly openly anti-Semitic base as the Leader who can "get things done," once he is rid of all those inconveniences like the Congress and the independent judiciary.

Which brings us (or at least it brings me) to THE Prince of Wales.

There have been many Princes of Wales in British history, because it is the title that for centuries has been given to the (male) heir to the throne. But thePrince of Wales (and I did pick the Encyclopedia Britannica for this reference), who held parts of the world in thrall in the period between World Wars I & II, was special. Because before he could be crowned King after the death of his father George V, he abdicated (that is resigned) his position. Which of course brings us to Donald Trump. Not an exact parallel, but close enough. 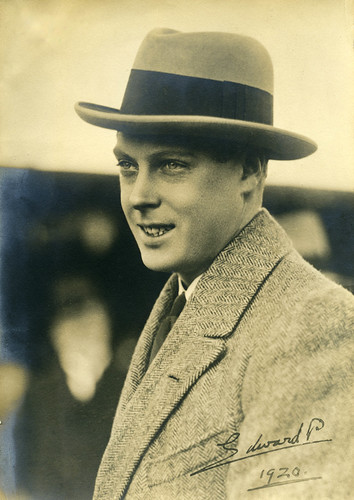 Prince Edward was a Rightist. Prince Edward was an open admirer of Nazi Germany and Adolf Hitler. Prince Edward had an authoritarian streak and flirted at times with ignoring/bypassing the British Constitution, which, although unwritten, and controls by "tradition" and "understandings," has had a powerful impact on British life for centuries. Hitler openly admired the Prince as well. There has been speculation, from the late 1930s onwards, that if Germany had defeated Great Britain and occupied the British Isles, Edward might have been prevailed upon to play some role in Nazi/British government with, of course, Parliament and the British judiciary discarded. And so, on to the story of the Prince of Wales (later the Duke of Windsor), most especially the political aspects of it.

When I was growing up in the 1940's and 50's Edward, the former Prince of Wales and the former Edward VIII (for most of 1936 --- the year I was born --- but never crowned), then holding the honorific title of the Duke of Windsor, although he was quite alive was an almost legendary character. Born in 1894, he was a great grandson of Great Britain's Queen Victoria, a grandson of the also legendary King Edward VII (legendary as himself a one-time Prince of Wales for his exploits with members of the opposite sex before he became king, a role that the Duke would assume some years later when he became Prince of Wales), and son of a very distant father, George V. He became the Prince of Wales when his father became king in 1911. Since his father's reign lasted for over 25 years, this Edward was the Prince of Wales for quite some time.

He became quite famous. In the Army during World War I, although never allowed to get too close to the front lines, he did see some action in France, and certainly made sure that he was seen, in photographs, in his Army uniform. After the war, he was the first British royal to travel widely, both around the Empire/Commonwealth as well as in the United States and South America. And he loved the limelight, getting photographed and getting written up in various newspapers and magazines all over the world, for many years. There were pin-ups, cigarette cards, and men imitated his dress and his tie-knot. As noted, he was also known as a womanizer, although he didn't marry until the time came to do it. But when he announced his intention to do so, to a U.S. divorcee who was still married to her second husband at the time, he rocked the Empire.

But of more interest to this columnist and our readership are the Prince's political views. It is to that subject that we shall turn in Part 2 of this short series.

For the history of the "Prince of Wales/Duke of Windsor" era, although I knew some of it from a variety of sources (including some from my childhood when after the War, the "Duke and Duchess," living in exile in France, were a recurring item in the media of the time), I am much indebted to a marvelous book: 17 Carnations by Andrew Morton (Grand Central Publishing/Hachette, 2015, trade paperback edition, 2016). The title of the book refers to the 17 carnations that Nazi Ambassador to Great Britain von Ribbentrop apparently sent regularly to Wallis Simpson to commemorate the number of times they had been to bed together (while she was also beginning her relationship with the Prince of Wales).

Steven Jonas, MD, MPH, MS is a Professor Emeritus of Preventive Medicine at StonyBrookMedicine (NY) and author/co-author/editor/co-editor of over 35 books. In addition to his position on OpEdNews as a "Trusted Author," he is a Senior Editor, (more...)
Related Topic(s): Donald Trump; Donald Trump Versus The Constitution; Hitler; Pardons; Parliament; Politics; Racism; Republican; Steve Bannon; Trump Attacks Media; (more...) Trump Pardons; Trump Presidency; Trumpism, Add Tags  (less...)
Add to My Group(s)
Go To Commenting
The views expressed herein are the sole responsibility of the author and do not necessarily reflect those of this website or its editors.