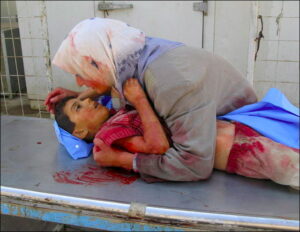 Saturday marks the 8th anniversary of The Bush Crime Family's illegal invasion of Iraq. As Mike is traveling to DC tomorrow to protest the continued slaughter and occupation of that ravaged nation -- along with the futility of our war in Afghanistan -- tonight we will commemorate that hideous day in America's recent history with our annual playing of the "shock and awe" audio from the night of March 19th, 2003.

Hard to believe it has been eight years since we watched and listened in horror as the US carpet-bombed the citizens of a nation that had done nothing to us, and witnessed the flood-tide of blood and death in the pretense of "freedom and liberation." What was the reason? Why did we participate in the war crimes and crimes against humanity that was the foundation of Bush's invasion?

You that never done nothin'/ But build to destroy
You play with my world/ Like it's your little toy
You put a gun in my hand/ And you hide from my eyes
And you turn and run farther/ When the fast bullets fly.

Was it worth it, gentle readers?  What did we receive in return for the billions upon billions our now near-bankrupt and indebted nation spent -- or allowed to be stolen outright -- for Cheney's misadventures in the Mideast? What kind of country would we be living in today had that money been spent on good rather than evil, on construction rather than destruction, on making life better instead of making people dead?

You fasten all the triggers/ For the others to fire
Then you set back and watch/ When the death count gets higher
You hide in your mansion'/ As young people's blood
Flows out of their bodies/ And is buried in the mud.

Thousands of dead Iraqis and Americans later (with tens of thousands maimed and crippled, physically and psychologically) that brutalized nation still is mired in chaos. What was the point? Was all this sacrifice from the common folk of two countries simply and insanely about profit, war profiteering and power for the elite few in this country who are slowly killing us all?

Let me ask you one question/ Is your money that good
Will it buy you forgiveness/ Do you think that it could
I think you will find/ When your death takes its toll
All the money you made/ Will never buy back your soul.

Can they spend it in hell?

Kathy never expected a career in radio as a talk show producer. Born and raised in Atlanta, Georgia, Kathy was completing her nursing degree when in 2001 - in an emergency - she was asked to fill in as the producer of Mike's program. Within a few (more...)
Related Topic(s): Death; Foreign Policy Failure Iraq; Invasion; Iraq Massacres; Military Iraq Casualities; Power; Slaughter, Add Tags
Add to My Group(s)
Go To Commenting
The views expressed herein are the sole responsibility of the author and do not necessarily reflect those of this website or its editors.