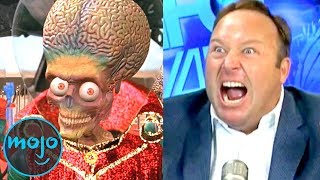 If modern day America possesses a unique, unequaled talent for something, it would have to be our nation's penchant for taking something deeply meaningful, substantively valuable and of vital importance to society and reducing it to a shallow, cheap reflection of its original, spray paint it gold and mass produce it in the most lazy and profitable way possible.

We do this with everything. Religion. Science. Social issues. All reduced from their true complex, nuanced originals into a grossly inadequate if amusing form easily depicted as a meme. Ah the meme. The great American currency of thought. Not surprising for a culture who replaced the value of education with YouTube starts and pop culture. But I digress.


One of the most underappreciated victims of our reductionist culture has been the degradation of the "conspiracy theorist". It's easy to see how the vulgar remaking of Christianity has destroyed religion in America - how the sweaty, screaming televangelists of the 80s, shamed by various scandals, gave way to the more recent incarnation of the "prosperity preachers". Those who took the sacred lessons of empathy, humility and forgiveness taught by Jesus and revamped them into a get rich quick schemes for themselves.

In spite of being pure heresy, it all went very smoothly. Gutting all moral value from the scriptures and teaching their flock to participate in a pseudo religion of chain letter donations, instructing them to use "sacred chewing gum" to heal themselves, to bury money in their backyards while recanting a "prayer" and of course mailing in "seed money" to the preacher so that God will in turn bless them with riches - was a piece of cake. Who wants to fuss over details right? This new brand of spiritual hocus pocus was a lot more entertaining and requires so much less thought and certainly much less ethical or moral rigor.

It's easy to see how our economy, once built on the concepts of innovation, hard work and producing a quality product worthy of our hard earned dollars has been reduced to an endless scheme "growing wealth" by creating new "financial products". These schemes, works of financial manipulation and trickery, serve to make "entrepreneurs" and "venture capitalists" rich, while leaving the industrious, hard working American at a loss to find meaningful work, decent wages or well made goods. The fraudsters like Maddoff and all those working on the next ponzi scheme or stock market bubble to raid the investments of the struggling working class are all of the same ilk. These men, who, like the tv preacher, market themselves with glitzy presentations and bravado, donning their expensive suits and like alpha male sharks - lure the disenfranchised and gullible, eager to get rich quick without so much effort, into believing in their scams. These men have come to symbolize success in a way that its really no surprise that Trump became the President. Its all entertainment and show, no substance.

Of course, the destruction of religion, middle class values, work ethic and pride in the goods we produce is a great harm - the more visible disintegration of America's substance into cheap, mass produced trinkets. But the harm caused by the reinvention of critical thinking, is a much less quantifiable loss, so I want to illuminate it, if I can.

There have always been those who are corrupt and those who seek to expose and unseat the corrupt. The press, although many times serving as a propaganda machine for the powerful elite, has also been a powerful weapon to unmask the charades and abuses of the "untouchable". From time to time, courageous journalists have uncovered a scandal, given voice to a victim, and brought low that figure so powerful that politicians were either bought off or too afraid to confront. But as the 1% gained an unfathomable level of wealth, and control over the political establishment, and began to buy up the press - the chance of the truth coming out started to resemble Indiana Jones escape from the temple of doom. One booby trap after another, each possibly fatal, having to be overcome and then the truth, narrowly sliding under the descending stone of coverup, by only a few harrowing inches, may make the light of day.

Journalism under these treacherous circumstances became more cloak and dagger. You never knew who was working for the powers that be. Even if you got explosive information, who could you trust to give it to who wouldn't try to bury it? And with so many "journalists" working for those in power who were covering up the truth, how do you know which "journalists" to trust? With the press and government burying so much information, often replacing it with their own "official" narrative, a new creature emerged. A creature who doggedly pursued the truth, who refused to be bought out or threatened, who would not be intimidated into capitulation when facts did not support the "official" story - the "conspiracy theorist" was born.

"Conspiracy theorists" of course was not the term they gave themselves, but was an invention of those wanting to suppress the truth that these critical thinkers were bringing to light. The truth is extremely powerful. Once people have seen evidence that convinces them that they now know the truth, the only thing that can sway them is evidence which counters the first evidence and is more convincing. And if you are a government bent on putting forth a false narrative the last thing you need is a group of people critically examining your narrative vs the physical evidence and pointing out publicly that there are a lot of things that don't make sense.

Related Topic(s): Alex Jones; Conspiracy; Conspiracy Theories; Critical Thinking; NWO; Trump, Add Tags
Add to My Group(s)
Go To Commenting
The views expressed herein are the sole responsibility of the author and do not necessarily reflect those of this website or its editors.