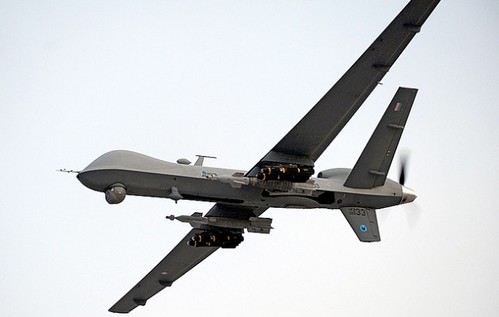 An amazing if not disgusting piece of pro war propaganda invaded the television this morning from no less than CBS this morning. It is widely known that mainstream media is the military industrial complex 24 hour consent manufacturing machine and they are obligated to pull out the pom poms at the behest of warmongers like Bolton and Pompeo at a moment's notice. But the horrifying display I witnessed this morning, a public service ad for how comfortable we have made war was beyond anything in its level of obnoxious self serving praise I had ever seen before.

The segment showed US drones which fly over foreign lands around the globe, spreading fear and destruction and all to often, murdering civilians as it ostensibly fights the unending and nebulous "war on terror". If my terminology offends you I will offer as a defense that the drone, which the military prefers to be called a "remote controlled aircraft" is named "The Reaper". Yes. The drone is named after that feared bringer of death. But unlike the original, the tall robed figure who is pictured with a scythe, an instrument which implies the up close and personal taking of a soul, this technological marvel allows the bringing of death from thousands of miles away from Creech Air Force Base in Nevada.

The CTM reporter, Janet Shamlian who interviewed the "pilots" of these drones showed the "cockpit" where they remotely fly and control the drones, which Shamlian called the "all stars" in the war on terror. A quick walk around the outside of the "cockpit" shows what looks like a steel shipping container. Shamlian walks toward the camera as it pans out, explaining with an almost excited tone that "this is a base at war every day". To those not brought up in our war loving culture, this would seem unbelievably bizarre. That a woman reporter, dressed like a soccer mom, would exclaim with a such a positive tone that our country is literally at war every day, waging war in far away lands from the comfort of home. She extols this fact with such pride, as if she is reporting on a facility making life saving medicines round the clock.

Inside the "cockpit", video screens line the air conditioned room displaying images transmitted back from the warzone. Today's demonstration was allegedly a simulation for pilots in training but it didn't make the concept any less chilling. On one of the screens, a white sedan travels down an unpaved road in a far off land, momentarily caught in the cross hairs as the pilots casually discuss how effective they can neutralize their targets. Shamlian says, "600 pilots and 350 camera operators work in teams around the clock averaging 6 airstrikes and 1000 combat hours every day." A female "pilot" says, "The act of taking a human life, the act of supporting guys on the ground is as stressful as it was being in an F-16 regardless of the distance" Shamlain then introduces Major Brice as a "combatant in the sky" 8 hours a day. With amazing ease she combines the office like nature of these "warriors" with the acts of routine destruction. Brice nonchalantly adds, "So even like right now, we could turn the laser on, I could turn in and we could fire another missile."

The statements are so incongruous that there can only be one of two options here, that these armchair warriors actually believe they have just as firm a grasp on the horrors of war in spite of the office cubicle front line from whence they wage their video game like war, or they are just lying. I believe that in their minds they have been so conditioned that they do believe they are somehow part of a "good" war. Shamlain reinforces this by mentioning that Brice and other "warriors" routinely drop Hellfire Missiles or precision guided bombs on high value targets"

Brice adds that getting to go home to his daughter and wife at the end of each day makes him a better pilot. I thought of this and the statement of the female pilot who said "the weight of taking a life" is just as great as it is flying over in an actual plane. But how could it be?

My mind reeled at the horror of this notion. Do they really believe what they are saying? Has the level of disconnect in our war machine, in our society, become so egregious that it sounds plausible that individuals who are absolutely safe and removed from danger, who experience no physical discomfort, who do not experience fear, hunger, or exhaustion, who return to the comfort of their homes and their children every night, could have the most remote idea what it is like to live in a country terrorized by the drones they fly? It takes the phrase "War is Hell" and makes it into an asymmetrical reality. War is hell - for some.

Then I recalled a lecture given by historian Howard Zinn at Marlboro College, Feb 16, 2004 which I had recently watched on YouTube. https://www.youtube.com/watch?v=UAAJ3CdqV0A . He spoke of joining the Air Force and becoming a "bombardier" He described his experiences of going to the briefings before the air raids and being given "intelligence reports" of the intended targets. He recounted how he flew over cities and dropped bombs, returned to celebrate his "successful missions" and never gave a thought to what he was bombing. He said that years later he was in Japan and was at a commemoration ceremony of the dropping of the bomb on Hiroshima and Nagasaki and he was asked to say something to all the Japanese survivors who were gathered there. He said he looked out at the room, at the people, missing arms and legs, scars on their skin and realized that the bombs he dropped brought similar injury and carnage and was unable to speak. Zinn attributed this disconnect to proper conditioning of the mind, and that the military was an expert at this.

At the end of the report, the CBS this morning crew in their clean, brightly lit studio, their pressed suits and dresses gave exuberant praise to the "warriors". Tony Dokoupil, who is the member of the cast who most often mentions recently becoming a father, and often adds personal commentary on issues as the father of a new baby, says, "You hear that guy saying good-bye to his daughter, and then he steps into that cockpit they have in the desert and he's at war. I mean the space between your bed at home and a war zone is (snaps his fingers) is like that." I was almost sickened by the inverted use of his words. I yelled at the TV, "That's not a war zone!"

Sadly there are people, children like those in Syria and Yemen whose beds, in their homes, are actually in a war zone. The arrogance and false equivocation was too much. That we can extol 9-5 "warriors" who battle in comfort and go home to their families at the end of their workday, while hospitals in actual war zones are swamped with victims, many of them innocent children and the elderly, products of the wars we wage with dispassionate efficiency and grossly over glorified slogans.

As Zinn's experience shows, being in an actual plane doesn't necessarily bring the reality home to the soldier of what he is doing, but there may be at least the deterrent for his own personal safety which might also give rise to empathy for the fear experienced by those whom he is attacking.

The next host Vladimier Duthiers then launches into a bizarre expression of amazement about how "young" our soldiers are, gushing about how talented they are and how good at their "jobs", saying that many of them are just in their twenties. At first this made no sense because the female officer in the segment they showed was obviously not young and Major Brice and the other man in the "cockpit" who did not speak were younger than the female officer, but again, did not appear exceptionally young. Dokoupil adds, "Yeah. Difficult. War." Gayle Kings adds, "I'd much rather see a young person who knows what they are doing than, you know, someone who is of advanced age having that.." This part of the conversation was still unclear to me in its messaging, but it was so forced and ridiculous of an assertion that I thought it has to be part of the agenda that is being constructed. Then I thought of another report I had heard on CBS earlier in March and I began to get the message.

Tony Dokoupils did a report on the U.S. Army's on March 28, 2019 in which he interviews an Army recruiter on the military's latest effort: to recruit "gamers" who they hope to turn from virtual soldiers to real life warriors. (https://www.cbsnews.com/news/army-turns-to-video-game-conventions-for-new-recruits/ )

The piece was just as shocking and frightening as the drone report. The segment markets the concept as merely being a new method to draw in different groups after the army failed to meet its recruitment goals for the first time since 2005. However, the first question DoKoupil asked of the recruiter is "What skills do gamers have that you are looking for?" The recruiter answers, " the ability to take in a lot of information and to make a decision quickly." What that translates to in civilian language is, to be trained to respond to a situation through repetitive drills and without engaging in active thought processing. This is what Zinn described. You are told over and over again that successful missions mean "neutralizing your targets". Also, "the targets are who we tell you they are".