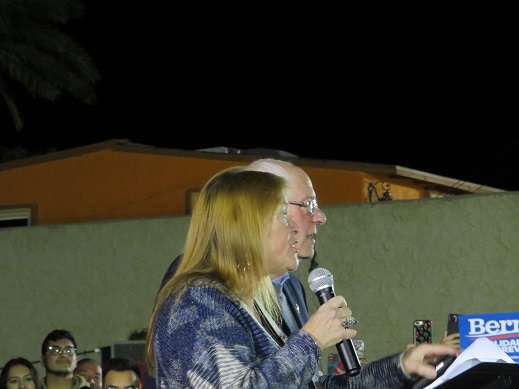 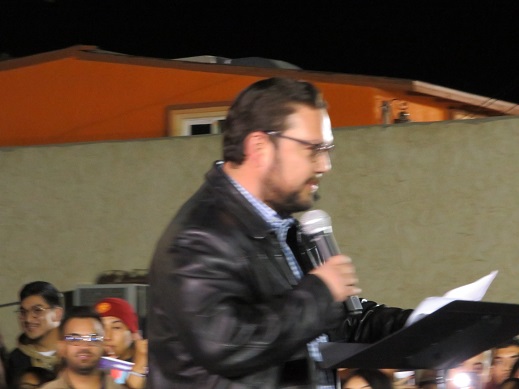 Many arrived at the new headquarters early as they were eager to get a glimpse of the real frontrunner for President of the United States. Bernie addressed many issues but the three that drew the biggest applause were ending the wars, Medicare for All and ending the prison industrial complex. 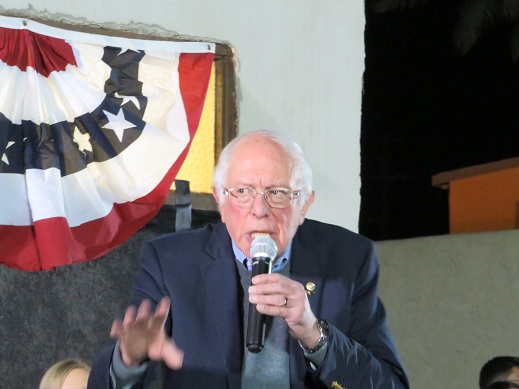 Audience members indicated that stopping the wars was high on their list of priorities. Bernie's visit to California came on the heels of Wikileaks reporting that the U.N. faked a report that a United Nations Agency had faked the Duma gas attack, falsely blaming Bashar al Assad. The Wikileaks report proved that Dennis Kucinich and Tulsi Gabbard were fair and correct in speaking with both sides of the conflict in Syria. This also came on the heels of a Washington Pos t Report that Americans had been lied to for eighteen years about how well the war in Afghanistan was going. It was an unwinnable war from the start. 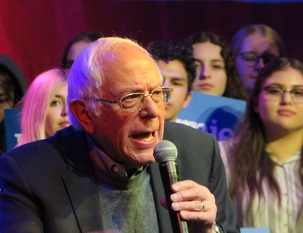 Following the opening of his Coachella office, Bernie attended a rally at the Rancho Mirage Amphitheater, also in Coachella Valley. The amphitheater seated a thousand people and four hundred were estimated to be standing in the overflow section. Many of those who made it inside had to stand as well. Nearby parking filled up an hour before the event and some people walked a mile to see their hero. Nina Turner introduced Bernie at the rally. Again, the biggest audience cheers were in connection with Bernie's remarks about health care for all, ending private prisons, ending the prison industrial complex and ending the wars.

The audience was so enthralled by Bernie's speech that almost nobody but the staff noticed that a woman in the audience went into cardiac arrest shortly after the speech started. The staff quickly got paramedics to the scene who worked on the woman as Bernie continued to speak. Most in the audience did not notice the paramedics either. Bernie was very captivating. Not long after Bernie finished, the woman had recovered enough to be taken to the local hospital.

With Tulsi Gabbard taking the moral lead in declaring that she would be boycotting the sixth debate, the other candidates all followed with an ultimatum that they would not cross the picket line. All the candidates signed a letter expressing their concerns about the questionable debate criteria and encouraging the DNC to open up the debates. Currently, none of the candidates of color (except for Andrew Yang) will be in the sixth debate. Tulsi Gabbard, the only woman of color running for President in the Democratic Party, called for transparency.

Part of the concerns involves the use of small polls with large margins of error while the DNC refuses to acknowledge larger polls from major sources with much smaller margins of error. In some polls, nobody under the age of 50 has been included in the results. This may explain why, when no candidate can come close to matching the crowds Bernie pulls in, the majority of DNC-approved polls do not reflect that reality.

Henry has been a professor of political science and legal ethics and an advisor to many successful candidates for public office. He is currently working on a book about the inequality crisis in America.
Related Topic(s): Bernie Or Bust; Bernie Sanders; Bernie Sanders 2016 Presidential Candidate; Bernie Sanders Endorsements; Bernie Sanders Foreign Policy; Coachella Valley; Debate; Medicare; Prison Industrial Comlex; Private Prisons; (more...) Syria; Wars, Add Tags  (less...)
Add to My Group(s)
Go To Commenting
The views expressed herein are the sole responsibility of the author and do not necessarily reflect those of this website or its editors.