Anti-war heroes and Hollywood stars,Blase's and other peace activists attended a memorial in honor of peace icon Blase Bonpane, remembering him as a peace hero and a role model for others to follow. 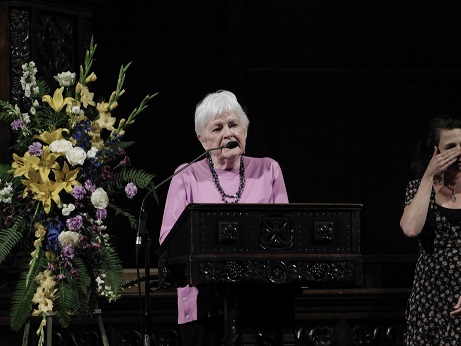 "I believe that we may have to go to the streets again in this country in great numbers," Vietnam War vet Ron Kovic said. "It really doesn't matter how old or how young you are, whether you're are in a wheelchair or whether you're walking with that cane as Blase did... That day and those days are coming up ahead, regardless of how tired you might be. We've been there before. We've marched and we've demonstrated. We're going to have to do it again and we're going to have to bring the young people with us, students with us, great numbers of people""

Though paralyzed in Vietnam, Ron came back to the U.S. and demonstrated against the war, feeling that was the patriotic thing to do. The movie, Born on the Fourth of July was written by Ron and based on his experience. Oliver Stone brought it to the screen with Tom Cruise playing the lead role. Ron has actively spoken on behalf of peace candidates, such as Congressman Dennis Kucinich. He has often spoken at anti-war demonstrations.

This sentiment was echoed throughout the speeches, along with the love of the speakers for Blase Bonpane. Blase spent a great many nights in jail as a result of standing up for peace and against the injustices done by our government. Blase's wife Theresa also went to jail a number of times for her exercise of free speech. Many in the packed auditorium had been arrested in peace demonstrations along with Blase and Theresa. One thing every attendee knew or learned was that Blase had saved lives through his work. 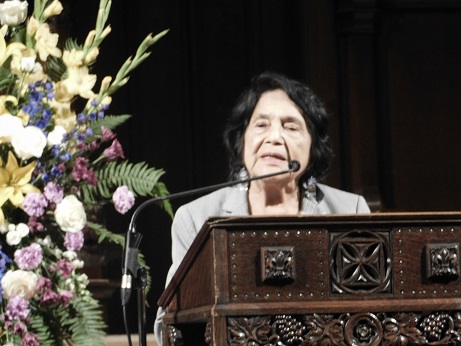 Civil rights leaders, such as Reverend James Lawson , Delores Huerta and Martin Sheen spoke at the memorial, along with a host of other civil rights activists. Jackson Browne, who had also been close to Blase, performed a couple of songs. Mimi Kennedy introduced some of the speakers and read a statement from Jim Lafferty of the National Lawyers Guild. 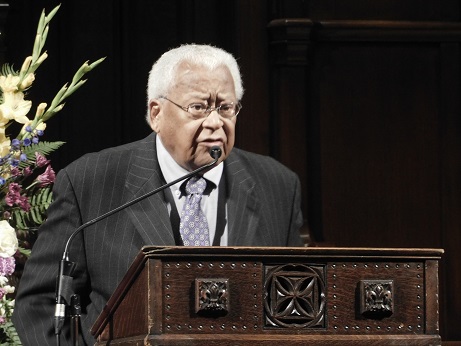 There were lots of stars in the audience, such as Jane Fonda (who brought her little dog) and Mike Farrell, the founder and President of Death Penalty Focus. That organization just had a big win with Gavin Newsom's suspension of the death penalty in California.

Though there were people of all ages as well as some service dogs in the audience, most of those present were above 70. Some were ready to march and some seemed very tired and disillusioned by the war agenda of the USA and especially by the war agenda of the Democratic Party. (Most came from the Democratic Party.) Tulsi Gabbard and Bernie Sanders were seen as the only two peace candidates running for President this year.

The question this raises is where are the Blase Bonpanes of today? Those who have the most to lose are the younger generation? What will it take for the youth to rise up as prior generations did against war? When World War III arrives it will be too late.

Henry has been a professor of political science and legal ethics and an advisor to many successful candidates for public office. He is currently working on a book about the inequality crisis in America.
Related Topic(s): Activism Anti-War; Antiwar Movement; Blase Bonpane; Office Of The Americas; Peace_War; Ron Kovic, Add Tags
Add to My Group(s)
Go To Commenting
The views expressed herein are the sole responsibility of the author and do not necessarily reflect those of this website or its editors.