Click Here to Remove All Ads
Source: The Guardian
The Obama DOJ says it intends to question the Boston bombing suspect "extensively" without first Mirandizing him 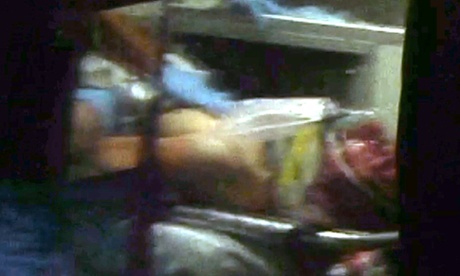 Shortly before Dzhokhar Tsarnaev, an American citizen, was apprehended last night, GOP Sen. Lindsey Graham advocated on Twitter that the Boston Marathon bombing suspect be denied what most Americans think of as basic rights. "If captured," Graham wrote, I hope [the] Administration will at least consider holding the Boston suspect as [an] enemy combatant for intelligence gathering purposes." Arguing that "if the Boston suspect has ties to overseas terror organizations he could be treasure trove of information." Graham concluded: "The last thing we may want to do is read Boston suspect Miranda Rights telling him to 'remain silent.'"

Once Tsarnaev was arrested, President Obama strongly suggested that he would eventually be tried in court, which presumably means he will at some point have a lawyer (something that Graham, along with John McCain and Liz Cheney, last night opposed). But the Obama DOJ also announced that they intended to question him "extensively" -- their word -- before reading him his Miranda rights, as Graham advocated in the second and third tweets quoted above. And the DOJ said they intend to question him not just about matters relating to immediate threats to the public safety -- are there other bombs set to go off? Is there an accomplice on the loose preparing to kill? -- but also, again in their words, "to gain critical intelligence."

Graham's tweets quickly created a firestorm of outrage among various Democrats, progressives, liberals and the like. They insisted that such actions would be radical and menacing, a serious threat to core Constitutional protections. I certainly shared those sentiments: the general concept that long-standing rights should be eroded in the name of Terrorism is indeed odious, and the specific attempt to abridge core constitutional liberties on US soil under that banner is self-evidently dangerous.

Related Topic(s): Boston Marathon Explosions; Domestic Policy; Miranda Rights; Ndaa; Tsarnaev Dzhokhar, Add Tags
Add to My Group(s)
Go To Commenting
The views expressed herein are the sole responsibility of the author and do not necessarily reflect those of this website or its editors.