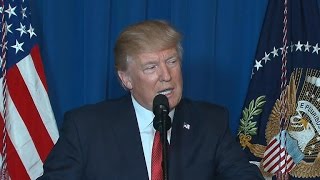 Trump speaks after cruise missile launch President Trump addressed the nation shortly after the U.S. launched a cruise missile strike against Syria. He is in Mar-a-Lago for a summit meeting with the ...
(Image by YouTube, Channel: CBS News)   Details   DMCA

Now that President Trump has puffed out his chest attacking Syria in retaliation for Syria's President Bashar Assad alleged sarin gas attack last week, it just feels like waiting for the next shoe to drop.

Oh sure this could be a one-time strike by Trump-a flexing of muscles and nothing more-at least for the present.

As for Russia it's response beyond condemning Trump's attack has been to suspend its Memorandum of Understanding with the US over each other's air operations in Syria and sending a missile frigate to its naval base in Tartus, Syria.

Secretary of State Rex Tillerson still plans to be in Moscow tomorrow. It'll be interesting to see what becomes of his scheduled meeting with Russian Foreign Minister Sergey Lavrov, and possibly President Putin himself. Tillerson and Lavrov spoke with each other on Saturday in a call initiated by Tillerson. In that call Lavrov called the allegations of the Syrian military using chemical weapons "do not correspond to reality" while he called for a "thorough and impartial" investigation over the incident.

But who knows what the "Donald" will do next.

Meanwhile a few members of Trump's administration went on the Sunday talk show circuit including Tillerson who callied Russia "incompetent" for allowing Syria to hold onto its chemical weapons and interfering in Europe's elections as it did earlier in the US presidential election-all unfounded allegations and assertions of course while Syria's chemical weapons were removed by 2014 under the oversight of the UN's "Organization for the Prohibition of Chemical Weapons".

In remarks on CNN the crazed UN Ambassador Nikki Haley said, "We know there's not any sort of option where a political solution is going to happen with Assad at the head of the regime. If you look at his actions, if you look at the situation, it's going to be hard to a government that's peaceful and stable with Assad". That was calm compared to her mouthing "nothing is off the table", "you're going to continue to see the United States act when we need to act" and warning Trump "won't stop here. If he needs to do more, he will do more." God help us.

As for Trump's National Security Adviser, H.R. McMaster he said, "What's significant about the strike is not that it was meant to take out the Syrian regime's capacity or ability to commit mass murder of it's own people, but it was to be a very strong signal to Assad and his sponsors that the United states cannot stand idly by as he is murdering innocent civilians." This from the guy who was one of the leaders in charge of the US siege on Fallujah, Iraq in 2004 killing hundreds of innocent civilians in the process of destroying the city. Well so much for his compassion for the murder of "innocent civilians".

In contrast to the Trump gang and the complicit MSM doing its part in the triumphalism surrounding Trump's retaliatory strike, here's a statement from Viktor Ozerov, the head of the Russia's upper house "Defence and Security Committee" stating the day after the attack, "Russia does not intend to get involved in an armed standoff with the United States there-in Syria-our task there is to support the Syrian military forces in their fight against terrorists, this is the task we have a mandate for".

That's all well and good but what if Russian forces are killed by US forces in Syria" What then?

Let's face it Tillerson talking with and meeting with Lavrov is a good thing. But international diplomacy is not a US forte and Tillerson's latest statements about Russia over the weekend saying Russia was "incompetent" doesn't bode well for any renewed detente with Russia or for positive negotiations to end the war in Syria.

Stay tuned. We should know more after Tillerson leaves Moscow.

Retired. The author of "DECEIT AND EXCESS IN AMERICA, HOW THE MONEYED INTERESTS HAVE STOLEN AMERICA AND HOW WE CAN GET IT BACK", Authorhouse, 2009
Related Topic(s): Retaliation; Syria, Add Tags
Add to My Group(s)
Go To Commenting
The views expressed herein are the sole responsibility of the author and do not necessarily reflect those of this website or its editors.