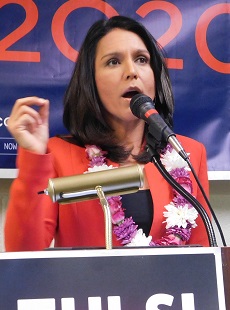 Tulsi Gabbard in Culver City CA
(Image by Henry Samson)   Details   DMCA
Gabbard dares to tread where other Democratic Presidential candidates fear. Following the arrest of Julian Assange, Tulsi did multiple interviews attacking his arrest. She tweeted about the threat his arrest poses to us all.

"The arrest of #JulianAssange is meant to send a message to all Americans and Journalists: be quiet, behave, toe the line. Or you will pay the price."

On Tulsi's birthday, April 12, 2019, she spoke to a packed house at an unadvertised event in Culver City,CA, that was supposed to be a small gathering. Again the crowd was bigger than the venue. As the only peace candidate running for the Democratic nomination, Tulsi spoke about the risk of nuclear war, a real risk that could endanger everyone on the planet. The other Democratic candidates are refusing to address this risk. Currently, America is the closest to nuclear war than it has ever been. Tulsi is running to end this threat and save our lives. She opposes regime change wars, the drone strikes our government has been doing, torture and sanctions. Some have falsely presented her record to defame her. Her record shows that she is the one peace candidate running for the Democratic nomination for President.

Tulsi has pointed out that America's regime change wars are costly. Yet while there is always money for war, the people have been told there is no money for their needs .She feels this is wrong and must change.

Unlike the other candidates Tulsi has put forth legislation to require a return to paper ballots, something voting rights advocates have been demanding for years. This would have prevented the disastrous theft of the Democratic nomination of 2016 that resulted in a Donald Trump Presidency. While no other candidate has addressed the real problems with the election system, Tulsi is working to protect the rights of the voters. She never pushed the Russiagate nonsense, something that also sets her apart from every other Democratic candidate.

In Culver City, Tulsi addressed something else the other candidates won't touch, nuclear waste and environmental racism. In the morning, she joined other environmentalists in surving San Onofre. The other surfers pointed out to her the dangerous containers of nuclear waste overlooking the ocean. She spoke at the Culver City event of the dangers of nuclear power. She also talked about the concerns of a New Mexico resident over the government's plans to ship the waste to a Native American community l in New Mexico, threating the environment and health of the people living there as well. One of Tulsi's goals is to protect the planet by switching to safe, environmentally-friendly power sources. No other current Democratic candidate has dared to stand up against nuclear power.

San Onofre was permanently closed down in 2013 because there was no way to make it safe and its existance endangered the lives of millions of California residents. But they left the nuclear waste there. There never was a real evacuation plan and the containers of nuclear waste continue to pose a danger to people and children living in Southern California. The only Democratic candidate ever to show concern over the dangers posed by San Onofre Nuclear Generating Station (SONGS) besides Tulsi was 2004/2008 Presidential Candidate Dennis Kucinich.

Tulsi has proven to be the Democratic candidate with courage like no other. Because Tulsi Gabbard, easily reached the donation threshold to be on the debate stage, the Democratic Party is scared and today notified the campaign that the party is changing the criteria for the third and later debates. Wall Street and the war industry want Tulsi to disappear and the Democratic Party is changing the rules to try to make that happen. But Tulsi is not going away. She is currently doing better in numbers of attendees at her events than Bernie Sanders was at this time in 2015. Whatever challenge the Democrats throw at her, she will exceed, because she is the only one standing up for the people, against wars and for the freedom of the press.

After the event, she discussed concerns about the threat to our freedom resulting from the arrest of Julian Assange. Where are the other candidates and why don't they care?

Henry has been a professor of political science and legal ethics and an advisor to many successful candidates for public office. He is currently working on a book about the inequality crisis in America.
Related Topic(s): Arrest Of Assange; Assange; Environment; Gabbard-Tulsi; Increasing The Risk Of Nuclear War; Nuclear Powers; Nuclear War; Presidential Campaign Democratic; Presidential Candidates; San Onofre Nuclea Plant; (more...) Tulsi Gabbard; Wars, Add Tags  (less...)
Add to My Group(s)
Go To Commenting
The views expressed herein are the sole responsibility of the author and do not necessarily reflect those of this website or its editors.