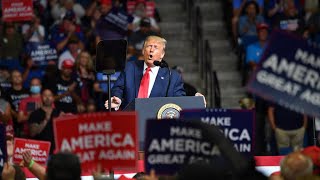 President Donald Trump's attempt to reignite his faltering reelection campaign with a mass rally in a conservative city turned into a political debacle Saturday night. Despite claims by his campaign than one million people had registered and that more than 100,000 would turn out for the event in Tulsa, Oklahoma, making it necessary to combine indoor and outdoor rallies, the turnout was poor and the outdoor portion was cancelled.

All the Trump supporters who came to Tulsa were able to fit easily inside the BOK Arena, with thousands of seats, including nearly the entire upper deck, showing empty on television camera sweeps. The Tulsa Fire Marshal estimated that only 6,200 people were seated inside the facility, which holds 19,200, although some press accounts suggested that the arena was roughly half full.

Campaign manager Brad Parscale and other top officials were apparently deceived by an anti-Trump campaign waged over social media by thousands of youth, many responding to a video appeal from an Iowa grandmother that went viral last week, urging people to register for the Tulsa rally and then not attend it, as a sign of opposition to the Trump administration.

The Trump campaign admitted that false accounts accounted for hundreds of thousands of the registrations for the rally, and they were reduced to touting the audience for the livestreaming of the rally as a sign of political support.

The rally was the first held by the Republican campaign in 110 days, which have been marked by the coronavirus pandemic and the mass protests against police violence triggered by the murder of George Floyd in Minneapolis, both of which have dramatically undermined Trump's political standing. He has fallen well behind his presumptive Democratic Party opponent, former Vice President Joe Biden, in both national surveys and polls in key states in the Midwest and South that are likely to determine the outcome in the Electoral College if the presidential election is close.

The mounting threat to his reelection clearly preoccupied Trump in the course of his 107-minute address in Tulsa, which meandered even more than usual. He was clearly far more concerned with his own political survival than with the survival of hundreds of thousands of Americans whose lives are threatened by the worst epidemic in a century. He made no mention of the human toll of the pandemic, which should have led local authorities to ban the rally on public health grounds, while remarking that he had told his aides to slow down the rate of coronavirus testing, which White House officials later claimed was a joke.

Trump began the speech with a declaration that "the silent majority is stronger than ever," reviving a Nixonian turn of phrase without apparently considering Nixon's eventual fate as the only president to be forced to resign. Then followed the usual praise of the performance of Wall Street ("the strongest 50 days in the history of the stock market"), always the central focus of the White House.

The Republican president howled that the Democratic Party -- the other half of the right-wing two-party system controlled by the US financial aristocracy -- was in the grip of "left-wing radicals." While conceding that Biden was no radical, he claimed that his opponent was "a willing Trojan horse for socialists" and had "surrendered to the left-wing mob." He continued this fascistic rant against liberals like representatives Alexandria Ocasio-Cortez and Ilhan Omar.

Perhaps most significantly, Trump made not the slightest overture to the protesters who have filled the streets over the past month denouncing police brutality and racism. He made no mention of George Floyd, Breonna Taylor, Ahmaud Arbery, or Rayshard Brooks, all victims of racist murders by white policemen or vigilantes linked to the police.

Instead, he declared, "As president, I will always support the incredible men and women of the law enforcement." He gloated about his mobilization of National Guard troops in Washington, D.C. against the protesters there. And he denounced efforts to remove the statues of Confederate generals, which he described as an effort to "desecrate our monuments, our beautiful monuments," and as a "cruel campaign of censorship."

Trump had earlier threatened protesters planning to go to Oklahoma, "Please understand, you will not be treated like you have been in New York, Seattle, or Minneapolis. It will be a much different scene!" In the course of his speech, he suggested shooting at the hundreds demonstrating outside the BOK Arena, saying, "When you see those lunatics all over the streets, it's damn nice to have arms."

Some Trump supporters displayed military-style rifles, but there were no clashes with counter-demonstrators, who were walled off from the Trump venue by Tulsa police and hundreds of National Guard troops, some of them carrying weapons.

One Catholic school art teacher with a ticket to the event was arrested at the orders of the Trump campaign because she was wearing a T-shirt bearing the statement, "I can't breathe," the last words of George Floyd as a Minneapolis cop ground his knee into Floyd's neck for nearly nine minutes. The fear of such an innocuous opponent only demonstrates the extremely beleaguered character of the Trump campaign and the Republican Party as a whole.

Trump has suffered a recent series of political setbacks in the courts that suggest that important sections of the ruling elite have turned sharply against him. Last week the U.S. Supreme Court issued surprise rulings that shocked the Trump White House, both for their content and because of the judicial line-up revealed.

Patrick Martin writes for the World Socialist Website (wsws.org), a forum for socialist ideas & analysis & published by the International Committee of the Fourth International (ICFI).
Related Topic(s): Coronavirus; Daca; Rally; Trump Against Democracy; Trump Crime; Trump Rally, Add Tags
Add to My Group(s)
Go To Commenting
The views expressed herein are the sole responsibility of the author and do not necessarily reflect those of this website or its editors.